Unidentified body left in Mediterranean for almost 3 weeks despite requests by rescue group to Libya, Italy and Malta. 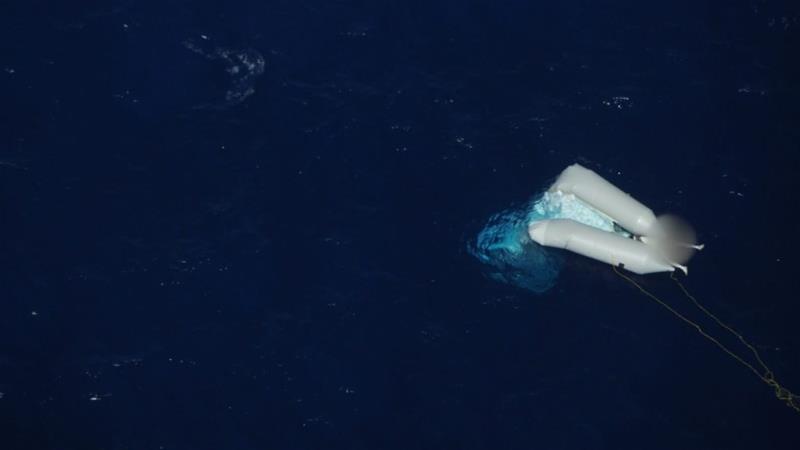 An unidentified body drifting in international waters within the Libyan search and rescue (SAR) zone for almost three weeks is yet to be retrieved despite repeated requests by a rescue group operating in the Mediterranean.

A photo taken on June 29 by Seabird, a monitoring aircraft operated by the search-and-rescue group Sea-Watch, shows the body facing down in the Mediterranean’s rough waters, entangled in a half-sunk grey dinghy.

Sea-Watch told Al Jazeera on Friday the body was still floating even though the group immediately alerted authorities in Libya, Italy and Malta and sent three more requests since.

It added that repeated calls for authorities to clarify how the rubber boat was damaged and the whereabouts of any other passengers on board were not answered.

While each state has the responsibility to conduct search and rescue operations within a defined zone, the International Convention on Maritime Search and Rescue stipulates they have the obligation to intervene in the zone of another state if it fails to respond to a help request from that area.

“When then the bodies are not retrieved and identified, and their relatives are not informed about their death so that they can mourn, and when these dead are not laid to rest, it shows the last bit of dignity that the EU had has drowned with these people,” said Neeske Beckmann, pilot and coordinator of Seabird’s operations.

“The thought that this has been normalised or sometimes ignored is horrifying,” Federico Soda, head of the IOM’s mission in Libya, told Al Jazeera. “We need to remember that these are people, who have parents, siblings and loved ones.”

In 2015, the picture of a lifeless three-year-old Syrian boy, Aylan Kurdi, washed ashore a Turkish beach, shocked the world, highlighting the plight of people escaping conflict, brutality and hardship.

“It seems that while these horrific tragedies and images may have shaped public opinion and affected government policy in the past, it is generally not the case anymore,” said Soda.

Giorgia Linardi, a spokesperson for Sea-Watch, said the situation with the unidentified body reflected the increasing lack of collaboration by authorities in carrying out rescue efforts.

“They wait for hours, leaving people in agony with the thought that they could even die,” Linardi told Al Jazeera.

On Friday, Malta’s coastguard rescued 65 migrants and refugees who were at sea for 30 hours despite AlarmPhone – a hotline for migrant boats in distress – repeatedly notifying Maltese and Italian authorities of the vessel’s position and broken engine.

The European Union has reportedly sent hundreds of millions of dollars to Libya, the main departure point for people trying to reach Europe from Africa, including large sums to fund the Libyan coastguard to stop the attempted crossings.

According to the UN, at least 36,000 people have been intercepted over the last three years by the Libyan coastguard and returned to the war-torn North African country, where they endure harrowing conditions, including in “official” detention centres.

According to Linardi, the states’ collaboration in the Mediterranean has worsened since the signing of a 2017 memorandum between Italy and Libya’s internationally-recognised Government of National Accord (GNA).

The deal marked a shift in Italy’s approach to migration, with a focus on preventing people from entering the country rather than establishing routes for a safe passage through.

The agreement included funds for migrant detention centres in Libya and the training and financing of its coastguard, despite the well-documented human rights violations taking place in these camps and allegations of human trafficking around the coastguards.

On Thursday, the Italian parliament approved additional funding for the Libyan coastguard, sparking outrage among human-rights groups. The move came as Italian Interior Minister Luciana Lamorgese was in Tripoli for high-level talks aimed at boosting collaboration between the two countries in borders’ control.

The vote is “a defeat and a shame. Not for us. Not for the ONG. But for the human and humanitarian Italy”, human rights group INTERSOS said on Twitter.

“The actions of governments are a reflection of people’s will,” said IOM’s Soda.

“More than ever, we are seeing a hardening attitude towards these people [migrants and refugees], being translated into policy. Unfortunately, there is lack of leadership and moral authority to do what may be more difficult but right.”