What rule of six? Shocking footage shows police raiding packed Peckham nightclub and crowd dancing without facemasks in Gosport pub as string of venues are hit with fines and stripped of licences over Covid rule breaches

Police have released shocking footage of officers raiding a Peckham nightclub packed with revellers as it has its licence yanked for breaching Covid rules.

Officer’s from the Met visited Afrikiko Restaurant and Club in Old Kent Road, Southwark on six occasions between Friday, July 31 and Saturday, September 26.

On the final visit last month, they were blocked from entering before they raided the club and found 45 revellers in the basement.

Meanwhile, pubs across the UK are having their licences reviewed for repeatedly breaching Covid rules as police in Gosport, Hampshire are investigating a video which shows dozens of revellers dancing and singing inside without masks.

In London, video footage from the raid shows a DJ blaring loud music in a basement club room with coloured lighting and crowds of revellers not adhering to social distancing rules.

During the previous visits, officers found the venue was acting as a nightclub, contrary to coronavirus regulations, and failing to abide by social-distancing requirements and, on occasion, breaching curfew rules.

A number of breaches of the venue’s licensing conditions were also found to be taking place. 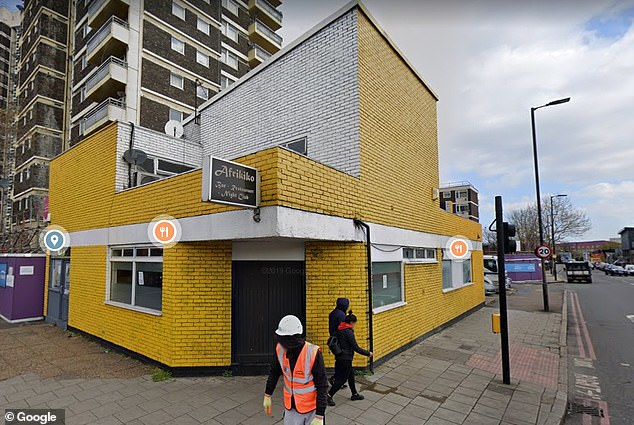 The Met says that despite numerous attempts to engage with staff at the premises and encourage them to abide by the new regulations, there were further deliberate breaches.

On the last visit, on Saturday, 26 September, officers were initially blocked from entering the premises and were told no one was inside.

When they gained entry they found more than 45 people concealed in the nightclub’s basement area.

The repeated flouting of the rules, and public nuisance which can include jeopardising public health, resulted in Southwark Police Licensing submitting a summary review of the venue to the Southwark Council Licensing Sub-Committee.

Following a hearing on Tuesday, 27 October, Afrikiko Restaurant and Club had its alcohol licence revoked. It has 21 days to appeal the decision. 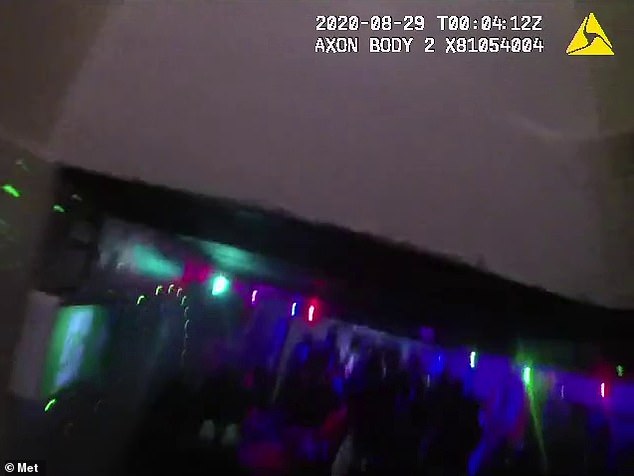 When officers from the Met Police force raided the nightclub, the found revellers in breach of social distancing rules partying in the club’s basement to loud music played by a DJ 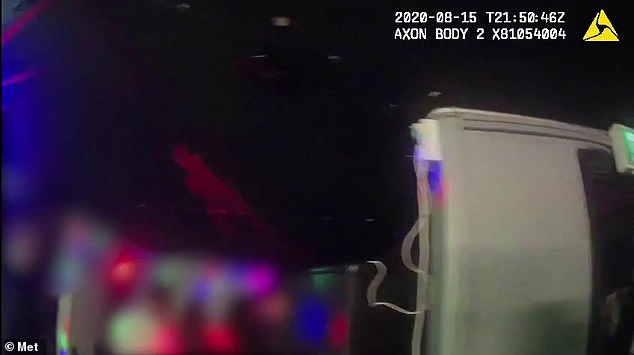 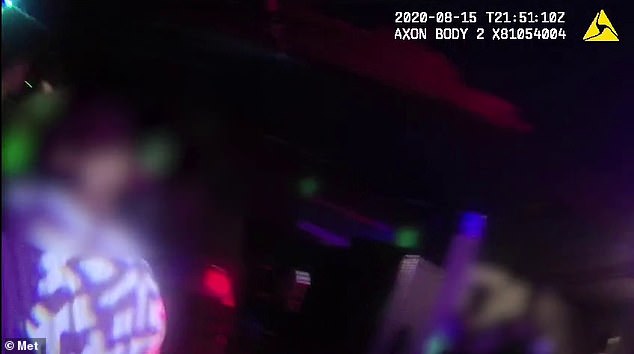 The Met says the club, in Peckham, has been the subject of numerous visits by the force for breaching coronavirus rules and has now resulted in the club having it’s licence reviewed

Sergeant Keith Dempster from the South Central Command Unit said: ‘The Met is determined to protect Londoners by cracking down on the most deliberate and egregious breaches of the regulations that are putting everyone at risk.

‘As the spread of the virus continues, this type of intervention will become even more important, and the vast majority of Londoners who are abiding by the rules rightly expect us to be doing it.

‘We don’t want to take away people’s livelihoods – we would far rather they engaged with us and operated in a safe way for everyone.

‘However, by repeatedly operating as a nightclub, staff and patrons were exposed to a real risk of contracting and spreading Coronavirus, which would have affected London’s communities.

‘Breaching these measures could also play a part in increasing the chance of further lockdown measures being imposed in London that would hurt other businesses.

‘Whilst we will always look to engage with licensed premises and explain the new regulations, robust action will be taken against those that simply refuse to abide by the law and who, at the end of the day, put lives at risk.’

It comes as a large group was seen singing and dancing together without face masks at a pub in Hampshire.

A video shows a number of people on their feet inside the Jolly Roger pub in Gosport, singing and dancing while indoors and in a gathering of more than six. 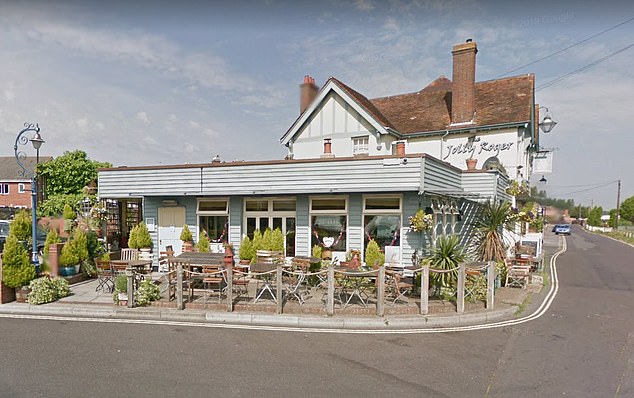 Captured by a member of the public, the clip is taken from outside of the pub and shows people joining in with Earth, Wind & Fire’s ‘September’ track at around 9.15pm on Saturday (October 24).

Hampshire Constabulary said on yesterday that it was investigating the incident at the Priory Road pub as a potential breach of coronavirus regulations.

Currently, Hampshire is subject to Tier 1 Government restrictions, meaning that people are allowed to mix with other households indoors provided they adhere to the rule of six.

Pubs are also required to only provide table service and everyone must wear a face mask while walking around the pub, unless exempt.

A police spokesperson said: ‘We were called at 10.05pm on Saturday October 24 to a report that patrons in the Jolly Roger pub on Priory Road in Gosport were dancing in a large group and not wearing masks.

‘We attended at 10.54pm and the establishment had closed for the evening.

‘We have since received two online reports of a video apparently showing a group of people dancing without face coverings and we are investigating this as a potential breach. 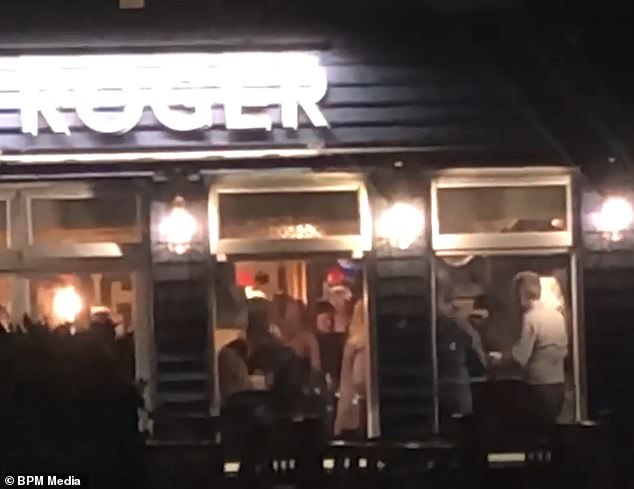 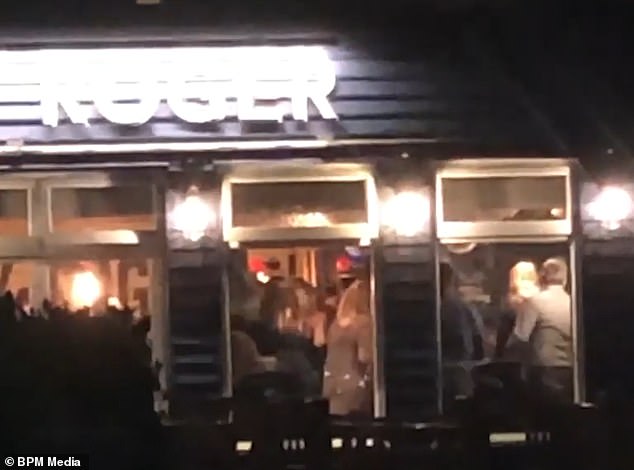 Video footage, which is being investigated by the police, shows dozens of pub-goers inside not adhering to social distancing rules as they danced to Earth, Wind and Fire’s September

‘We continue to work with local businesses and our partners to ensure that licensed venues are adhering to government guidelines to keep their customers and communities safe.

‘Those found to be in breach could face a fine. Enquiries are ongoing.’

Should police find any breach has occurred, the pub could face a fine of thousands of pounds for failing to adhere to the guidelines in place.

In the north of Hampshire, a pub in Aldershot was fined £1,000 earlier in October for breaching regulations.

The Royal Staff was handed the fine after police received complaints and saw customers standing at the bar, moving around the premises and not being seated while consuming drinks.

At the time, local licensing officer for police, PC Phil Dennett, said that the incident was a ‘clear disregard’ for the restrictions in place.

Hundreds have died after contracting coronavirus in Hampshire and thousands more have caught the virus which has caused a global pandemic.

Meanwhile, police in Birmingham have had two bars shut down for repeated breaches of regulations. 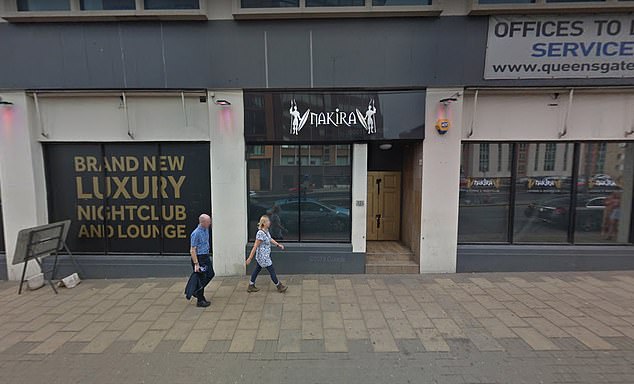 Nakira, in Birmingham city centre, has been closed after repeated Covid regulation breaches 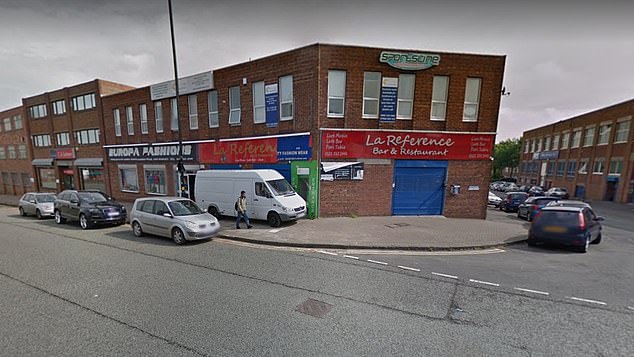 Nakira, at 121 Suffolk Street Queensway, in the city centre, and La Reference (Petite Afrique), in Hockley Hill, have both been closed while the council reviews their licences.

Police called for an expedited review of Nakira’s licence following a number of breaches, the most recent being that officers found it was operating past the 10pm curfew, with customers still inside the venue at 12.40am on Saturday September 26.

Similarly, police again called for an expedited review of La Reference’s licence following a number of breaches, the most recent being when officers found it was operating past the 10pm curfew, with customers still inside the venue at 10.25pm on the same day.

Councillor Philip Davis, chair of Birmingham City Council’s Licensing Sub Committee A, said: ‘All businesses have a responsibility – not only to their staff and customers – but to the wider community and there must be consequences when COVID-19 guidance is simply ignored.

‘This is potentially a matter of life or death and Birmingham City Council will continue to work with West Midlands Police to enforce the guidelines.

‘It is clear that the management at both venues failed to follow Government guidance and were operating with no regard for social distancing or public health.

‘The way in which these premises were being run was endangering the public by risking the spread of COVID-19: It is this kind of behaviour that has contributed to restrictions being placed on Birmingham to try and control the sharp rise in cases in the city.’

In Wales, two pubs have been closed down in Covid hotspots for not following proper protocol. 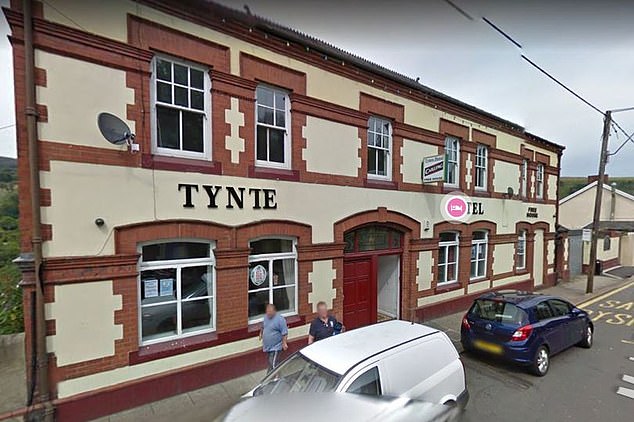 The Tynte Hotel, in Abercynon, has been closed after it was found to have failed to collect accurate test and trace details from customers.

Reports claim the pub was also not ensuring customers were using face coverings or adhering to social distancing rules while on the premises.

Meanwhile, at the Rock Inn, in Aberamen, Rhondda Cynon Taf, customers were allegedly allowed to fill in their own test and trace details, which led to fake names being used and potential GDPR breaches.

Similarly, there were also complaints of overcrowding and not adhering to social distancing protocol at the pub.