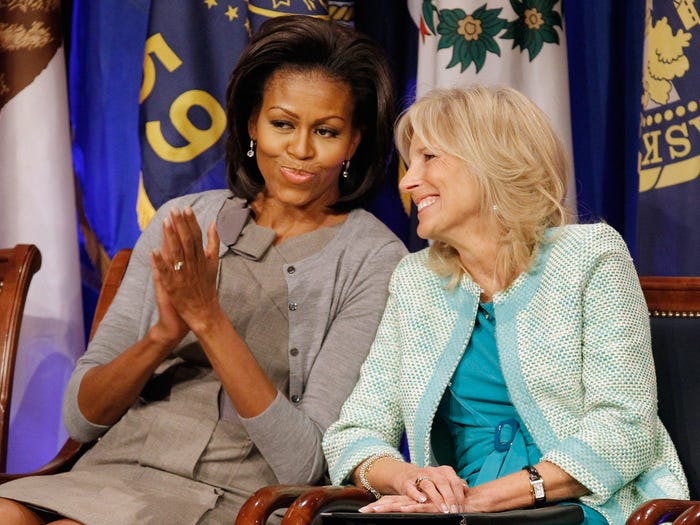 Michelle Obama and Hillary Clinton have defended Dr. Jill Biden after a Wall Street Journal op-ed urged the future first lady to drop her "Dr" title because she's not a medical doctor.

In the op-ed, which was published Friday, writer Joseph Epstein also referred to Biden as "kiddo."

"'Dr. Jill Biden' sounds and feels fraudulent, not to say a touch comic," he wrote. "Your degree is, I believe, an Ed.D., a doctor of education, earned at the University of Delaware through a dissertation with the unpromising title 'Student Retention at the Community College Level: Meeting Students' Needs.'"

The piece was swiftly criticized online. Among its critics were the Wall Street Journal's higher-education reporter, future second gentleman Doug Emhoff, and Jill Biden's spokesperson, who called it a "disgusting and sexist attack."

On Monday, Michelle Obama, who became close friends with Biden in the White House, wrote an Instagram post highlighting Biden's career and pointing out how women's professional accomplishments are often questioned or ridiculed.

"For eight years, I saw Dr. Jill Biden do what a lot of professional women do—successfully manage more than one responsibility at a time, from her teaching duties to her official obligations in the White House to her roles as a mother, wife, and friend," she wrote. "And right now, we're all seeing what also happens to so many professional women, whether their titles are Dr., Ms., Mrs., or even First Lady: All too often, our accomplishments are met with skepticism, even derision. We're doubted by those who choose the weakness of ridicule over the strength of respect. And yet somehow, their words can stick—after decades of work, we're forced to prove ourselves all over again. Is this really the example we want to set for the next generation?"

She called Biden "a brilliant woman" and role model, who is always striving "to lift others up, rather than tearing them down."

Former first lady, senator, secretary of state, and presidential candidate Hillary Clinton got right to the point with her own post: "Her name is Dr. Jill Biden. Get used to it."

Both former first ladies are familiar with the gendered scrutiny that accompanies the role. Hillary Clinton was forced to spend weeks apologizing after she said "I suppose I could have stayed home and baked cookies and had teas, but what I decided to do was to fulfill my profession" when speaking about her law career during Bill Clinton's first presidential campaign. Michelle Obama also faced racist as well as sexist coverage during her time as first lady.

"Since stepping reluctantly into public life, I've been held up as the most powerful woman in the world and taken down as an 'angry black woman,'" Obama wrote in the preface of her 2019 memoir "Becoming." "I've wanted to ask my detractors which part of that phrase matters to them most—is it 'angry' or 'black' or 'woman'?"

Biden holds a bachelor's degree, two master's degrees, and a doctorate of education from the University of Delaware, and has taught for more than three decades. She plans to continue teaching at community college as first lady, and would be the first FLOTUS in US history to hold a full-time job.