Fears are growing today that France will be added to the UK’s quarantined travel list within days, leaving thousands of Brits facing weeks in isolation upon their return.

Ministers are believed to be planning new measures for a swathe of countries that also includes Switzerland, Poland and the Netherlands amid a surge in European coronavirus cases.

They could join Spain and its islands on the list of countries where returnees will face 14 days of self-isolation, possibly putting their jobs at risk.

It came as Boris Johnson warned that  ministers will ‘not hesitate’ to impose a quarantine system for travellers from other countries to the UK if needed.

Speaking on a visit to a school in Upminster, Essex, he said: ‘I don’t want to advise people about their individual holidays, individual decisions, they should look at the travel advice from the Foreign Office clearly.

‘But what I will say, and I hope people would expect us to do this, in the context of a global pandemic, we’ve got to keep looking at the data in all the countries to which British people want to travel.

‘Where it is necessary to impose restrictions or to impose a quarantine system, we will not hesitate to do so. 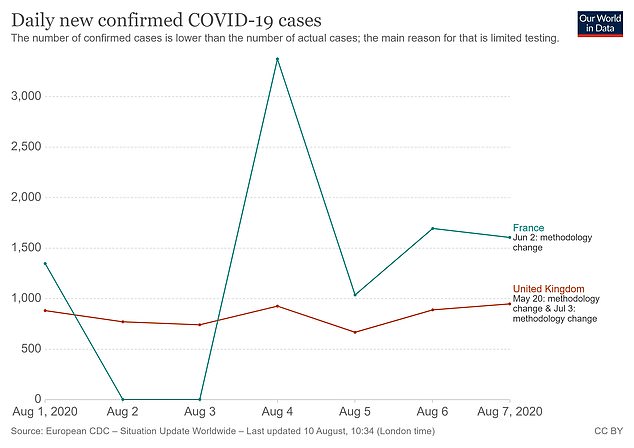 France has piled up 10,002 new cases in the last week, the highest number since April and a sharp increase from 7,391 the week before 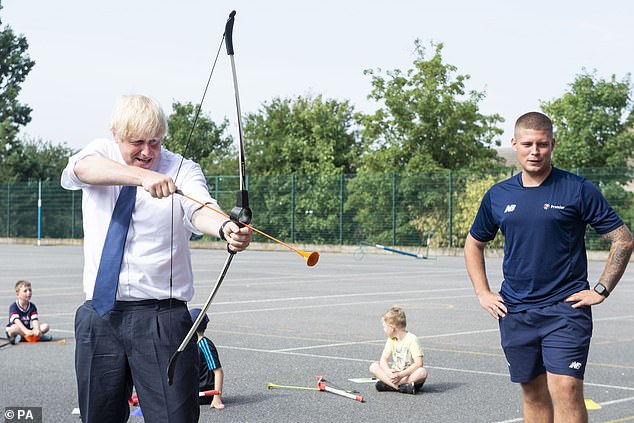 ‘It’s been a huge effort for the entire population of this country to get the disease down to the levels that we are currently seeing, but we do not want reinfection and that’s why we’ve got to keep a very, very close eye on the data in destinations around the world.’

Spain has already been hit with new travel restrictions in a blow to its tourism-reliant economy, while there are fears that France, Germany or Holland could be put back on the UK’s quarantine list after spikes in cases there.

Summer holidays have been blamed for rising cases in Germany and Italy, while France has tightened its face mask rules in tourist hotspots such as Paris and the Mediterranean resort of Saint Tropez.

However, Europe has yet to see a major spike in deaths or hospital cases, amid signs that many of those testing positive are young and less vulnerable to the disease.

France has piled up 10,002 new cases in the last week, the highest number since April and a sharp increase from 7,391 the week before.

The government’s Covid-19 scientific council warned last week that France could ‘at any moment’ lose control over the spread of the disease.

Some French towns are now requiring face masks outdoors, including the Mediterranean resort of Saint-Tropez and other tourist areas.

Paris and Marseille, the two largest cities in France, have both ordered mask-wearing in crowded outdoor areas such as open-air markets and the banks of the Seine.