Incensed villagers circumcised a bogus ‘healer’ who illegally carried out the operation on 21 teenage boys in South Africa.

The man was confronted after they learned he had not undergone the procedure, which is considered a rite of passage in many societies.

It was not the first time he had been outed as uncircumcised, according to Nkozazana Malable from Nqanda village in the Eastern Cape.

Villagers then took matters into their own hands and forcibly removed his foreskin. 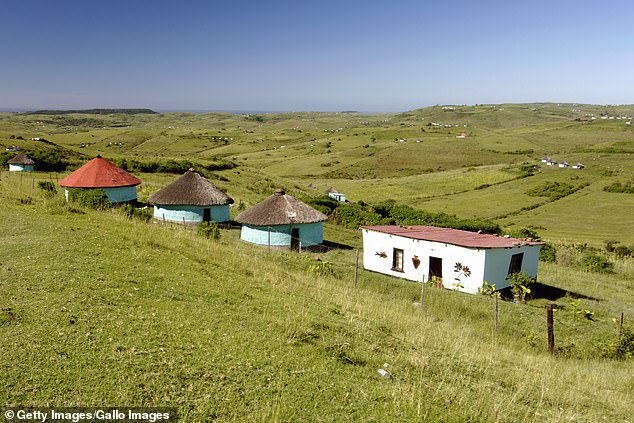 A rural area of South Africa’s Eastern Cape, where hundreds of boys have died after being circumcised

Male circumcision is one of the most commonly performed procedures in Africa and some 30,000 boys undergo the traditional initiation into manhood every year.

Youths typically spend weeks living in temporary shelters with minimal sleep, food and water ahead of the ceremony.

But hundreds of those who have the operation die following complications or botched attempts by unqualified doctors.

In the Eastern Cape and Limpopo provinces at least 419 boys have died since 2008 and more than 456,000 initiates have been hospitalised with complications.

HOW ARE CIRCUMCISIONS PERFORMED?

The baby will be strapped down to avoid movement.

Next, he will have either a topical anesthetic applied to the surface of the penis or have numbing agents injected into the penis or around its base.

One of three different types of clamps or devices – the Gomco clamp, Mogen clamp or Plastibell device – is used to separate the glans from the foreskin and crush or cut a ring of skin from the penis.

The clamps provide for an immediate procedure, while the Plastibell device stays attached for several days before falling off.

Usually the baby will feel better within three to four days, but he can be taken home that same day.

Appearance of the area improves within a week.

Men can choose between receiving a general or a local anesthetic.

A dorsal slit is usually made – a cut from the top of the skin – all the way down to the rounded border at the base of the glans.

The foreskin is held away from the penis and carefully cut off. The remaining skin is then sutured around the glans.