Gang who posed as police before kidnapping man, bundling him into fake squad car and demanding £100,000 ransom are jailed for more than 48 years

A gang who posed as police to kidnap a man by bundling him into a fake squad car then demanded a £100,000 ransom have been jailed for more than 48 years.

Pardeep Thandi was ambushed seconds after leaving his home in Bromley, south east London, at about 11.20pm on December 22, 2016.

The violent gang chased him down and savagely beat him, forcing him to the ground ‘like a pack of dogs’ before bundling him into a black Audi with flashing blue lights. 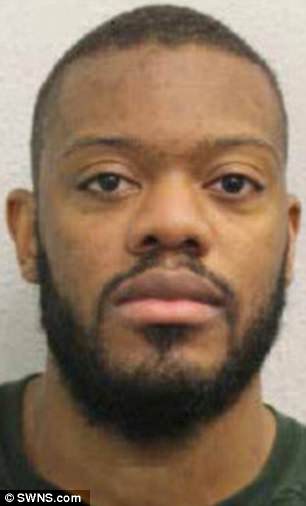 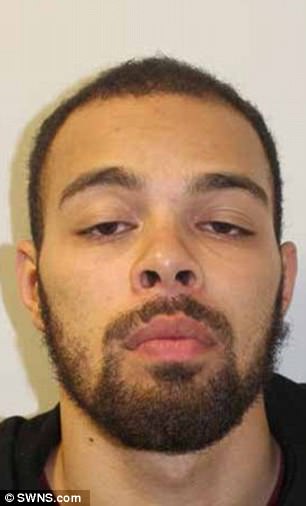 The thugs held the terrified man for seven hours and made menacing calls to his elderly mother and relatives demanding more than £100,000 for his release.

At one point neighbours saw him desperately scrambling out of the car on his hands and knees before Conrad and Reece Jackson punched him and threw him back in.

Mr Thandi was not released until just before 7am when it became clear the gang’s demands for money would not be met.

Sentencing them on May 8, Judge Mark Bishop said: ‘It was a ruthless act of violence, snatching someone off the street and subduing him with violence.

‘One witness described it as a frenzied attack, like someone being set on by a pack of dogs, at one point she thought the victim was dead.

‘The demands made were chilling and threatening, demanding at one stage £100,000.

‘There can be no doubt that this experience would have been frightening and shocking for the family.’ 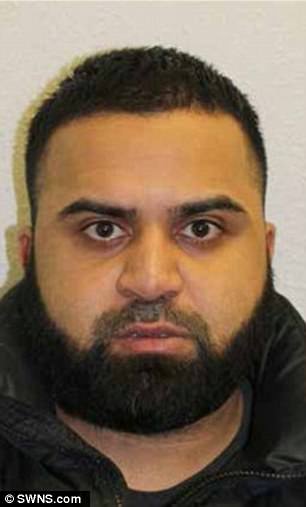 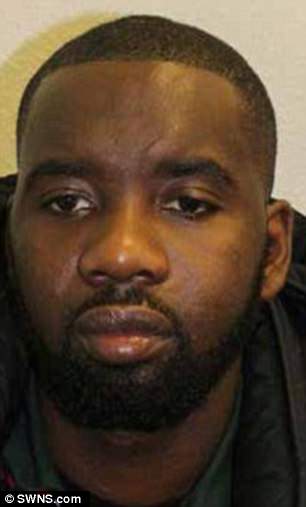 Conrad Jackson, 25, a Business Management student at London Metropolitan University, was said to be the ‘intellectual’ ringleader of the gang who drove the car.

He was joined by Reece Jackson, also 25 – described as the ‘muscle’ behind the operation.

CCTV played for jurors showed ‘inside man’ and father-of-three Amir Sahir, 29, spying on Mr Thandi from a second car before the attack.

He lived on the same street as the victim and let Conrad and Reece know when they should pounce.

Fourth conspirator Zephan Rollins, 30, was said to be ‘centrally involved’ in the blackmail.

He had recently been released on licence from a ten-year jail term for possession of a firearm. 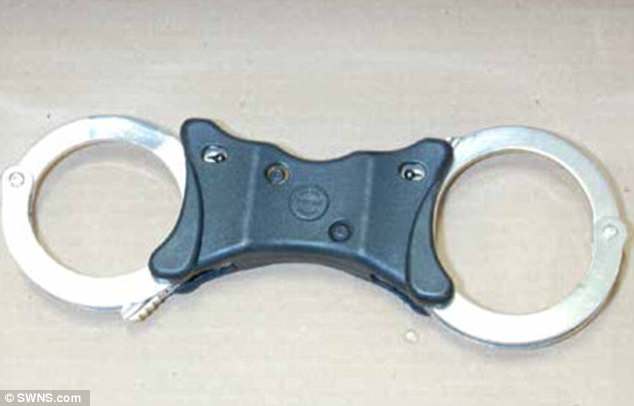 A set of handcuffs recovered from the black Audi being driven by Conrad Jackson during the kidnap. It also contained stab vests and cable ties

Prosecutor Michael Bisgrove previously told the court: ‘Mr Thandi was on the road outside his home address. A black Audi vehicle pulled up with blue lights flashing.

‘One of the two men in the vehicle got out and ran towards Mr Thandi.

‘Mr Thandi ran away. He was pursued by the man on foot and by the Audi vehicle which was reversed at speed.

‘A short distance away Mr Thandi was caught up with. He was assaulted.

‘Neighbours saw and heard him being punched and kicked to the floor, picked and put into the back of the Audi which drove away at speed.

‘Over the next seven hours or so, a number of telephone calls were made.’ 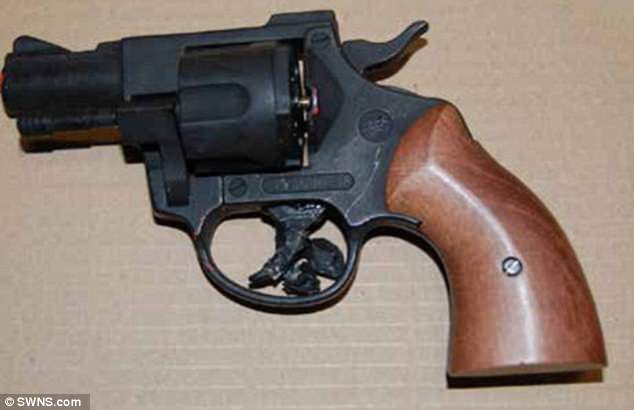 An imitation firearm recovered from the kidnap vehicle. It was shot while the victim was inside

He said the calls to the victim’s family were ‘particularly to his brother and his elderly mother’ – demanding ransoms which ‘at times were in excess of £100,000’.

‘They threatened to shoot Mr Thandi and indeed an imitation firearm was present,’ said Mr Brisgrove, adding that it was discharged in the car.

‘Mr Thandi was eventually released shortly before seven the following morning when it became clear the demands were not going to be met.’

Conrad Jackson, of Bromley, south east London, was jailed for 15 years for his role in the crime, as well as drugs offences and possession of criminal property.

Reece Jackson, of Finsbury Park, north London, was jailed for 12-and-a-half years for his part in the kidnap, possession of cannabis and taking a conveyance without authority.

Sahir, of Bromley, south east London, was jailed for ten years for his role in the kidnap.

He was also banned from driving for six years because he drove while disqualified when he was spying on Mr Thandi from a car in the street they both lived on.

Rollins, of Bromley, south east London, was jailed for 11 years for his part in the kidnap.