Government borrowing rocketed to a record high of almost £36 billion in June this year as ministers scrambled to find the cash to pay for the coronavirus crisis.

The Office for National Statistics said the pandemic has had an ‘unprecedented impact on borrowing’ with the amount taken out last month five times higher than in the same period last year.

The amount borrowed in June represents the third highest amount for any month on record, according to the ONS, with the preceding May and April the other two record-setters.

It means borrowing in the first quarter of the current financial year was more than double that seen in the whole of the previous year.

However, the £35.5 billion borrowed in June does represent a substantial drop on the previous month when borrowing was at estimated £45.5 billion.

The staggering numbers will increase fears about the long term economic damage done to UK PLC by the coronavirus outbreak. 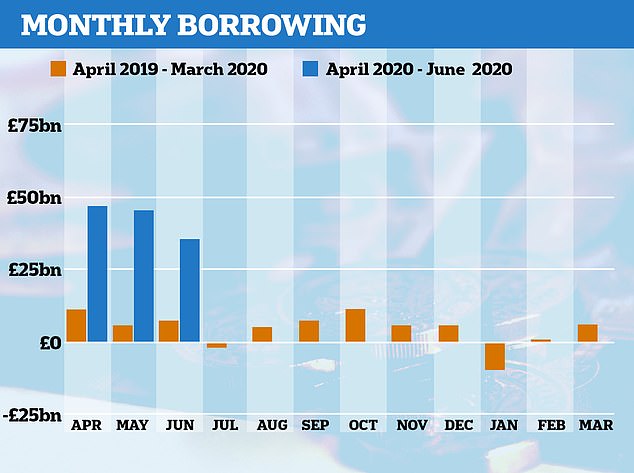 Office for National Statistics data published today showed public sector borrowing hit its highest ever levels in April, May and June of this year 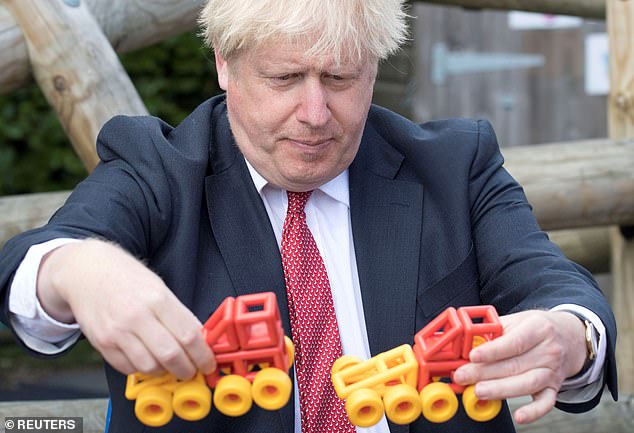 Boris Johnson’s Government borrowed an estimated £35.5 billion in June with total borrowing in the first quarter of the financial year at almost £130 billion

The latest numbers published by the ONS show that borrowing in the first quarter of this financial year is estimated to have been £127.9 billion.

That is almost £104 billion more than was recorded in the same period last year.

It is the highest borrowing ever recored in any April to June period with records having started way back in 1993.

Each month of borrowing in April, May and June this year constituted a record for that month.

Overall, the provisional estimates suggest borrowing in the first quarter of the current financial year was more than double what was borrowed in the whole of the last financial year running from April 2019 to March 2020.

The ONS said that borrowing levels seen during the coronavirus crisis were ‘unprecedented’ for a UK government.

‘The coronavirus (COVID-19) pandemic has had an unprecedented impact on borrowing,’ the stats watchdog said.

However, the ONS did say the figures need to be viewed carefully because they are ‘subject to greater than usual uncertainty’ and could be revised.

For example, borrowing in May this year was revised down by almost £10 billion to £45.5 billion after the emergence of stronger than previously estimated tax receipts and National Insurance contributions.

The borrowing numbers for the past three months have had a massive impact on the overall level of public sector debt.

That represents an increase on the same point last year of £195.5 billion.

Public sector debt at the end of June 2020 as a percentage of gross domestic product was 99.6 per cent.

That is an increase of almost 19 per cent when compared to the figure recorded at the same point last year.

It is also the highest debt to GDP ratio recorded in the UK since the financial year ending March 1961, according to the ONS.