Three generations of the same family have restored their beloved late grandfather’s miniature railway and set it up in their back garden – and it has become a popular tourist attraction.

David Page, 33, from Woodwalton, Cambridgeshire, grew up learning about model trains and loved learning to control them with his grandfather, David Keatley, from the age of three.

But the railway fell into disrepair when Mr Keatley died in 2011 and it took hard work from his grandson to restore the 50 locomotives and tracks to their former glory. 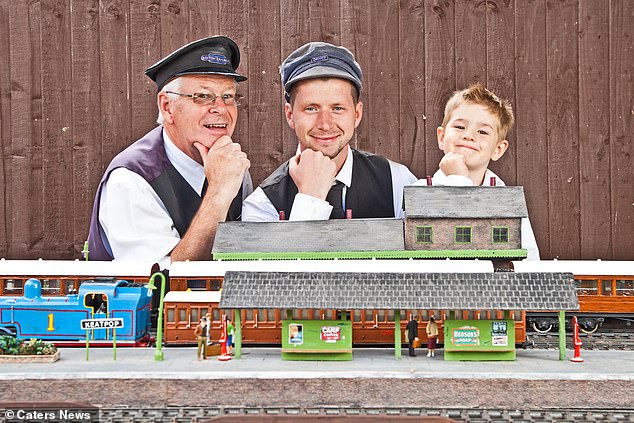 Three generations of the same family have built a miniature railway across their back garden – and it’s so impressive that it’s now a popular tourist attraction. Above: David Page (centre) with his father Ivan and son Jacob at their home in Little Paxton, Cambridgeshire 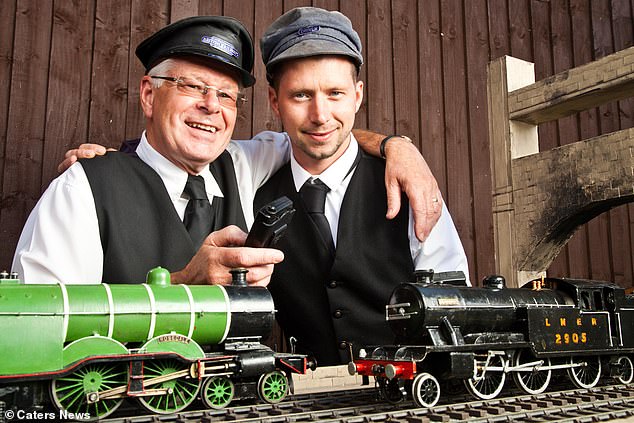 The family give members of the public the chance to check out their railway and in return they make a small donation which goes to charity. They have raised £2500 since 2017. Above: Mr Page, his son Jacob and his father all admire the miniature railway 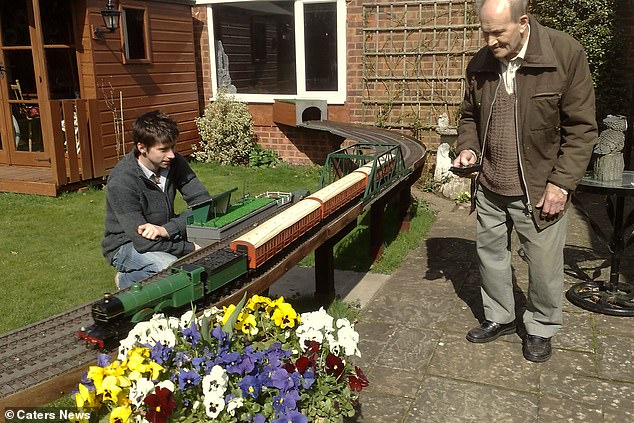 Mr Page grew up learning about model trains and loved learning to control them with his grandfather, David Keatley, from the age of three. Above: Mr Page watches his grandfather he controls the trains on his beloved railway

And the railway has raised £2,500 for charity since the family allowed members of the public to come and see it.

In revamping the miniature trains, delivery driver Mr Page used only his memories of watching his grandfather.

Along with his father Ivan, 64, he replaced the deteriorating parts with fresh materials and installed a model village which helped it to become a tourist attraction.

Mr Keatley’s devotion to the railway saw it grow bigger and bigger – taking up most of his wife’s back garden, and even looping through the house and shed. 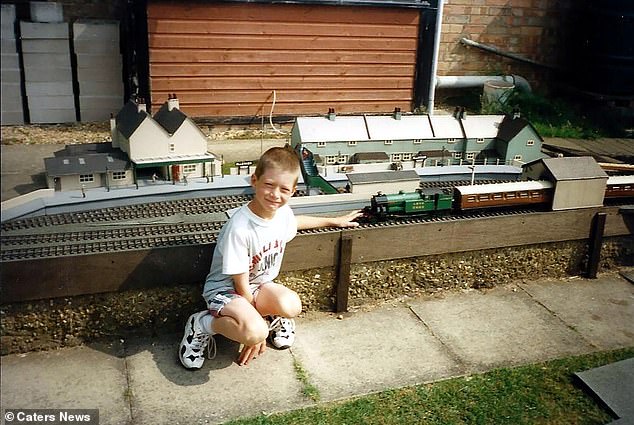 The railway became so large that it even looped through the house and shed. Above: A five-year-old Mr Page stands in front of the railway 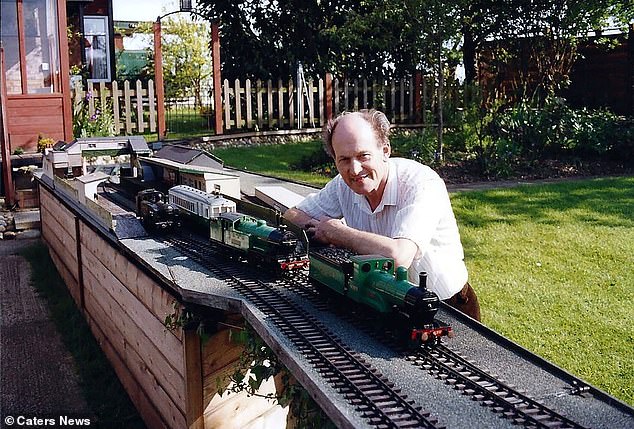 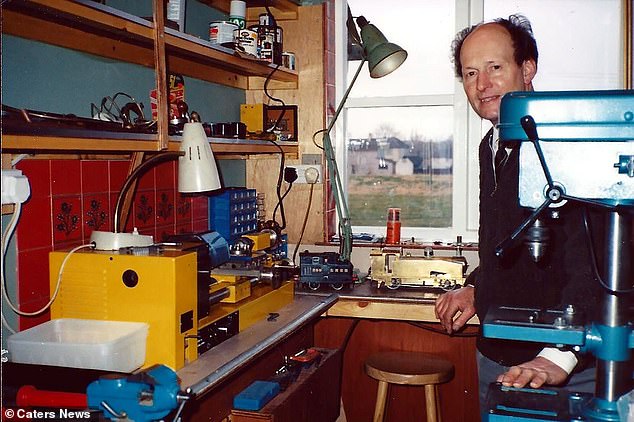 He had a workshop devoted to his miniature railway-building. Above: Mr Keatley in his workshop 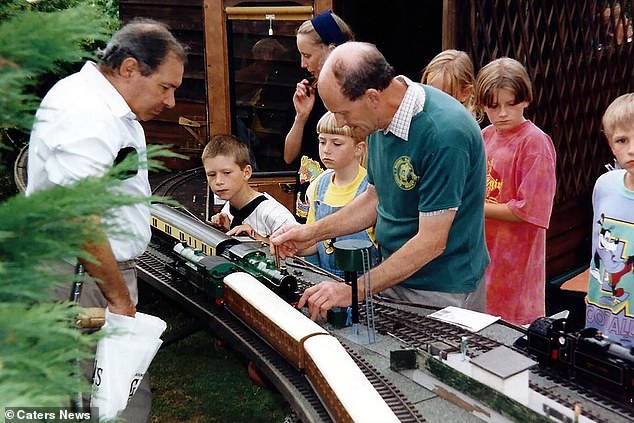 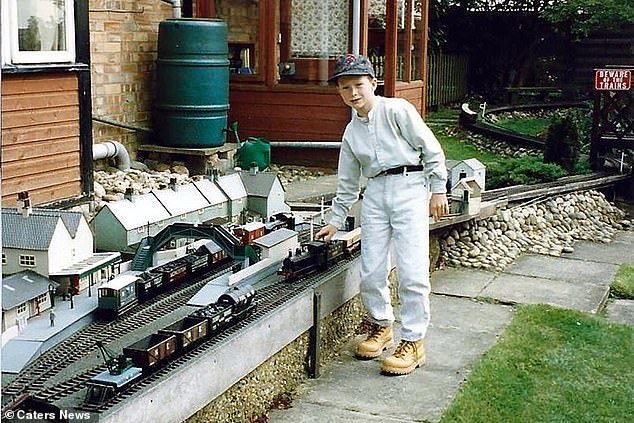 Father-of-three Mr Page said: ‘My grandad who was an engineer and built everything from scratch, he didn’t have any instructions just sheets of metal.

‘He originally spent a year building the railway in 1986 but continued to extend the tracks and years later my grandparents moved to the bungalow where it is now, and he rebuilt it.

‘When he passed away, the wood was old, and locomotives were no longer in use, so it was important for my family and I to fix it back up.

‘I learnt from him you can build anything if you are willing to try so I brought all the trains home and put them on my dining table for longer than my wife Jane would have liked. 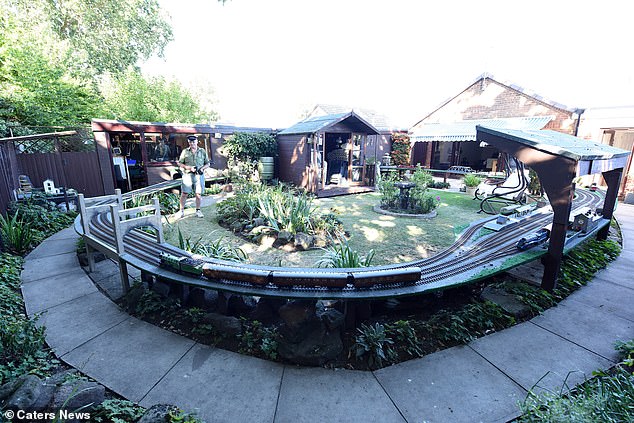 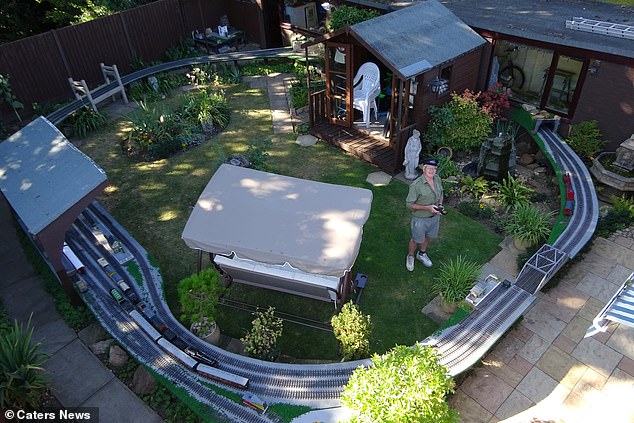 The railway’s extensive tracks form a huge ring around the family’s lawn, leaving some space in the middle and around the sides 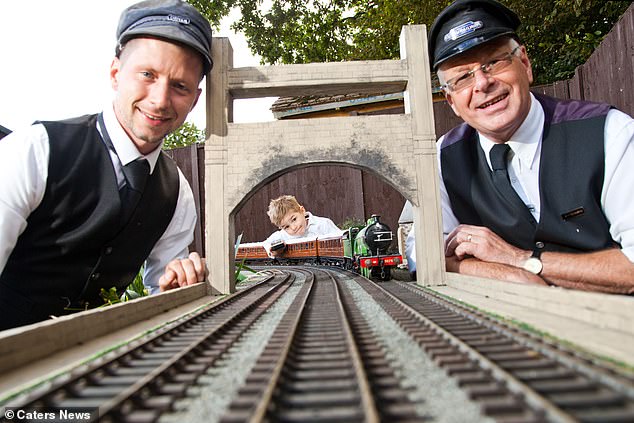 Mr Page restored the railway from knowledge he had built up through fixing them in his teenage years. Above: Mr Keatley, his son Jacob and father Ivan pose over the railway

‘It was like a trip down memory lane as everything reminded me of when I would watch my grandad build and fix them as a child.

‘I managed to remember what to do as he took me under his wing and let me fix them myself in my early teens.

‘He never once sat me down and taught me, I learnt everything I know from being there and watching him like my son Jacob, three, does now.

‘The railway runs around my parents garden and through the garage, my dad worked on the cosmetics and scenery whilst I do the engineering.

‘I have upgraded all the trains so they can now make real train noises and whistle.

‘Just two weeks ago, I managed to finally fix my granddad’s pride and joy the “Victoria” rail car, it is the only model which can stop and go without any human interaction.

Mr Page added that the railway was complex to fit and the family never thought it would run again so it was a special moment when his grandmother, Pauline, 91, and mother Sue, 59, witnessed it back up to speed. 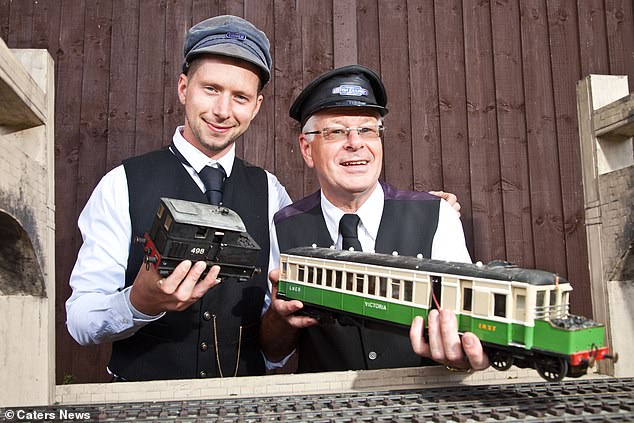 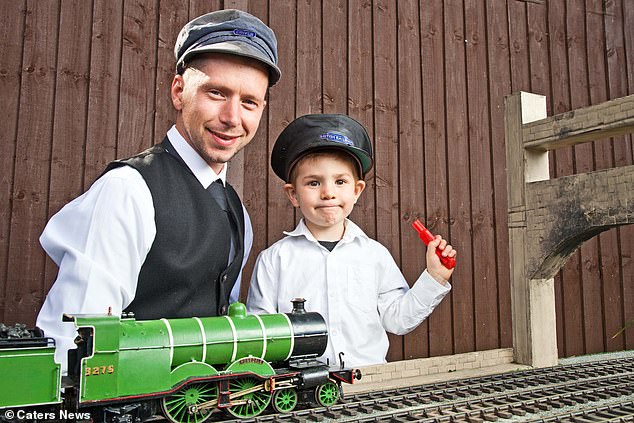 Mr Page is now passing his own knowledge onto his son, who looks delighted to be following in his footsteps

The railway can take up to 50 locomotives including Thomas the Tank engine, which are battery-run and directed using remote controls.

The Page family use the miniature railway to raise money for charities such as Marie Curie and The Three Pillars – Feeding The Homeless.

He added: ‘The railway has been in my life for as long as I can remember and spans across three generations, and it will be the same with my son too, who can already control some of the locomotives.

‘It is great that we can share it with other people who seem to enjoy it just as much as we do.’