Wellington: A pursuit, albeit slow, between a New Zealand cop car and a man on a mobility scooter has been captured on video.

The man is seen weaving his ride across a road in Timaru in the South Island, and in front of traffic, while a police car follows with its sirens on and lights flashing.

The police car is seen trying to intercept and stop the man a number of times, but he manages to evade them and hoon his scooter past, dodging heavy traffic and pedestrians in his bid for freedom.

The video was posted to Facebook on Thursday and has already been viewed more than 90,000 times by lunch time. Police confirmed the incident happened on Wednesday.

The man who sparked the slow speed pursuit said his newfound fame was "hilarious". 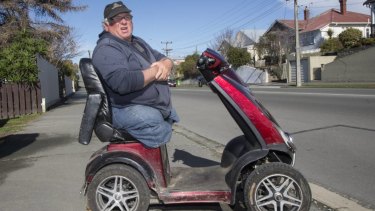 "It sounded like an ice cream truck and I didn't want any ice cream," double amputee Charlie Durham said.

Durham said he planned to turn himself into police on Thursday, but an officer knocked on his door that morning before he was out of bed.

He was told he had two infringement notices coming, one for failing to stop for red and blue flashing lights and the other for going too fast on a footpath.

Durham did not believe he had done anything wrong.

"I know there's a speed limit on the footpath, but I don't understand why it's not just in the city centre," he said.

"There's not much life on the footpath around here [Wai-iti Rd] and I can pretty much stop on a dime. I've never hit anybody." 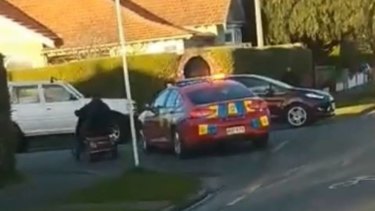 Double-amputee Charlie Durham failed to stop as directed by police.Credit:Screengrab

The woman who filmed the peculiar incident, Aleshia Candy, can be heard on the video saying "this is so funny".

"He's going for it. What is this old man up to?" Candy says.

Sergeant Stephen Burgerhout said he had "no opinion" of the video. He said the man on the mobility scooter had been signalled to stop, but did not.

"I believe it was because of the speed he was going on the footpath, and whether that was appropriate or not."

Speaking to Stuff in 2012, Durham called himself a “battler” as he described the cruel twists of fate that put him in a wheelchair.

"We have to battle on, don't we? We can't just sit back and die in the corner, can we?"

In 2007 he was working on a tugboat off New Brighton when a crewmate pulled in some slack wire and hooked it around a peg.

He had a prosthetic attached, got back to playing golf and even planned on returning to work.

But three years later, he collided with a car while riding his motorbike in South Canterbury.

"I just caught the left-hand corner of [the car]. I obviously tried to avoid it.

"But whether it was because I didn't have my leg to manoeuvre like you can on a bike, I don't know. I can blame lots of things now."