ISIL given '48 hours' to evacuate area south of Damascus

ISIL fighters have been in control of an area south of Damascus for nearly three years. 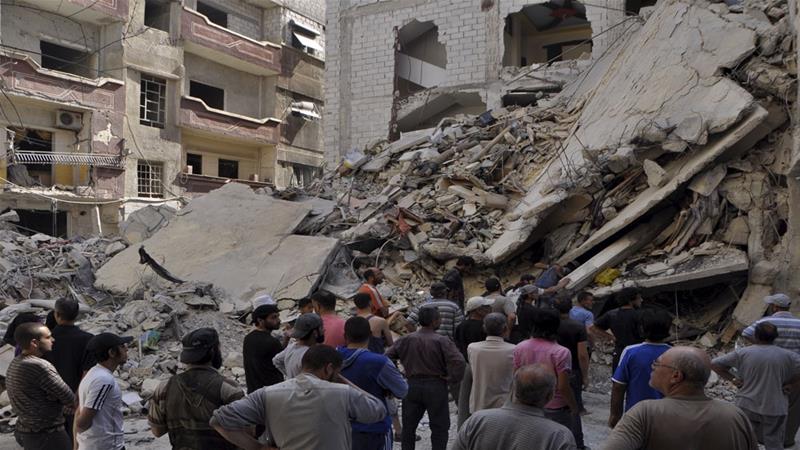 The Syrian military has given ISIL fighters 48 hours to leave a pocket they control in the capital’s south, a pro-government local newspaper reported on Thursday.

Syrian forces have for days been launching air attacks on the area controlled by the Islamic State of Iraq and the Levant (ISIL, also known as ISIS) in the south of Damascus, primarily around the Palestinian Yarmouk refugee camp and its surrounding neighbourhoods, Al-Watan daily said.

“The two-day window is an attempt to avoid a military assault. If they refuse to leave, the army is ready to launch a military operation to end their presence in the area,” the newspaper added.

Yarmouk, about 8km from central Damascus, was home to Syria’s largest Palestinian refugee community before the Syrian war began more than seven years ago.

Although most of the camp’s residents fled to other parts of Syria or to neighbouring countries, the United Nations estimates thousands remain trapped inside.

Since 2015, the Syrian government has regained control of the majority of Syria, with opposition groups now restricted to the northern part of the country.

Though other pockets controlled by ISIL group fighters still exist, the armed group were driven out of their last major stronghold in Syria in October last year, when the Syrian Democratic Forces (SDF), an alliance of Kurdish and Arab forces backed by the United States, launched a four-month long offensive to push them out of Raqqa.