Italian government set to declare state of emergency in Venice

Rome: Italy's government is set to declare a state of emergency in flood-ravaged Venice to swiftly secure the historic city funds to repair damage from the highest tide in 50 years.

Prime Minister Giuseppe Conte described the flooding as "a blow to the heart of our country". 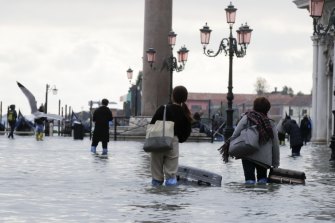 He said a cabinet meeting called for Thursday afternoon will declare a state of emergency and approve the first measures aimed at helping the city's recovery.

Conte spent Wednesday night in Venice, where world-famous monuments, homes and businesses were hit hard by the exceptional flooding.

Venice's mayor said the damage is estimated at "hundreds of millions of euros."

Earlier in the week, the worst flooding in Venice in more than 50 years prompted calls to better protect the historic city from rising sea levels as officials calculated hundreds of millions of euros in damage.

The water reached 1.87 metres above average sea level on Tuesday, the second-highest level ever recorded in the city and just seven centimetres lower than the historic 1966 flood. Another wave of exceptionally high water followed on Wednesday.

"Venice is on its knees," Mayor Luigi Brugnaro said on Twitter. "St. Mark's Basilica has sustained serious damage, like the entire city and its islands."

One death was blamed on the flooding, on the barrier island of Pellestrina. A man in his 70s was apparently electrocuted when he tried to start a pump in his dwelling, said Danny Carrella, an official on the island of 3,500 inhabitants. 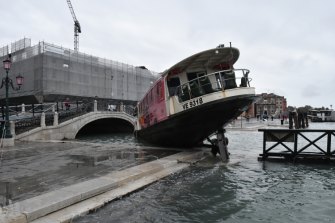 A stranded ferry in flood-hit Venice.Credit:AP

The flooding was caused by southerly winds that pushed a high tide, exacerbated by a full moon, into the city.

Rising sea levels because of climate change coupled with Venice's well-documented sinking make the city built amid a system of canals particularly vulnerable. The sea level in Venice is 10 centimetres higher than it was 50 years ago, according to the city's tide office.

Brugnaro blamed climate change for the "dramatic situation" and called for a speedy completion of a long-delayed project to construct offshore barriers.

Called "Moses," the moveable undersea barriers are meant to limit flooding. But the project, which has been opposed by environmentalists concerned about damaging the delicate lagoon ecosystem, has been delayed by cost overruns and corruption scandals, with no launch date in site.

Luca Zaia, governor of the Veneto region, told SkyTG24 that the barriers were almost complete, but it wasn't clear if they would work against such flooding.