Lesson from an ancient town: Dark ages pass, but knowledge is forever 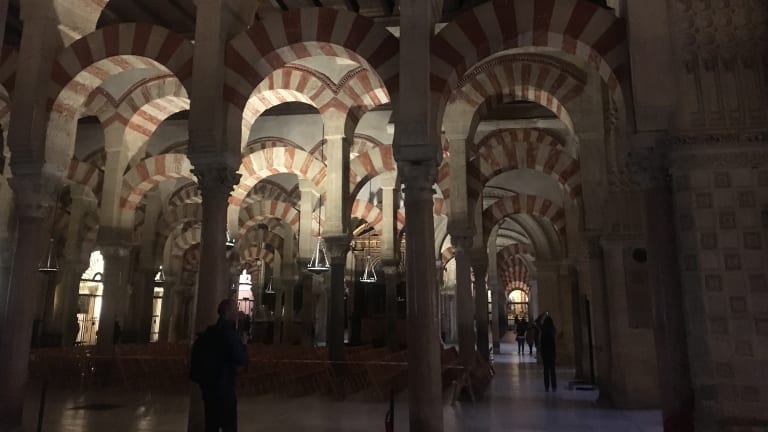 The Cathedral-Mosque of Cordoba, Spain.

The damnedest things come to mind when you’re travelling.

As I wandered the tangled alleys of the ancient city of Cordoba in southern Spain a few weeks ago, an intriguing puzzle presented itself.

We are drowning in knowledge these days; all of it no more than a Google click away.

But where might we be if the Islamic world that once illuminated Cordoba had not expended centuries of intellectual energy to help rescue, preserve and enhance the foundation of modern thought?

A thousand years later, would we have the tools to even imagine a Google?

And now, the great paradox. Armed with access to immeasurable knowledge of our world and the universe … a lot of us struggle to know what to believe.

Russia’s increasingly sophisticated cyber-war factories spit malevolent propaganda across the ether, where it is picked up on Facebook and passed on by the gullible.

The President of the United States, who seems barely to have read a book, communicates preposterous lies and sly distortions through Twitter, and a significant proportion of his nation hails him. 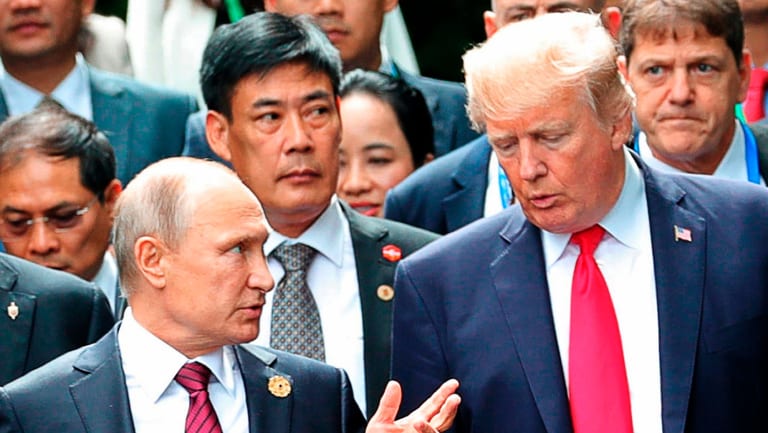 Masters of misinformation: US President Donald Trump, right, and his Russian counterpart Vladimir Putin at the APEC summit in Vietnam in November.

Truth-seeking to many has become burdensome, optional or even redundant.

But hang on. The Islamic world gave us modernity?

Stay with us in the courtyard of the dreaming mosque of Cordoba for a bit while we whirl through history.

Just about everyone recognises the ancient Greeks developed what we in the West consider to be the basis of knowledge: philosophy, mathematics, medicine, astronomy, science, architecture, literature and politics.

But most of the Greek empire was subsumed by Rome – which took the most important ideas and made them its own.

And then the Western Roman Empire fell.

Rome was reduced to a few thousand broken citizens shuffling within the shadows of the monuments of the past, much of Europe’s urban life fractured and scattered and Huns, Goths, Vandals, Vikings, Bulgars and Franks roamed in search of territory. 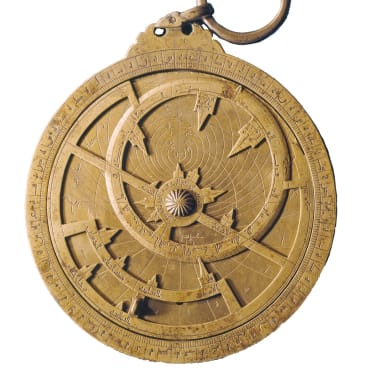 This astrolabe was created for Jaafar, son of the Abbasid caliph al-Muktafi, in Baghdad in the 10th century AD.

This, of course, is a limited and cinematic retelling of the early Middle Ages, which spanned the period from AD 500 to 1000.

But what is indisputable is there was scarce space in that era, dubbed the Dark Ages, for philosophy or mathematics to flourish, let alone literature or democracy. The teachings of Plato, Socrates, Aristotle and the other great thinkers and scientists of Greece fell into obscurity west of Constantinople and north of Morocco.

In Baghdad, however – the now war-shattered capital of Iraq, then the seat of the Abbasid caliphate – there rose a remarkable institution known as the House of Wisdom.

With Europe into its so-called Dark Ages, the Islamic world was entering its Golden Age.

The House of Wisdom, between the 8th and 13th centuries, attracted Muslim, Christian and Jewish scholars from throughout the known world to study and translate the tracts that had underpinned modern thought to that time into Arabic.

Every important and available book and paper known to exist was collected for translation from Greek, Latin, Persian, Indian and even Chinese sources.

By the 9th century, the House of Wisdom contained the world’s largest library, and up to 500  scholars worked feverishly on their own discoveries.

The idea that the Earth was round, its circumference measurable, was no stranger here. Physicians investigated the causes of infection. The number zero, invented as a useful concept in India, reached Baghdad somewhere around AD 770 and became a crucial element in mathematics. Without zero there would never have been a computer, let alone Google.

The pleasure of harnessing knowledge spread rapidly across Arab North Africa, through refined cities like Fez, and beyond.

Meanwhile, in AD 711, those Muslims known in the West as Moors began pouring across the Strait of Gibraltar and took over the Iberian Peninsula. By AD 1000, most of what we now know as Spain was occupied by the Islamic Caliphate of Cordoba. 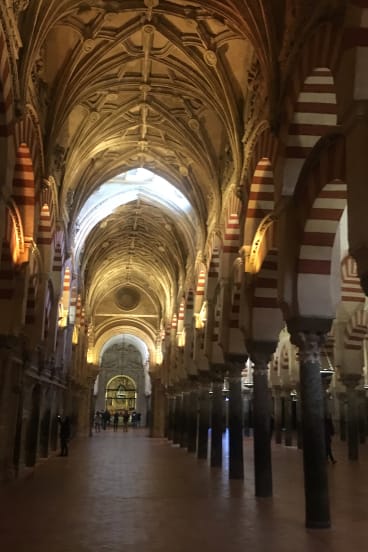 Eventually the Spaniards conquered Cordoba and plonked a cathedral in the heart of its main mosque.

With the city of Cordoba at its centre, here rose the most enlightened and cultured area of Europe.

Cordoba, with its magnificent Mezquita (mosque) spreading over 2½ serene hectares, was a world centre of learning. Its main library, one of more than 70 in the city of half a million inhabitants, was said to contain 400,000 books. Christians and Jews were permitted to live in relative peace alongside the Moors, contributing to the cultural vibrancy of Andalusia.

Empires, however, fracture, rot from the inside, collapse and are conquered. By 1150, Islamic Spain was dying, though it wasn’t until 1492 – the year, in a marvellous stroke of symmetry, that saw Christopher Columbus sail from the Andalusian port of Palos on his first voyage of discovery – that the last of the Moors were exiled back to Africa.

The first large Islamic city to fall was Toledo, packed with libraries of those Golden Age works translated into Arabic.

Suddenly in possession of this vast trove of scholarship, almost all of it in Arabic, the Spanish established what became known as the Toledo School of Translators.

The Arabic texts, containing the world’s preserved store of knowledge, were painstakingly translated for Spanish rulers by learned Jews and Christians throughout the 12th and 13th centuries, first into Latin and later into Castilian – the basis of modern Spanish.

And to cut a very long story very short, that’s part of how Plato and his fellow philosophers, and the sciences of mathematics and astronomy and medicine, made their way back to Western Europe, helping fire the glory of the Renaissance … and on and on. 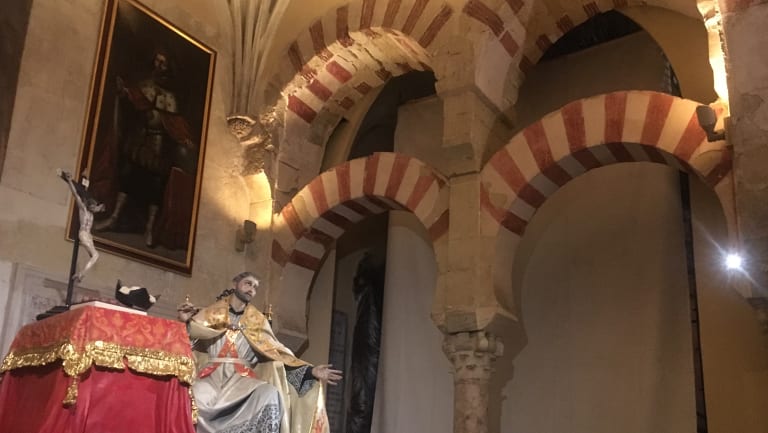 Christian scholars translated Islamic scholarship from Arabic back into Latin and Castilian, rediscovering their own civilisation in the process.

It seemed, in the courtyard of the Cordoba Mosque – in the centre of which the triumphant Spanish rudely plonked a cathedral – to have been a lot of effort, only to lead eventually to modern barbarians like Donald Trump and Vladimir Putin doing their best to corrupt knowledge just as we enter the age of the most powerful library ever known, the internet.

Still, here’s the damnedest and most hopeful thought that came to mind: places like Cordoba remind us that empires rot and die, but the thirst for knowledge evolves and never ends.