Let the light in: Jewish children celebrate Hanukkah in the park

It has been a year in which COVID-19 darkened our world, but there was plenty of light on a sunny day out at Princes Park in Caulfield South on Sunday.

Jewish children who attend government schools forgot about homework for an afternoon to mark the festival of Hanukkah. 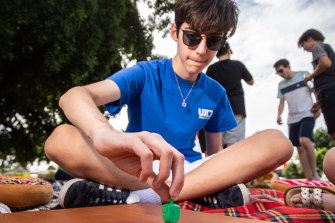 The wider Jewish community’s annual Chanukah in the Park, held at Caulfield Park for thousands of people, was called off this year due to COVID-19 restrictions.

But the United Jewish Education Board, a community organisation that provides education and cultural services and social events for Jewish children who attend state schools, was among smaller groups marking the festival in Princes Park.

The order of proceedings was playing traditional games, designing T-shirts and eating doughnuts. The doughnuts have a symbolic meaning: foods made with oil recall how a small group of Jewish people saved their temple from being destroyed by their enemies at the time of the Maccabean Revolt against the Seleucid Empire in about 160BC. They lit a lamp to rededicate the temple to God. Though they had only enough oil for one day, the light miraculously lasted for eight. 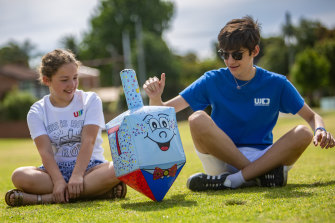 Today at Hanukkah, every night for eight nights, one candle is added to ceremonial menorahs, or candelabras, some in public places such as Federation Square.

United Jewish Education Board teen engagement co-ordinator Hannah Schauder said many children in Caulfield South were reconnecting with each other and their Jewish community for the first time, with activities having been run online since March.

"This is the first in-person event, which is great. It’s very exciting," she said.

At one event station they rolled a dreidel – a four sided spinning top, each side with a different Hebrew letter on – in a game traditionally played at Hanukkah. It is played as a kind of roulette, but in this case with chocolate coins, not money.

Leah Hain, a United Jewish Education Board leader, said dreidels were originally used to teach Jewish children about the Torah, or bible, under the noses of non-Jewish rulers.

At another station they customised Hanukkah T-shirts and at another, labelled the "schmooze station", they ate latkes (potato cakes fried in oil) and doughnuts from nearby Glick’s bakery, learnt about the Hanukkah story and listened to traditional music.

Ms Schauder said it was a fitting time to celebrate Hanukkah, also known as the Festival of Light.

"The big overall message of Hanukkah is that even the smallest bit of light can banish the darkness," she said. "I think it’s a really nice way to end the year, that we’re coming out of a dark period for the community."

David Loven, 15, of Caulfield, said the United Jewish Education Board was "like a big family" and it was exciting "to come together as a community to celebrate a piece of our history, to socialise and eat food". The Glen Eira College year 9 student said that during the pandemic "everything had to become virtual", but it was "not the same as socialising in person".

Deanne Khmelevski, of Bentleigh East, said she took her 12-year-old son Stanley to the gathering "to be outside and meet other Jewish kids and experience the culture".

She said Hanukkah was popular with children. Stanley got money – Hanukkah gelt – from his grandfather and gifts (a computer games controller and bubble bath) from her. At sunset they would light the menorah at home.