Ministers ‘row over who will fund Channel migrant navy patrol’

The Channel migrant crisis descended deeper into farce today amid claims Sajid Javid and Gavin Williamson are rowing about who will pay for navy patrols.

In a major escalation of the government response, a Royal Naval vessel is due to start patrolling the Straits of Dover.

The deployment is another U-turn for the Home Secretary, who ignored an offer of military assistance at the weekend but last night changed his mind and wrote to Mr Williamson requesting support.

However, the pair still appear to be wrangling over who will foot the £20,000 a day cost of deploying HMS Mersey on patrol.

Mr Javid, touted by some as a possible future Tory leader, has faced days of criticism over what has been seen as a botched response to the crisis.

Two Border Force cutters – HMC Valiant and HMC Protector – due to return from the Mediterranean to join patrols are still in Greece, according to the Marine Traffic ship tracker online. 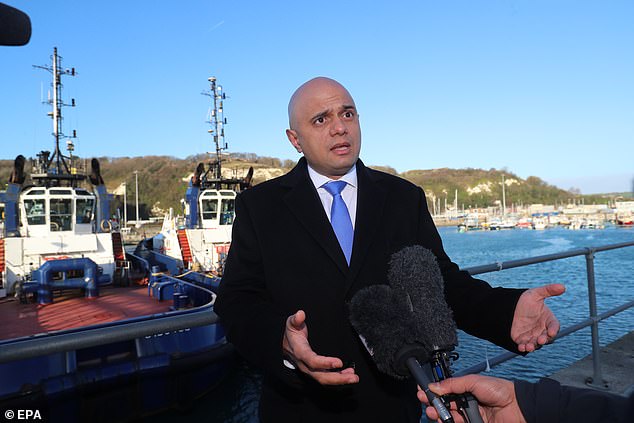 At least 139 migrants were caught crossing from France to Britain over Christmas, and 239 have reached the UK since November.

The Home Secretary was ridiculed after he classified the crisis as a ‘major incident’ on Friday while remaining on a family safari holiday 6,000 miles away in South Africa.

When he returned to Whitehall on Monday, he ordered the return of two Border Force cutters from the Mediterranean but resisted the offer of military assistance from Mr Williamson, who is seen as a potential leadership rival.

HMS Mersey, a naval patrol vessel, is expected to take up duties off the Kent coast today.

It will provide cover while the Border Force patrol boats return from the Mediterranean, which could take as long as a fortnight.

Royal Navy sailors will also be sent to help man the civilian vessels when they eventually get back so they can operate around the clock.

The RAF will provide aerial surveillance to track boats trying to make the crossing, although it is not yet clear what form this could take.

Home Office and MoD sources tried to play down the apparent spat about who will foot the bill for the military operation. Discussions are said to be ‘continuing’, but one official said: ‘It is a process.’ 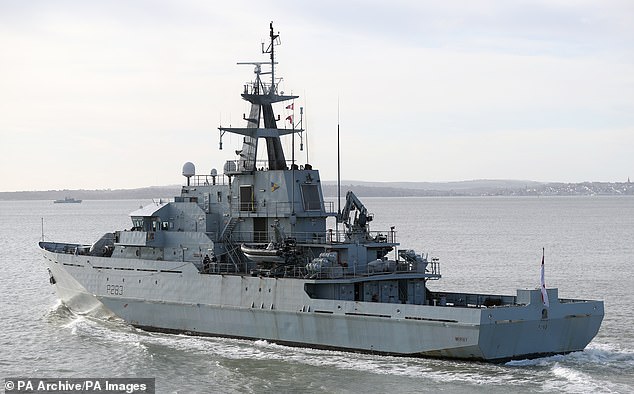 HMS Mersey (pictured), a naval patrol vessel, will set off from Portsmouth this morning to be stationed off the Kent coast 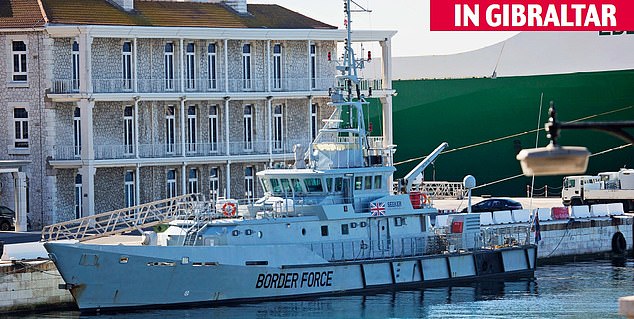 Mr Javid used a visit to Dover yesterday to vow tough action on the cross-Channel migrants. He questioned whether many attempting the crossing were ‘genuine’ asylum seekers and suggested they should try to claim refuge in France instead.

The Home Secretary’s decision to finally call in the Navy and RAF may be seen by some as an attempt to burnish his Tory leadership credentials.

But by only moving yesterday, he may also risk accusations that he is acting too late. There have been no known migrant arrivals on Britain’s shores since New Year’s Eve, although this is thought to be partly because of poor sea conditions deterring further attempts.

Meanwhile, the two civilian ships that are supposed to be coming back from the Mediterranean were still sitting in their ports last night – more than 48 hours after Mr Javid ordered their return.

HMC Seeker was photographed yesterday moored inside a Gibraltar harbour with no obvious signs of its crew preparing it for departure. 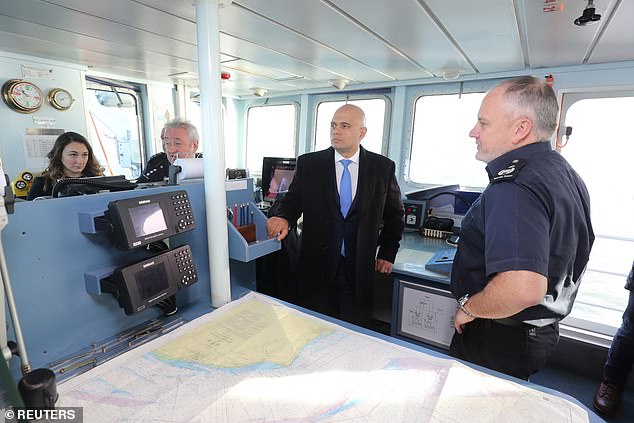 As well as deploying cutters, the Home Secretary has promised that ‘covert’ action would be taken on the other side of the Channel

Both ships have been taking part in Operation Frontex, which is tackling the migration flows from North Africa and the Middle East to Italy, Greece and Spain.

Only one of the five Border Force cutters – specialist boats which are capable of rescuing several migrant boats at the same time – has been working in the Straits of Dover.

Charlie Elphicke, the Tory MP for Dover, last night expressed his concern over the delays in the return of the ships.

He said: ‘I’ve been making the case for the Border Force vessels to come back from the Mediterranean to take back control of our borders.

‘It’s important to know when they will be arriving back in British waters and I hope that the Home Office will clarify the position as soon as possible. 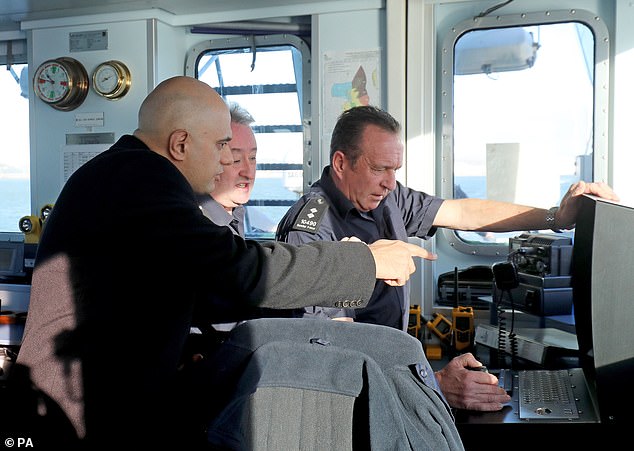 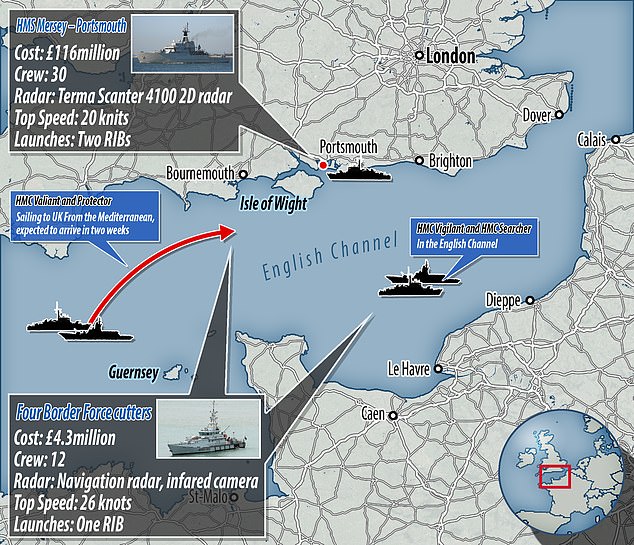 ‘It’s difficult to understand why they might still be Mediterranean ports and hopefully they will be come back to British waters as soon as possible.’

As well as deploying cutters, the Home Secretary has promised that ‘covert’ action would be taken on the other side of the Channel to disrupt smuggling rings as part of improved cooperation with French authorities.

Any migrant picked up in English waters will, at least initially, be brought to the UK to have their asylum claim heard.

Under international maritime law, the Channel is divided in half for search and rescue operations.

The cutters, which each have a crew of around 16, are capable of reaching speeds of about 26 knots.

However their respective journeys to the Channel from the Mediterranean are likely to be slowed by poor weather in the Atlantic.

It could take them more than two weeks to start patrolling the Straits of Dover, where at least 139 migrants have been caught crossing over Christmas.

HMC Seeker was photographed yesterday moored in a Gibraltar harbour with no obvious signs of departure preparations, while HMC Protector remained moored in Mytilini harbour on the Greek island of Lesbos last night, according to the ship’s locator beacon.

Both ships are part of Operation Triton, which is tackling the migration flows from North Africa and the Middle East to Italy, Greece and Spain.

In a humiliating U-turn on the migrant crisis, Mr Javid announced on Monday that the cutters would be returning. He said that around 230 migrants tried to cross the Channel in December, although just under half were ‘disrupted’ by the French and never left their waters.

The Home Office refused to say when the ships would reach the English Channel, for ‘operational reasons’.

Only one of the five cutters – specialist boats which are capable of rescuing several migrant boats at the same time – has been working in the Straits of Dover.

As well as deploying cutters, the Home Secretary has promised that ‘covert’ action would be taken on the other side of the Channel to disrupt smuggling rings as part of improved cooperation with French authorities.

Charlie Elphicke, the Tory MP for Dover and Deal, said: ‘It’s difficult to understand why they might still be in Mediterranean ports and hopefully they will come back to British waters as soon as possible.’