Monkeys kill family of five by collapsing a wall in India

Monkeys kill family of five: Woman and her four children are crushed to death under a wall which collapsed after a troop of rampaging primates ‘violently shook it’ in India

A mother and four of her children were crushed to death at their home in India after a wall was brought down by a troop of monkeys.

The five victims were killed by falling masonry after the wall was ‘violently shaken’ by monkeys while the family slept in the courtyard, the Times of India reports.

The family was sleeping outside because their indoor ceiling fan was not working amid scorching weather in Shahjahanpur, Uttar Pradesh.

Two other children survived in what authorities called a ‘tragic incident’ as they offered to pay compensation to the family. 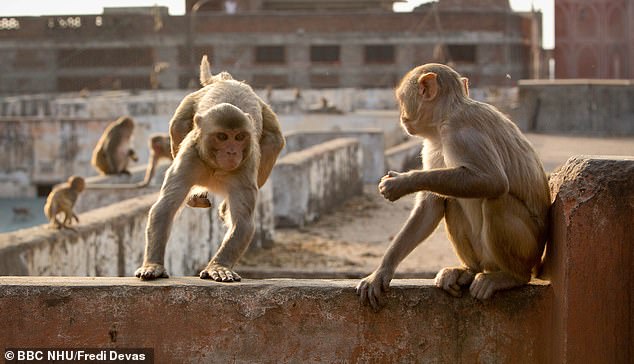 District magistrate Vikram Singh met the survivors and said they were getting the ‘best possible treatment’.

‘It was a tragic incident and five members of the family died immediately after the wall collapsed on them,’ he announced after inspecting the scene.

The chief minister of Uttar Pradesh, India’s most populous state, has offered the family 400,000 rupees (£4,200) in compensation, the magistrate said.

Friday’s freak accident was the latest in a long line of monkey-related tragedies in India, which is thought to be home to around 50million of the primates.

Last August, a 50-year-old man died in Sambhal after falling from a terrace at his home when he was attacked by a troop of monkeys.

Reports at the time said it was the sixth monkey-related death in Sambhal during 2019 alone.

In June last year, a one-and-a-half-month-old infant was killed by a monkey which apparently jumped into her cot to steal her milk bottle.

Red-faced rhesus macaques have also been known to spread havoc in Delhi, snatching food and phones and even breaking into homes.

More recently, authorities said a troop of monkeys had attacked a medical official and snatched away blood samples of coronavirus patients in Meerut.

People living near the medical college feared a further spread of the virus if the monkeys carried the samples into residential areas.

However, there is no evidence so far that monkeys can be infected with the coronavirus.

Environmentalists say the destruction of monkeys’ natural habitats is the main reason the animals move into urban areas in search of food.