Earlier Miss Begum sobbed with gratitude as she thanked Italian doctors for ‘believing’ in her stricken daughter’s recovery.

Tafida, who was sent into a coma when a blood vessel burst in her brain in February, was airlifted to Italy on Tuesday night. NHS doctors had pronounced she had no hope of recovery and asked the High Court to sanction letting her die.

But two weeks ago, in a legal victory that stunned the medical profession, a judge sided with the family – citing ‘the sanctity of life’ – and allowed them to transfer her to the Gaslini hospital in Genoa. Italian doctors told the family that Tafida could be back home in Newham, east London, ‘in a year’. 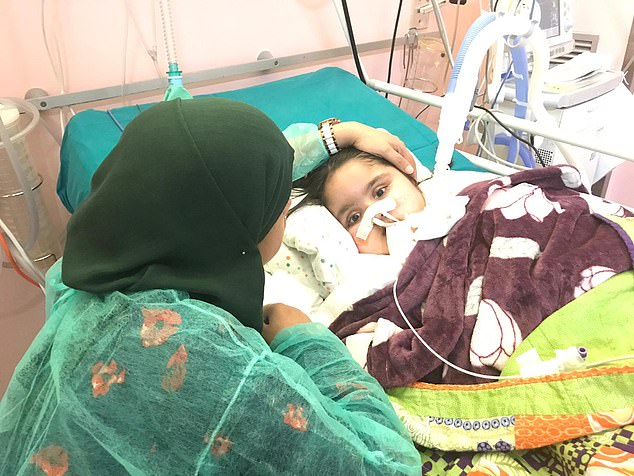 Shelina Begum kept a beside vigil after brain-damaged Tafida, five, started new treatment in Italy after she was airlifted there on Tuesday night

Miss Begum said they are now no longer living with the suffocating fear that NHS doctors would switch off her life support. Locals in Genoa gave the family an extraordinary welcome after the case made Italy’s national news.

Following Tafida’s flight from Britain in a medically-equipped jet, a traffic policewoman stopped her ambulance at the gates of the hospital to hand over a rose. Miss Begum and her husband Mohammed Raqeeb stood shoulder to shoulder with Italian medics at an emotional press conference held at the hospital to welcome them. 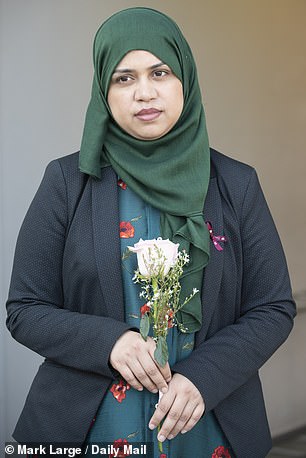 Miss Begum said: ‘We want to thank the Gaslini for believing in our daughter’s recovery and thank the Italian public for the love and warm support they have shown us. The doctors in the UK believed from day one that Tafida wasn’t going to make it.

Miss Begum, whose 40th birthday is today, said: ‘A huge weight has been lifted from our shoulders. We had this constant fear in the UK that they were going to withdraw treatment.

‘That is not going to happen here. It just doesn’t exist here. That’s the major difference.

‘We saw her this morning, and she was stable, awake and turning her head from side to side. I have assured her that mummy and daddy are here. We are looking forward to her improving every day.’

Solicitor Miss Begum’s voice cracked and she wiped away a tear as she told the Italian media: ‘Tafida was a very happy child. She wasn’t born unwell. This thing just suddenly happened. I’m hoping, with time, she’ll come to some sort of recovery – and that’s the day we are waiting for.’ Outside in the 20C sunshine, her construction consultant husband, 45, beamed and added: ‘The sunshine tells a story. It’s up to Tafida now.’

Paolo Petralia, director of the hospital – Italy’s equivalent of Great Ormond Street, said: ‘When Tafida’s mother wrote to us in June we decided to help, and I put together a working group of doctors with different specialities who have studied her case.

‘We have found a house for the family to live in nearby. Everyone in the hospital – and the people in the town as well, and the police – has been asking what they can do to help. 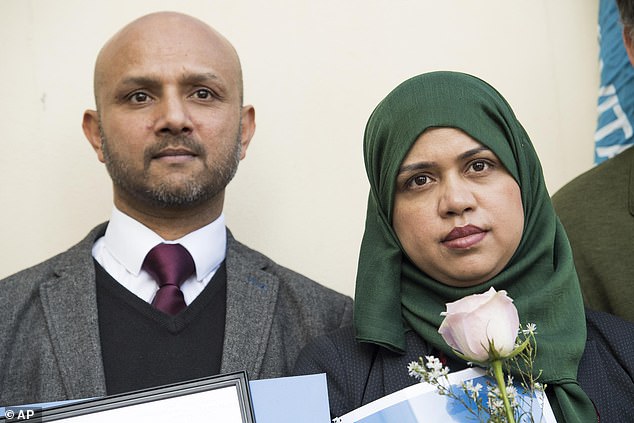 ‘When she arrived at the hospital a traffic policewoman on the gate gave me a rose to give Tafida.’

Dr Andrea Moscatelli, head of the neurological department, said Tafida would undergo a tracheostomy operation, saying: ‘The idea is to make life more comfortable for her – take out the tubes from her mouth and let her breathe through a tube to her throat, and be fed through a tube to her stomach. We will give her time to get better. The objective is to transition her from intensive care to home care.

‘We will teach the parents how to care for her at home. We have spoken to them very openly. Our assessment is exactly the same as the doctors in the UK, so we are not giving them false hope. But what we can give them is time. 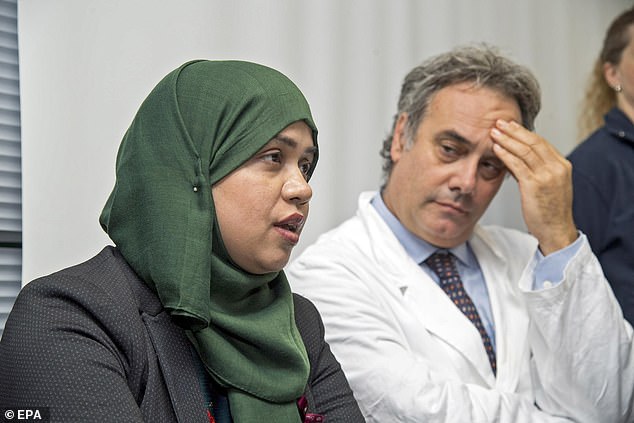 Solicitor Miss Begum’s voice cracked and she wiped away a tear as she told the Italian media: ‘Tafida was a very happy child. She wasn’t born unwell. This thing just suddenly happened’

‘After such a brain injury, nobody can say in just six months what is her potential for recovery. In the medical literature, you wait one year to see.’ Tafida’s family are funding her stay with public and private donations. They have applied for her to become an Italian citizen, which would reduce their bills.

Their local lawyer, Filippo Martini, said: ‘After [the similar cases of] Charlie Gard and Alfie Evans, for the first time it has been decided that the best interests of a sick child allows them to be treated in a European hospital.’

He said Alfie’s father, Tom, was planning to visit Tafida in Italy.

Tafida had a seven-hour operation after the blood vessel burst in her brain. She was given a one per cent chance of survival before falling into a coma. She was then given 24 hours to live but opened her eyes after two weeks.