Goyang, South Korea: North Korea's state media on Saturday trumpeted leader Kim Jong-un's "immortal achievement" a day after he met South Korean President Moon Jae-in and repeated past vows to remove nuclear weapons from the peninsula and work toward a formal end to the Korean War.

Despite the bold declarations, the leaders failed to provide any new measures on a nuclear standoff that has captivated and terrified millions, and analysts expressed doubts on whether the summit represented a real breakthrough.

The North's official Korean Central News Agency, in typically fawning language, reported that the leaders exchanged "honest and heartfelt talks" at a summit that "was a realisation of the supreme leader's blazing love for the nation and unyielding will for self-reliance." 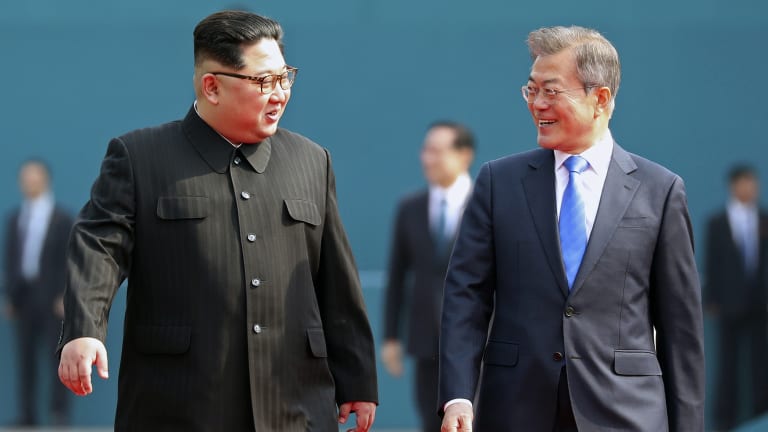 The state propaganda arm said Kim's "immortal achievement will be brightly engraved in the history of the Korean nation's unification."

Even if the substance on nuclear matters was light, the images Friday at Panmunjom were striking: Kim and Moon set aside a year that saw them seemingly on the verge of war, grasped hands and strode together across the cracked concrete slab that marks the Koreas' border.

The sight, inconceivable just months ago, allowed the leaders to step forward toward the possibility of a cooperative future even as they acknowledged a fraught past and the widespread skepticism that, after decades of failed diplomacy, things will be any different this time.

On the nuclear issue, the leaders merely repeated a previous vow to rid their peninsula of nuclear weapons, saying they will achieve a "nuclear-free Korean Peninsula through complete denuclearization." This kicks one of the world's most pressing issues down the road to a much-anticipated summit between Kim and President Donald Trump in coming weeks.

"There is no reference to verification, timetables, or an attempt to define the word 'complete.' It does not reiterate or advance Pyongyang's unilateral offer to halt nuclear and ICBM tests," said Adam Mount, a senior defence analyst at the Federation of American Scientists. "In practice, this statement should enable a US-North Korea summit to detail specifics about what, when, and how denuclearisation would occur, but it has not offered a head start on that process. All of the negotiation is left to a US team that is understaffed and has little time to prepare."