More than 50 Labour MPs demanded their leader call a vote of no confidence in Theresa May tonight in defiance of his decision to wait.

Jeremy Corbyn has insisted Mrs May should call and lose the vote on her Brexit deal before trying to collapse the Government – believing making the move too early could rally the Tories at their most divided.

But scores of Labour MPs disagree and went public with a revolt tonight, led by Ian Murray.

The move comes after Scottish First Minister Nicola Sturgeon issued a public appeal to Mr Corbyn to get on with calling a confidence vote in the Commons.

Critics of the Prime Minister believe her Government is on the brink of collapse because it cannot pass a Brexit deal and think Mr Corbyn could push it over the edge. 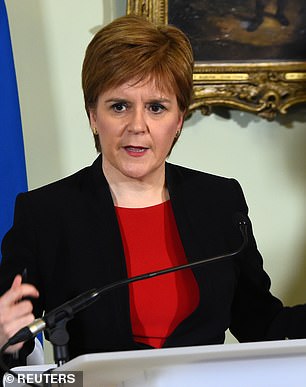 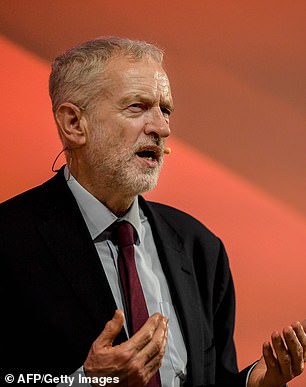 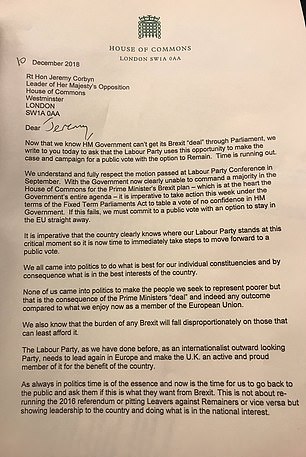 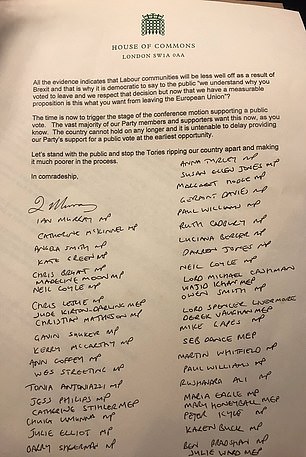 But scores of Labour MPs disagree and went public with a revolt tonight, led by Ian Murray writing a letter to Jeremy Corbyn (pictured)

The Labour MPs’ letter, drafted by Mr Murray, said: ‘With the Government now clearly unable to command a majority in the House of Commons for the Prime Minister’s Brexit plan – which is at the heart of the Government’s entire agenda – it is imperative to take action this week under the terms of the Fixed Term Parliaments Act to table a vote of no confidence in HM Government.

‘If this fails we must commit to a public vote with an option to stay in the EU straight away.’

Most of the Labour MPs involved support a new referendum on the EU. Labour policy is only to switch to this if it cannot secure a new election – a hope that would fade if Mrs May won a confidence vote in the Commons.

Ms Sturgeon said: ‘So it is confirmed – pathetic cowardice it is from PM. Yet again the interests of the Tory party are a higher priority for her than anything else. This can’t go on.’

In a direct Twitter appeal to Labour, she added: ‘So Jeremy Corbyn – if Labour, as official opposition, lodges motion of no confidence in this incompetent government tomorrow, will support & we can then work together to give people the chance to stop Brexit in another vote.

The European Court of Justice decided that Article 50 can be withdrawn by the UK without permission from other member states.

Britain would keep its current terms of membership if it quit the process – meaning keeping the rebate, the opt out from the Euro and exemptions from the Schengen passport-free zone.

Today’s ruling will encourage hopes from pro-EU MPs that a second referendum can be held to stop the UK from leaving the bloc altogether.

But Foreign Secretary Jeremy Hunt said the ruling was ‘irrelevant’ as it was ‘certainly not the intention of the government’ to delay Brexit.

The case was brought by a cross-party group of Scottish politicians together with lawyer Jolyon Maugham QC, director of the Good Law Project.

A Labour spokesman said the party would only move a motion of no confidence when it thought it would be a success.

The spokesman said: ‘It is clear to us that Theresa May will not renegotiate the deal when she goes to Brussels, and will only be asking for reassurances from EU leaders.

‘When she brings the same deal back to the House of Commons without significant changes, others across the House will be faced with that reality.

‘At that point, she will have decisively and unquestionably lost the confidence of Parliament on the most important issue facing the country, and Parliament will be more likely to bring about the general election our country needs to end this damaging deadlock.’

Mr Corbyn is facing a growing clamour to table the no confidence vote, with Labour backbencher Ben Bradshaw urging him to ‘show leadership’ in this ‘time of crisis’.

But the Labour leadership are reluctant to call the vote – fearing it could backfire and rally Tory rebels to support the PM just when her premiership hangs by a thread.

It comes on a day of high political drama in Westminster after Mrs May dramatically U-turned and decided to pull the vote on her deal.

A staggering 110 Tory MPs had indicated they would refuse to back her deal – setting her on course to suffer one of the biggest parliamentary defeats ever.

Staring down the barrel of this overwhelming defeat, Mrs May has finally caved to the pleas from her MPs and Cabinet ministers to delay the vote.

She is set go to Brussels for the EU summit on Thursday where she will plead with leaders for ore concessions to help her sell her deal back home.

The PM is under huge pressure to scrap or make major changes to the hated Irish backstop, to ensure Britain can pull out of it without needing the permission of the EU.

In a chaotic morning in Westminster, a series of Cabinet ministers and a spokeswoman for the PM all publicly insisted this morning that the vote was ‘going ahead as planned’.

But within an hour, three senior sources told MailOnline they are certain that the Commons showdown will be put off. The Pound slid sharply on the news.

The decision – expected to be formally confirmed shortly – drew derision from critics, including Tories. 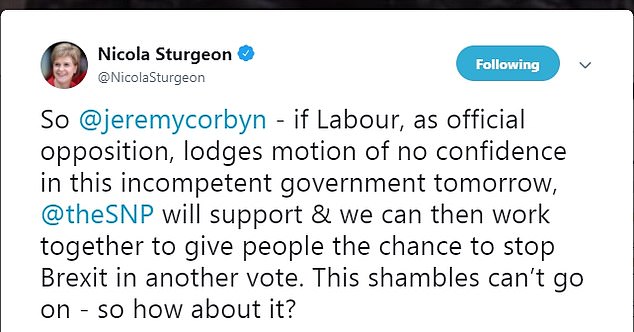 The SNP leader said that now is the time for opposition parties to rise up and work together to try to force the PM out of office, and trigger another referendum

Mr Corbyn said: ‘The Government has decided Theresa May’s Brexit deal is so disastrous that it has taken the desperate step of delaying its own vote at the eleventh hour.’

He added: ‘We have known for at least two weeks that Theresa May’s worst of all worlds deal was going to be rejected by Parliament because it is damaging for Britain.

‘Instead, she ploughed ahead when she should have gone back to Brussels to renegotiate or called an election so the public could elect a new government that could do so.

‘We don’t have a functioning government. While Theresa May continues to botch Brexit, our public services are at breaking point and our communities suffer from dire under-investment.

‘Labour’s alternative plan for a jobs first deal must take centre stage in any future talks with Brussels.’ 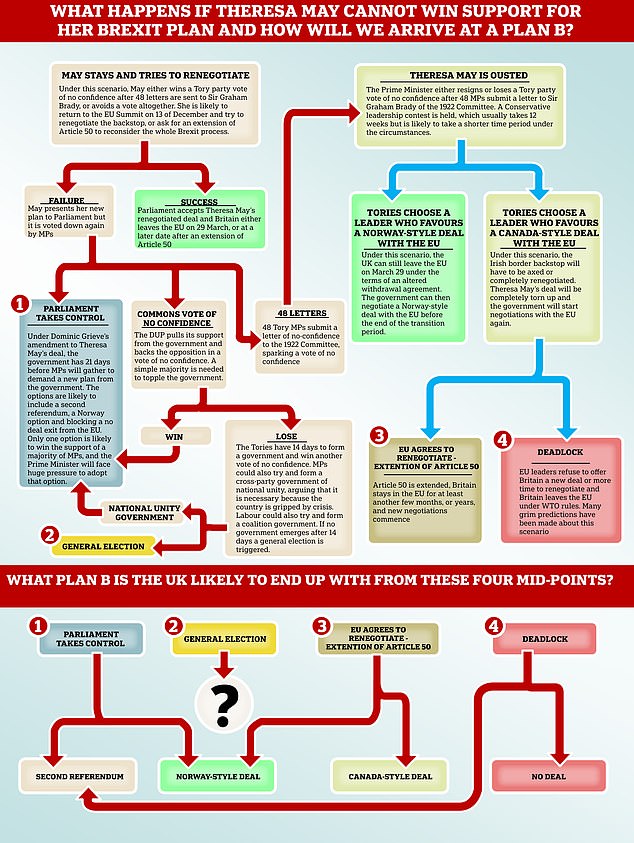