Kim Jong-un intends to get rid of ALL of his nuclear weapons, materials and facilities to achieve complete denuclearisation, South Korea’s president says

North Korean dictator Kim Jong-un will to get rid of all the rogue state’s nuclear weapons, according to an agreement at a summit today.

The hermit kingdom will abolish all nuclear materials and facilities to achieve ‘complete’ denuclearisation, South Korean President Moon Jae-in has claimed after a meeting earlier today.

Kim and US President Donald Trump pledged to work towards denuclearisation at their landmark June summit in Singapore, but the agreement was short on specific details.

Negotiations have made little headway since, with the North refusing to declare its nuclear weapons and facilities or agree to a concrete timeline. 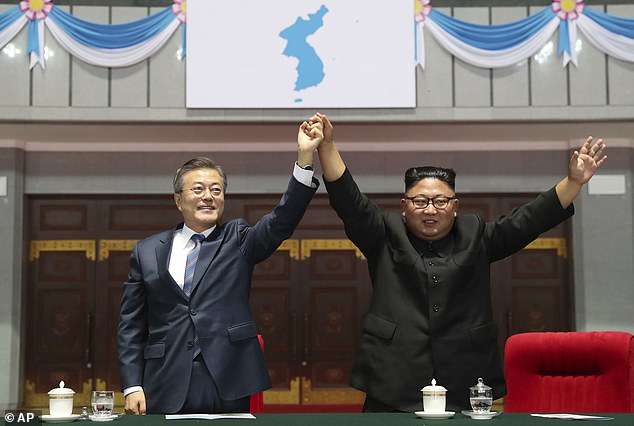 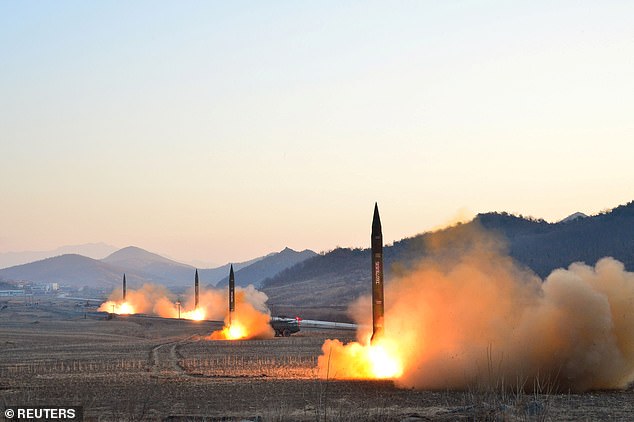 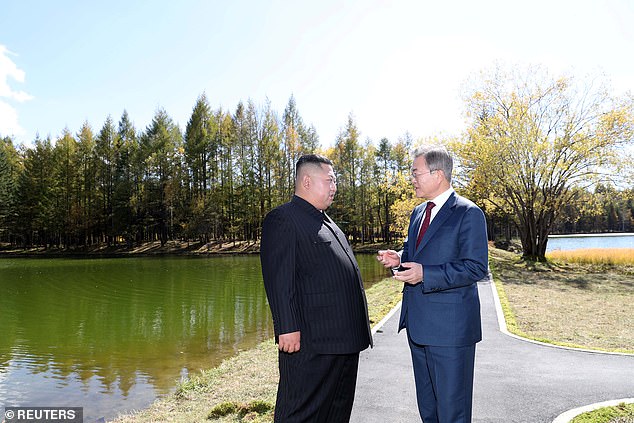 Moon emphasised Kim’s resolve to abandon nuclear and missile programmes, that the North pursued in defiance of UN Security Council resolutions, and focus on the economy if regime security is guaranteed.

After his third summit in Pyongyang, Moon said the North was ready to invite international experts to watch the dismantling of a key missile site and would close the main Yongbyon nuclear complex if Washington took reciprocal actions.

North Korea could have as many as 60 nuclear weapons, the South said after a summit earlier this month.

According to South Korean government reports, North is believed to have produced 110 lbs of weaponised plutonium – enough for at least eight bombs.

The actions could include putting a formal end to the 1950 to 53 Korean War, opening of a US liaison office in North Korea, humanitarian aid and an exchange of economic experts, Moon said. 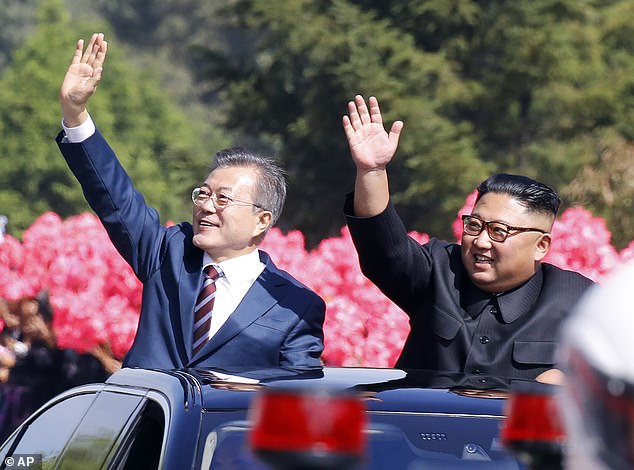 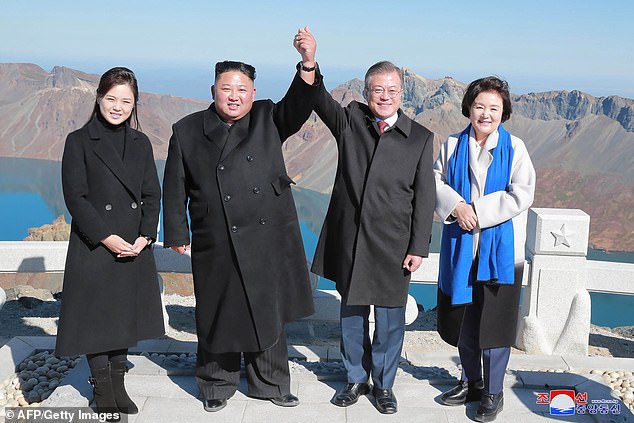 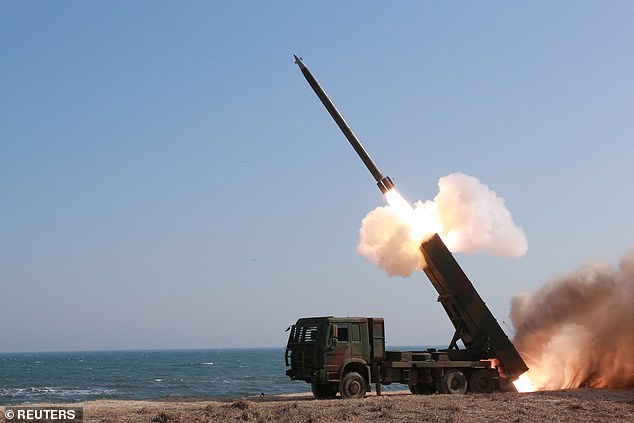 According to a script of his interview with the BBC shared by his office with Reuters, Moon said: ‘By complete denuclearisation, he meant to start by stopping additional nuclear and missile tests, and then abolish the facilities that produce the nukes and develop the missiles, and all the existing nuclear weapons and materials.

Reclusive North Korea and the rich, democratic South are technically still at war because the conflict ended in a truce, not a peace treaty.

Nuclear diplomacy had previously stalled due to suspicions over how sincere North Korea is about its disarmament pledge.

The United States has insisted on irreversible steps towards denuclearisation before sanctions can be lifted.

And when the North makes substantial progress in denuclearisation, a gradual easing of economic sanctions Pyongyang should be ‘seriously considered’, Moon said.

He added: ‘Ending the war is a sort of a political declaration to terminate the longstanding hostile relationship between the United States and North Korea, and it would kick off peace negotiations depending on the denuclearisation process.

‘There is consensus between South Korea and the United States that it is desirable to make the end-of-war declaration at an earliest possible date, so I think it’s a matter of time but it will definitely happen.’ 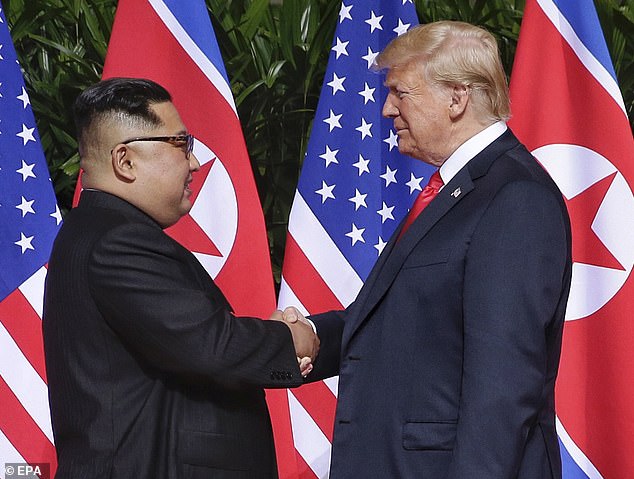 President Donald Trump and North Korean leader Kim Jong-un shake hands at the start of a historic summit at the Capella Hotel on Sentosa Island, Singapore, in June 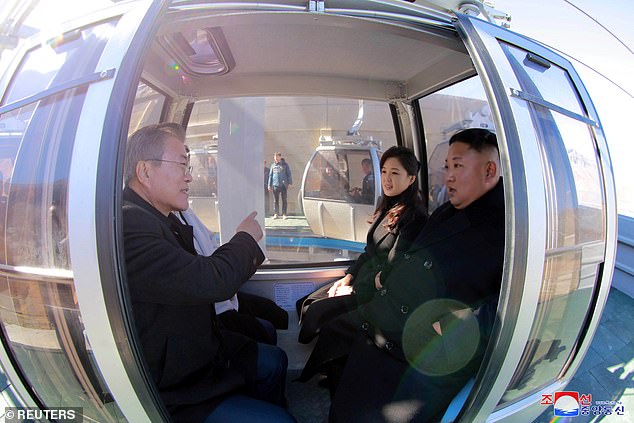 According to Moon, Kim has agreed to completely denuclearise – although a timetable has not been set for disarmament 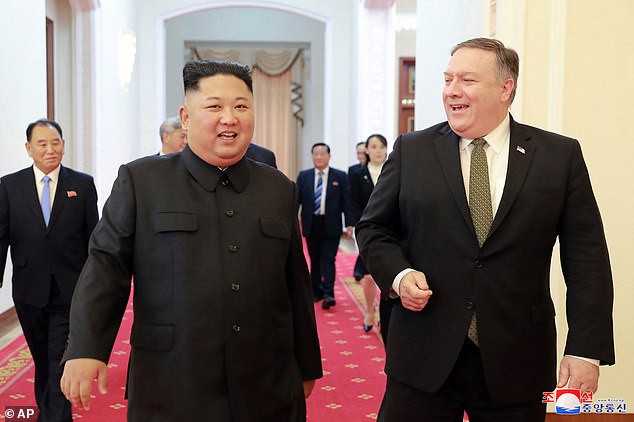 His comments come amid US concerns that inter-Korean relations may be warming too fast relative to negotiations to dismantle North Korea’s weapons programmes.

US Secretary of State Mike Pompeo has expressed ‘discontent’ with an inter-Korean military pact reached during last month’s summit in a rare sign of disagreement between the allies.

The two Koreas agreed in that accord to halt military drills, set up a no-fly zone near the border and gradually remove landmines and guard posts within the Demilitarised Zone, among other steps.

Moon also said Pyongyang and Washington were in working-level discussions to arrange a second summit as soon as the US midterm elections are over.

Trump said on Tuesday his second summit with Kim would be held after the elections slated for November 6. I

t remains unclear what steps the United States plans to take towards denuclearisation ‘of the Korean peninsula’, a reference North Korea has used in the past to include the US nuclear umbrella in the region.

Seoul’s Unification Ministry said on Friday the two Koreas would hold high-level talks on Monday at the border village of Panmunjom.

At last month’s meeting, Moon and Kim agreed to resume economic cooperation, including relinking railways and roads and reopening a joint factory park and tours to the North’s Mount Kumgang resort, when conditions are met.