Parents of children attending a nursery at the heart of a police sexual abuse probe claimed Wednesday night they had been left in the dark about the severity of the situation.

Families said they were ‘wholeheartedly reassured’ by Jack and Jill Childcare in Torquay, Devon, that an incident in the summer was ‘a one-off’ and was ‘isolated’.

It was only following media reporting of the case this week that they realised how serious the accusations were.

Many fear they still do not know the extent of the claims that led to a male employee being arrested in July after a child told their parents about an alleged serious assault. 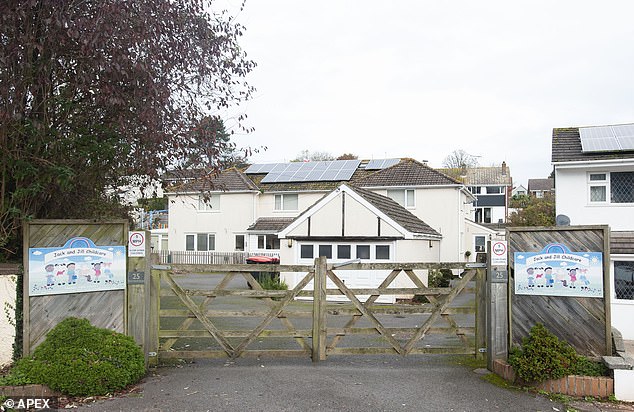 Jack and Jill Nursery (pictured today) has been temporarily closed. Many fear they still do not know the extent of the claims that led to a male employee being arrested in July after a child told their parents about an alleged serious assault

Others questioned why the male worker, who is thought to be in his teens, was apparently left alone with their children – despite nursery rules that forbid this.

Police have reviewed more than 250 hours of CCTV footage from Jack and Jill Childcare.

Last week, they contacted more than 100 families of children at the nursery to inform them of the investigation. It is thought there could be 12 victims aged between two and five out of a total of around 52 at the nursery.

But one father raised concerns last night that there could be more the police do not know about because, he claimed, CCTV cameras did not cover the entire nursery.

He said: ‘There is not CCTV across the whole of the nursery. So while police have been able to watch all this CCTV, there are some areas where they won’t have seen anything.

‘A lot of parents have been told their children are not thought to be victims, but they are now worrying about everything their children says and does and whether it suggests otherwise. ‘The police have said more stuff might come out. What has really angered parents now is… that there are still an enormous number of parents who are still almost completely in the dark on what has happened and is happening.’

A mother who has a child at the nursery also questioned how children had apparently come to be left alone with the suspect.

She said the nursery ‘swore to us that our daughter was 100 per cent safe’, adding: ‘Questions need to be asked how this employee had sufficient time alone with the children and how something this serious could have been allowed to happen.

‘We were informed by police that our daughter was in one of the nursery rooms where this employee worked and would have had regular contact with our child.

‘Thankfully they don’t think she is among the victims. To even think that my daughter was in the nursery during the alleged events sickens me to the core. We have found it all very hard to deal with. We really feel the owners should also be held accountable.’

But John Nelson, who owns Jack and Jill Childcare with his wife, Pam, and daughter, Lindsay, said: ‘Nobody is allowed to be with any child on their own at any point.’

He added: ‘I would find it incredible if any other member of staff was complicit in anyway.’

Inspectors from Ofsted suspended the licence of Jack and Jill Childcare last month in the wake of the police investigation.

In a notice posted on the nursery’s window, it said: ‘The purpose of the suspension is to allow time to investigate our belief that a child may be exposed to a risk of harm and for any necessary steps to be taken to eliminate or reduce the risk of harm.’