PIERS MORGAN: Full marks for cunning, Detective Coleen, but if you were originally posting your secrets to 367 people they weren’t secrets

There was a simple reason Osama Bin Laden took ten years to catch and kill: he made it very, VERY difficult to invade his privacy.

Whether the Al Qaeda chief was hiding in the caves of Afghanistan or, later, his luxury villa in Abbottabad, Pakistan, he shunned cell phones, the internet, and any other form of modern communication that might have identified him or his location.

It goes without saying that Bin Laden also declined to share his real-time thoughts or images on social media.

There was no Trump-style daily blizzard of tweets, or cosy Facebook updates, or heavily filtered Instagram photos.

Trash was burned before it was put out, and messages were delivered verbally by trusted human couriers.

Bin Laden did all this because he wanted to stay private from the prying eyes and ears of America’s intelligence operatives who were desperate to find him and bring him to justice for 9/11. 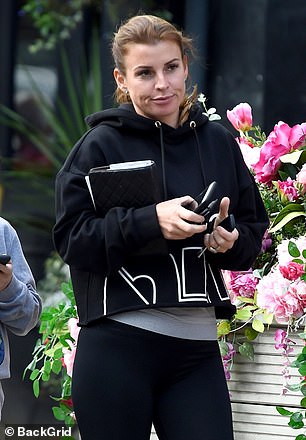 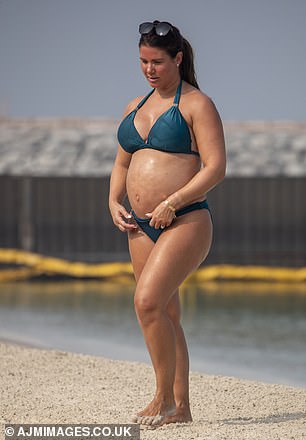 Drama: Coleen Rooney (seen left on Wednesday) and Rebekah Vardy (seen right last month in Dubai) have begun a very public and very salacious feud after Rooney accused Vardy of leaking information about her to The Sun gleamed online from her private Instagram account

The fact the world’s most wanted man was able to evade capture so successfully for so long is a testament to the vile monster’s willpower in NOT succumbing to the modern equivalent temptation of Eve’s apple to Adam.

He understood that once you go online, you draw a line right to yourself. 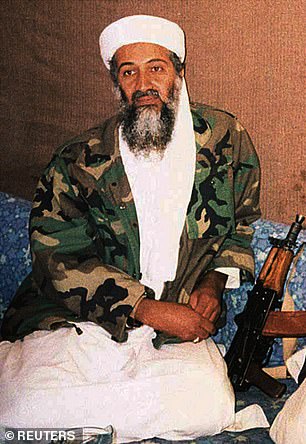 Master of secrecy: Osama bin Laden managed to evade capture by adhering to strict rules designed to keep his profile to a total minimum

I thought of Bin Laden when I read about the staggeringly salacious saga of two feuding England footballers’ wives that’s now been dubbed a ‘Wagatha Christie’ mystery thriller. (WAG is the nickname given to players’ Wives and Girlfriends)

Coleen Rooney, who is married to Wayne Rooney, England’s record goal-scorer now playing for MLS club D.C. United, grew suspicious that one of her friends was leaking information from her personal Instagram account to UK tabloid newspaper The Sun.

So she turned detective, blocking every one of the people she followed apart from her suspect, and spending months posting fake stories about herself and her family that only that suspect would now see.

These included her and Wayne seeking gender-selection help in Mexico for another baby after they had four consecutive boys, Coleen planning a return to TV, and most recently, the basement of their mansion flooding during a storm.

All these untrue stories duly appeared in The Sun, leading Coleen to conclude that her suspicions were correct.

But rather than confront the target of those suspicions privately, she did it in a new Instagram post, explaining what she had done, why she had done it, and sensationally naming her suspect as Rebekah Vardy – wife of another England player, Jamie Vardy.

And that’s where the scandal took an explosive new twist, as furious Vardy hit back by emphatically denying ever leaking any stories about the Rooneys, suggesting it may have been somebody else who had access to her account (apparently at least seven or eight people did over the past few years) and announcing she has launched an immediate ‘forensic’ investigation into the bombshell allegations. 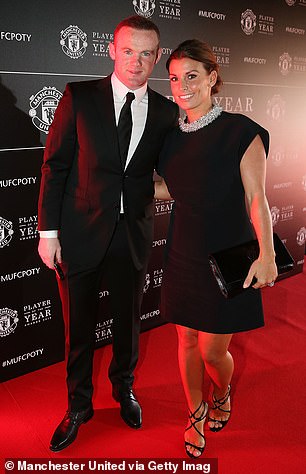 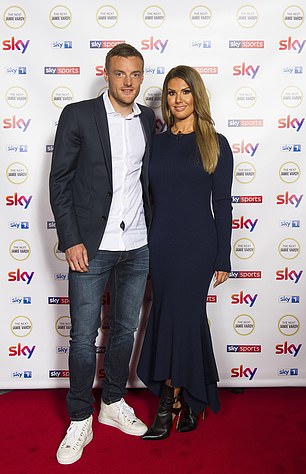 I enjoyed a riotously entertaining dinner in Los Angeles with Coleen and Wayne several years ago, have exchanged occasional emails with her, and she’s a smart, funny, feisty, no-nonsense lady.

I’ve also interviewed Rebekah many times, had regular amusing text message conversations with her, and indeed only last week she invited me to be her guest at a forthcoming Premier League match between the team I support, Arsenal, and her husband’s team, Leicester. 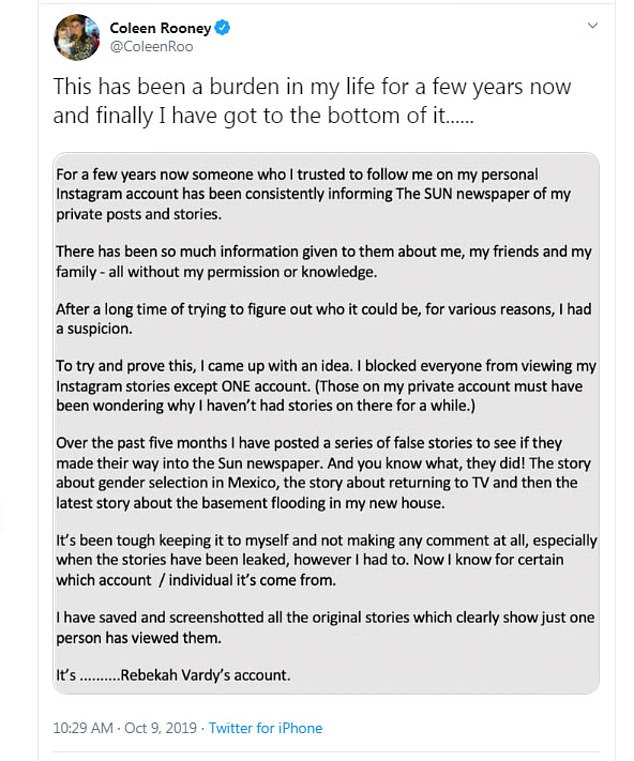 Bombshell: Coleen Rooney slammed Rebekah Vardy with this incredible and accusatory Twitter post claiming she had deduced that Vardy was leaking stories to The Sun

So I’m not going to take sides here, particularly as nobody yet knows what really happened.

But as the world reels from this shocking tale of alleged betrayal between the high profile spouses of two of fabulous footballers, I am more intrigued by what it tells us about the notion of modern-day privacy.

Coleen Rooney has two Instagram accounts, one ‘public’ and one ‘private’.

On her public one, she has 815,000 followers and she herself follows 121 people or entities.

It’s the second account that is at the centre of this furore, because Coleen believes everything she posts there is ‘private’ and only shared with people who she has allowed to follow her, and who she supposedly trusts enough not to repeat anything they see posted.

And it’s at this point that I raise a slightly quizzical eyebrow.

I only completely trust about 20 people in the entire world, including close family members and long-time friends.

They are the people I know for sure would never let me down, and who would get out of bed at 4am to help me if I was in trouble. 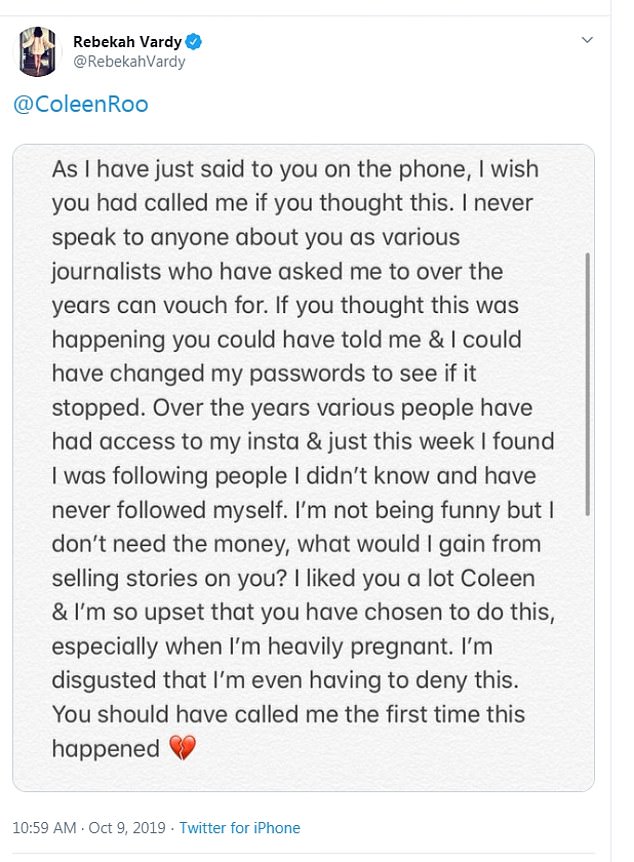 Hitting back: Rebekah Vardy replied very soon after the jaw-dropping allegations and completely denied that she was at fault or to blame for anything being leaked about Coleen Rooney and her family

These include former work colleagues, newer friends, distant family and various celebrities, none of whom I would completely trust. That’s not to denigrate them, or impune their honour, it’s just a reality check that if I suddenly posted something surprising like ‘Hi everyone, I’m gay and planning to announce my forthcoming civil partnership with David Hasselhoff on live TV tomorrow’, I would expect that revelation to become public in about three nano-seconds, possibly sooner.

So why would Coleen Rooney, who is massively famous herself and married to one of the most famous people in British sporting history, ever think her posts to 367 people would remain ‘private’?

She may as well run into the street, scream out her secrets, and hope for the best that nobody runs to the papers.

That’s not to defend Rebekah Vardy if she did leak those stories, or whoever else may have done it from her account.

If it WAS her, it would clearly constitute a terrible betrayal of her friendship with Coleen.

But I’ve spoken to Rebekah today and she is absolutely adamant it wasn’t her.

I’d certainly find it hard to understand if it was; she’s married to a multi-millionaire, so doesn’t need the money, and the stories aren’t damaging to the Rooneys so can’t be attributed to any seething jealousy on Ms Vardy’s part as some are suggesting. Why else would she do it?

Rebekah’s also seven months pregnant with her fifth child, and is now being bombarded with horrendous abuse from trolls gleefully assuming she is guilty.

Regardless of whether she is not, this seems a very odd and insensitive time for another mother to publicly shame a long-time friend in this way.

Couldn’t Coleen have just picked up the phone and had it out with Rebekah in private?

Instead, she’s ignited a global fireball of gossip, intrigue and savage attacks on her now banished heavily pregnant friend that may lead down all kinds of tricky sidewalks.

Put it this way: I suspect Rebekah Vardy has gleaned far juicier information from Coleen about the Rooneys than whether their basement got flooded.

On the wider point though, I still don’t understand how the hell Coleen ever thought posting stuff on Instagram to 367 people was ‘private’?

If you truly want something to remain 100% private then I’m afraid you’ve got to take a leaf out of Osama bin Laden’s book and view all electronic communication, and social media in particular, as a clear and present danger to your privacy.