Police ‘missed chance to save Jaden Moodie’: Teenager, 14, who was killed in drug turf war ‘was found in crack den three months earlier but no action was taken to safeguard him’

A chance to protect a 14-year-old boy from a drugs turf war was missed when he was found in a crack den three months before he was killed, a report has found.

Jaden Moodie was rammed off his moped by members of a rival gang and stabbed nine times in a frenzied attack in Leyton, east London, on January 8 last year.

A Serious Case Review published today found the teenager had been groomed by criminal gangs for at least a year before he died.

It also claimed agencies had missed opportunities to protect him, with his family’s lawyer, Alice Hardy, insisting the report showed Jaden was ‘failed by the system.’

In October 2018, Jaden was found at a flat in Bournemouth with 39 wraps of crack cocaine, two larger packages of the class A drug, an unregistered mobile phone and £325 in cash.

Jaden Moodie (pictured) was rammed off his moped and stabbed nine times in a frenzied attack in Leyton, east London, on January 8 last year 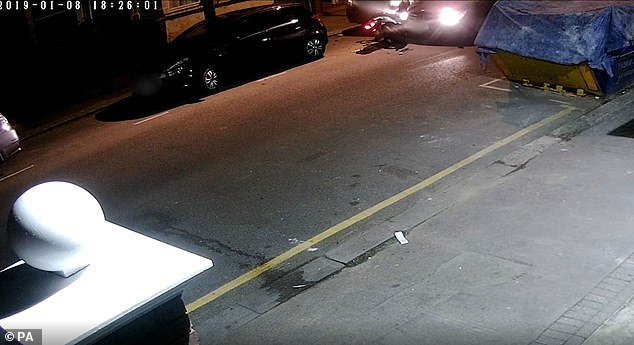 Pictured: The moment Jaden was knocked from his moped by a car on January 8 last year

Police believed the flat was a ‘cuckoo’ property – one taken over by county lines drugs gangs to use as a base for dealing.

Jaden – who associated with organised London gang the Beaumont Crew – was arrested for possession of class A drugs with intent to supply.

According to the review, his appropriate adult during police interview said he appeared to be ‘a vulnerable young person frightened by what he was being groomed and coerced into by others’.

The teenager also gave the impression ‘he definitely wanted to find a way out of the mess he was getting into’, they said.

After the interview, his mother, Jada Bailey, was contacted to go and collect him from where she was living in east London, but she cannot drive.

No-one was available from Waltham Forest Council to make the journey as it was 11pm, and so ultimately two Dorset Police officers drove Jaden home.

The review, which refers to Jaden as Child C, found that this was a ‘missed opportunity’.

It said: ‘The arrangements for responding to Child C and eventually returning him to London in particular represent a missed opportunity. 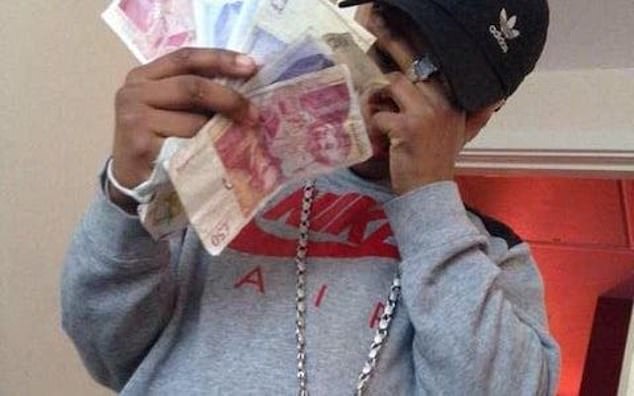 Jaden, pictured above with cash, was said to be associated with the Let’s Get Rich gang 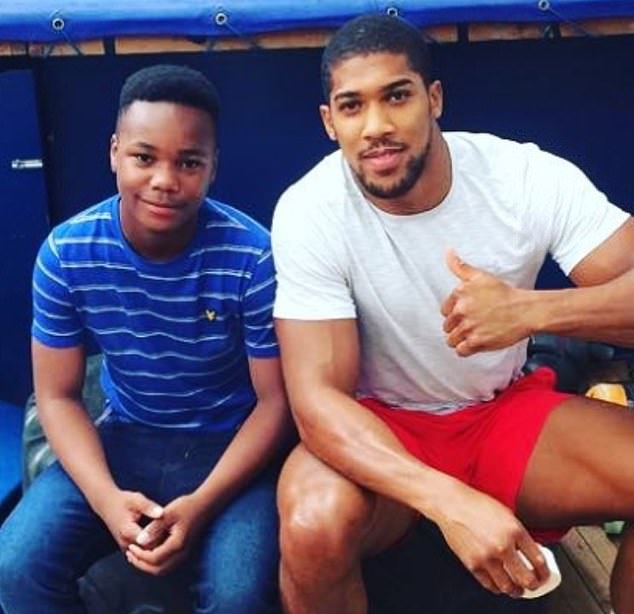 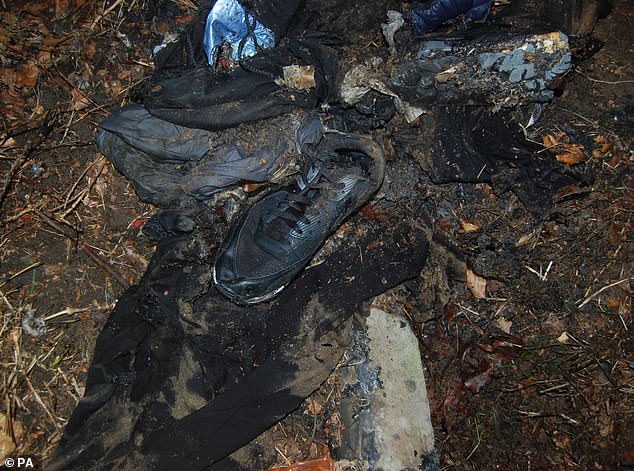 Burnt clothes, including Nike trainers, matching those of the attackers were found in a churchyard after his murder

‘Had it been possible for Child C to have met specialist child exploitation workers while still in custody, and then brought back to London by these workers, and ideally if they could have continued to work with him for a time after his return, I believe such workers would have been able to exploit the ‘reachable moment’ of this crisis in the police station, during the car journey, and then subsequently, and start exploring with Child C the risks to him of his vulnerability to exploitation.

‘But this was not the brief of the Dorset Police officers who were providing a well-intended but basic service in driving Child C back to London.’

The review also found there were delays in dealing with the family’s housing needs – at the time of his death Jaden was sleeping on his grandmother’s sofa.

However, it concluded that his murder could not have been anticipated.

Waltham Forest Council said it accepted all the recommendations in the review and now has a service to respond within 24 hours when a child is identified as a victim of criminal exploitation.

It also called for greater powers to protect children who are home-schooled from falling prey to criminal gangs.

Jaden spent just three of the last 22 months of his life in school, with his mother trying to educate him at home and attempting to get him back into mainstream education.

In November 2018, he was permanently excluded from school in Waltham Forest after he was seen in a Snapchat video holding what appeared to be a gun. 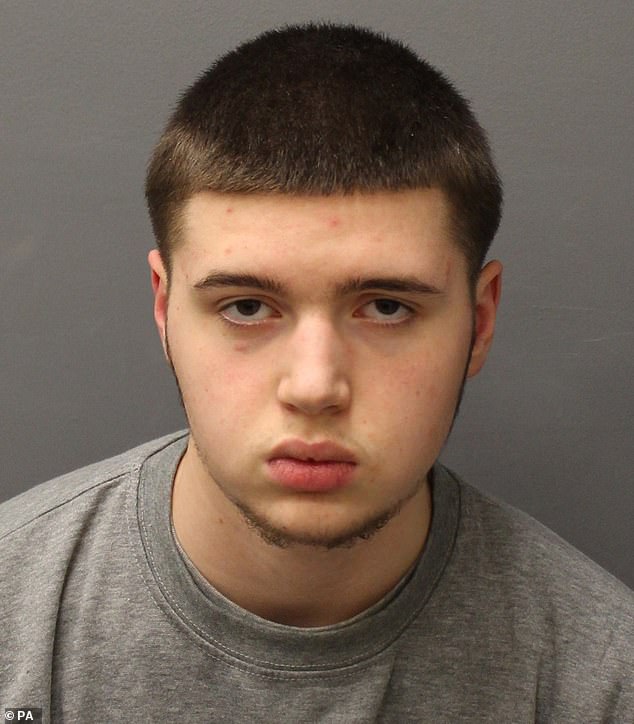 Ayoub Majdouline (pictured), 19, from Wembley, north-west London, was jailed for life in December for Jaden’s murder 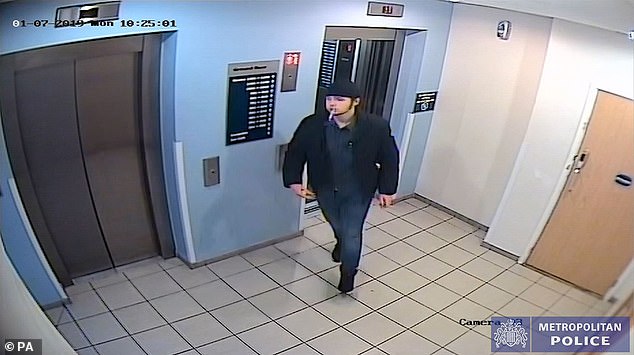 Majdouline at a Travelodge hotel before he stabbed Jaden in Leyton, East London, on January 8

Council leader Clare Coghill said: ‘We agree with the findings of the review that there is an urgent need for a national register of home-schooled children.

‘We think that this should go further by ensuring minimum standards for children being home-schooled.

‘Until this is in place, we cannot have full confidence that children are safe, receiving a decent education, and protected from criminal exploitation.’

The teenager’s family said they agreed with ‘many of the findings’ of the report, with their lawyer Ms Hardy adding it showed the teenager was ‘failed by the system.’

‘Jaden was both homeless and out of school at the time of his death, both of which could have been prevented,’ she said.

‘The report shows there is no effective system in place to respond and help children at risk from exploitation through county lines.’

Ayoub Majdouline, 19, from Wembley, north-west London, was jailed for life in December for Jaden’s murder.

Majdouline was one of five youths linked to the Mali Boys who drove around in a stolen Mercedes looking for members of the Beaumont Crew gang to attack.

When they came across Jaden, who was out dealing drugs on a scooter, they crashed into him and ‘butchered’ him as he lay seriously hurt and defenceless on the ground.

How Jaden came to London for a ‘new start’ 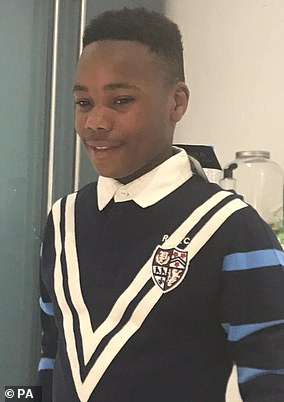 Jaden Moodie moved to the capital from his home city of Nottingham in 2018 with his mother Jada and four older siblings.

They came to east London in search of a ‘new start’ after Jaden was caught in the street with a pistol and a Rambo knife and handed a caution when he was 13.

Relatives believed the young Arsenal fan would benefit from moving closer to his grandma, who lived in the Leyton area.

But within six months he became the youngest casualty of a bloody war between two rival gangs laying claim to Waltham turf.

According to Oliver Glasgow, prosecuting at the murder trial of Ayoub Majdouline last year, Jaden was ‘no ordinary 14-year-old’.

His Instagram and Facebook accounts were littered with selfies captioned ‘driller’ and ‘trapper kid’ – urban slang for a young drug mule.

He posed in a balaclava on mopeds without number plates making gang sign gestures and waving bundles of £50 notes.

Despite harbouring dreams of becoming an entrepreneur and making the top sets at Heathcote School in Chingford he was excluded just weeks before his death for the troubling social media posts.

The talented youngster started his own clothing line at 13 and a keen interest in boxing saw him meet heavyweight champion Anthony Joshua.

But he was also mired in a shadowy underworld of County Lines drug-dealing.

Police discovered Jaden at a Bournemouth address with a wad of cash and wraps of crack cocaine in October last year.

He had been pushing drugs for the Beaumont Crew – AKA Let’s Get Rich – one of the largest and most organised gangs in London dating back to 1990.

The court heard the teenager had downplayed the trouble he was in up until his dying moment.

Three hours before tragedy struck he joked to a friend that he was ‘in beef again’ after a Beaumont ‘older’ paid him an ominous visit.

‘Your name has bullets in it,’ the kingpin warned. ‘Keep away from Beaumont, the road is not for you.’