Portland ‘Red House’ family in negotiations with city; blockades to come down at occupation protest 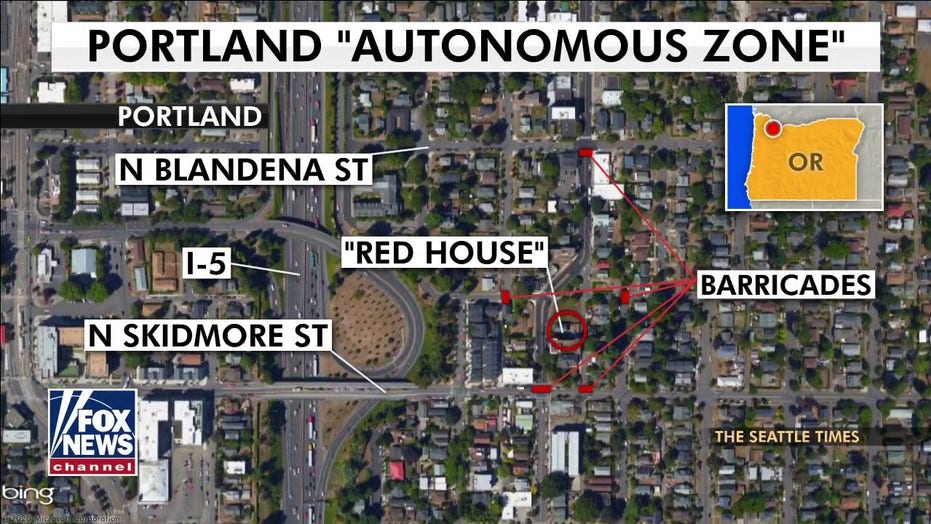 An activist group that organized an eviction blockade in Portland said Sunday the family who previously owned the so-called Red House, on Mississippi Ave., has reached an agreement with Mayor Ted Wheeler, and the heavily fortified barriers preventing access to the neighborhood would come down.

Red House on Mississippi, an account that has tweeted directives for those participating in the occupation, said Sunday, “Our work is not going unseen! The mayor has promised the Kinney family that they will not raid Red House as long as the barricades are taken down by Monday night.”

“The barricades are coming down, Ted Wheeler has apologized, and Portland Police has promised not to attack supporters,” the account tweeted. It also asked “comrades” to come down to 4406 N. Mississippi Ave as soon as possible to bring “all hands on deck” to ensure the barricades come down.

Wheeler’s office did not immediately return an email from Fox News early Monday requesting more information about negotiations between the family and protesters.

According to a copy of a letter first obtained by The Oregonian, Wheeler and Portland Police Chief Chuck Lovell on Saturday apologized to the Kinney family for statements and tweets made earlier in the week. 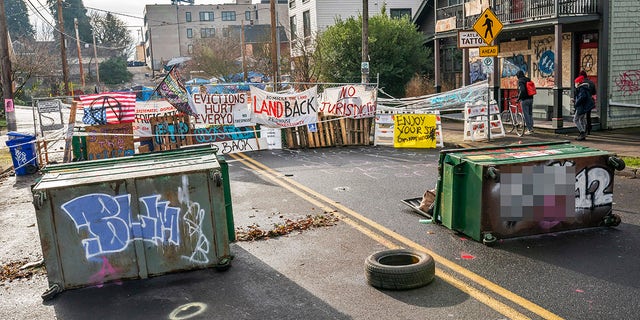 Barriers surround the Red House, whose residents are up for eviction, on December 10, 2020 in Portland, Oregon. Police and protesters clashed during an attempted eviction Tuesday morning, leading protesters to establish a barricade around the Red House. (Photo by Nathan Howard/Getty Images)

“We apologize and understand that following our tweets earlier this week that your family received threats,” the letter said. “We did not intend to attract attention that results in threats of harm and violence to your family or that escalated tensions in our community. Nobody should be subjected to this kind of stress and harm, and we apologize for the role our tweets played in this.”

Protesters have been camping out in the front and back yards of the house since Sept. 9, when deputies with the Multnomah County Sheriff’s Office first arrived to serve a court notice ordering the eviction of those living at the address. But the situation first garnered national attention last week, when law enforcement conducted a dawn sweep at the property, arresting about a dozen people before a volatile crowd tossed objects at officers, who then withdrew from the scene.

After the sweep, Wheeler said on Twitter that he was “authorizing the Portland Police to use all lawful means to end the illegal occupation.” He added that he would not tolerate an “autonomous zone” in Portland.

Wheeler and Lovell promised in their letter Saturday to assist the Kinney family in finding temporary housing and effective legal counsel, The Oregonian reported.

In a statement to the newspaper, Wheeler added that he maintained “measured optimism that we can accomplish this step and move toward the next steps to advance the safety and well-being of the family and the safety of the neighborhood.”

Red House on Mississippi also criticized what they categorize as mainstream media for their coverage of the so-called occupation. It asked members of the press to contact the Kinney family directly for an interview and directed supporters to “think critically” to consider the ways “big banks, city governments, and developers have the resources and connections to sway the narrative for their own personal gains.”

The group did not immediately return an email from Fox News early Monday requesting an interview.

Using fencing, lumber, and other material, activists have erected barricades around the house, located in an area of homes, coffee shops, and restaurants in what was historically a Black neighborhood but has become gentrified. Protesters also have placed homemade spike strips, piles of rocks, and thick bands of plastic wrap stretched at neck-height across the road to keep law enforcement officers out.

In a possible de-escalation of the situation, the real estate investor who now owns the Red House has offered to sell it back to the former owners at cost, The Oregonian reported Friday.

“We are a small family business. We don’t seek to hurt anyone of course,” said Roman Ozeruga, a real estate investor who bought the home at a foreclosure sale in 2018 for $260,000. "We’ve already offered to sell back the property at cost because of course we’ve paid taxes, legal fees, bank fees, etc.” 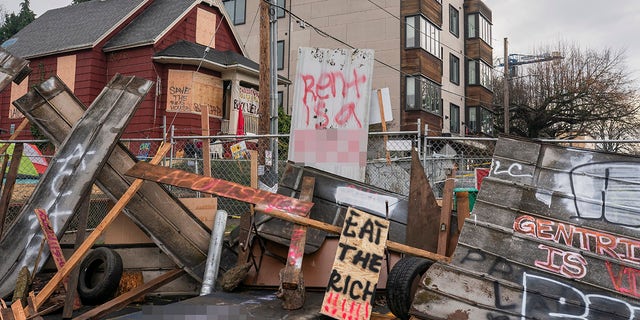 Barriers surround the Red House, whose residents are up for eviction, on December 10, 2020 in Portland, Oregon. Police and protesters clashed during an attempted eviction Tuesday morning, leading protesters to establish a barricade around the Red House. (Photo by Nathan Howard/Getty Images)

It was not immediately clear whether the agreement tweeted about Sunday involved Ozeruga selling the Red House back to the Kinneys. A GoFundMe page set up to “Save the Kinney Family Home” raised more than $308,000 by Sunday – enough to buy back the home.

On Friday, Multnomah County District Attorney Mike Schmidt said in a statement that the situation demonstrated a “pressing need for our community to come together to address our housing crisis, economic inequalities, racial and social injustices, and to be mindful of the collateral consequences that the criminal legal system can have on destabilizing families and entire communities.”

He praised “the neighbors and community members who have refused to stand by silently” and instead raised alarms about what was happening to the Kinney family that had owned the house since the 1950s and was evicted.

“Now, we understand and feel more keenly that foreclosures and evictions, even when afforded due process, can have cascading effects,” Schmidt wrote. “The shame is that it took this type of intervention to bring so many together to want to remedy the situation.”

Schmidt also said neighbors are scared to leave their homes and noted that journalists who went to the scene this week were allegedly assaulted. One suffered a hand injury when a protester slapped her cellphone from her hand while she was recording a video.

“Continued violence, property damage, and harm to our community is inexcusable and will be met with aggressive prosecution,” the district attorney said.  He said blockades must come down and that he remained optimistic that ongoing negotiations would produce “mutually beneficial outcomes for the family and the current property owner.”