Rishi turns on the spending taps AGAIN: Chancellor unveils BILLIONS more for stricken bars and restaurants in Tier Two lockdown and the self-employed after fury at ‘loopholes’ leaving them high and dry

Rishi Sunak today unveiled yet another bailout with billions of pounds for stricken bars and restaurants under Tier Two lockdown and the self-employed.

In a dramatic Commons statement, the Chancellor boosted support for sectors like hospitality after a wave of anger at ‘loopholes’ in his existing provision.

He said it was clear ‘open but struggling businesses require further support’. The government will cover more of the cost of staff on reduced hours, with just a 5 per cent contribution required from employers. There will be a one day a week minimum hours requirement, down from 33 per cent.

Firms in high risk areas will get bolstered grants of up to £2,100 a month, backdated for areas under restrictions. Mr Sunak said 150,000 could benefit, with the costs potentially hitting £1billion.

The package for the self-employed is being hugely scaled up, with grants increased from 20 per cent to 40 per cent of average profits until April. The cost up to January is estimated at £3.1billion, but could end up double that by the spring.

While businesses forced to close in the harshest Tier Three areas can access significant funding, there has been less available for ‘high risk’ Tier Two regions such as London and Essex – even though the ban on households mixing indoors means that many are getting hammered.

Tory MPs have been increasingly alarmed at the gap, amid warnings that the crisis is set to drag on well into next year. Shocking official figures today show that 17 per cent of firms in the accommodation and food services industry are at ‘severe’ risk of becoming insolvent.

Mr Sunak held a breakfast briefing with business leaders to outline the changes, before confirming them in the House.

However, the tightrope the Chancellor is walking was starkly illustrated yesterday when it emerged the government has borrowed more than a billion pounds every day during the pandemic. 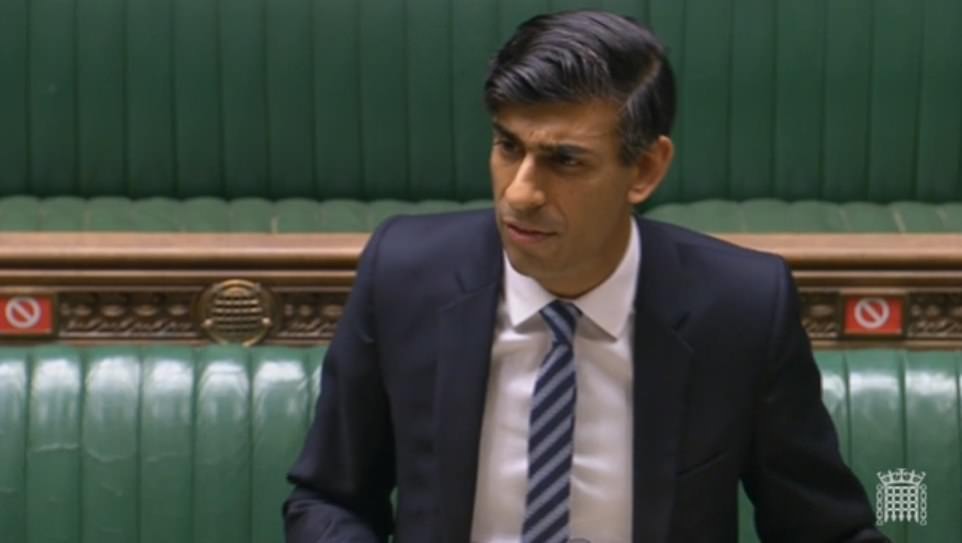 In a dramatic Commons statement, the Chancellor boosted support for sectors like hospitality after a wave of anger at ‘loopholes’ in his existing provision 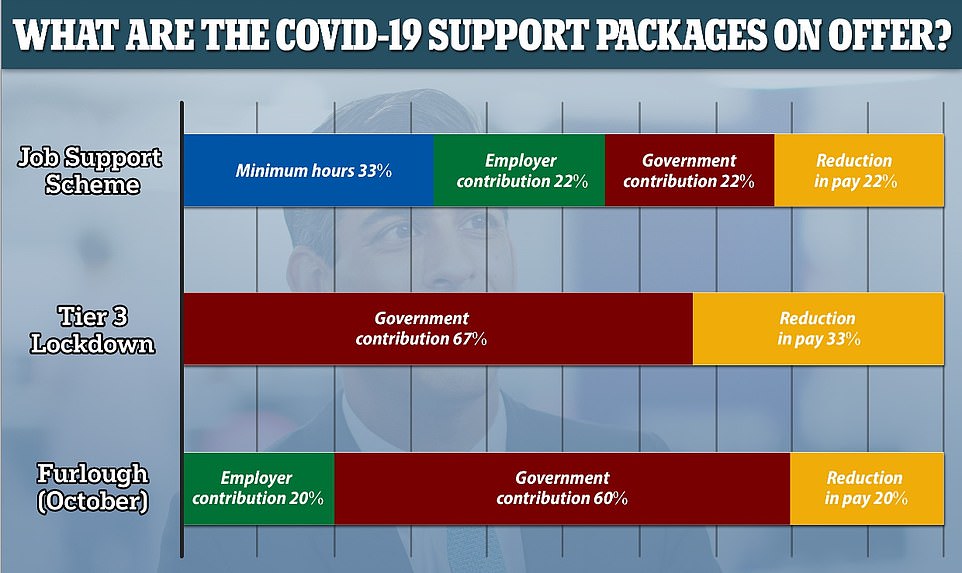 While businesses forced to close in the harshest Tier Three areas can access significant funding, there is less available for ‘high risk’ Tier Two regions such as London and Essex – even though the ban on households mixing indoors means that many are getting hammered 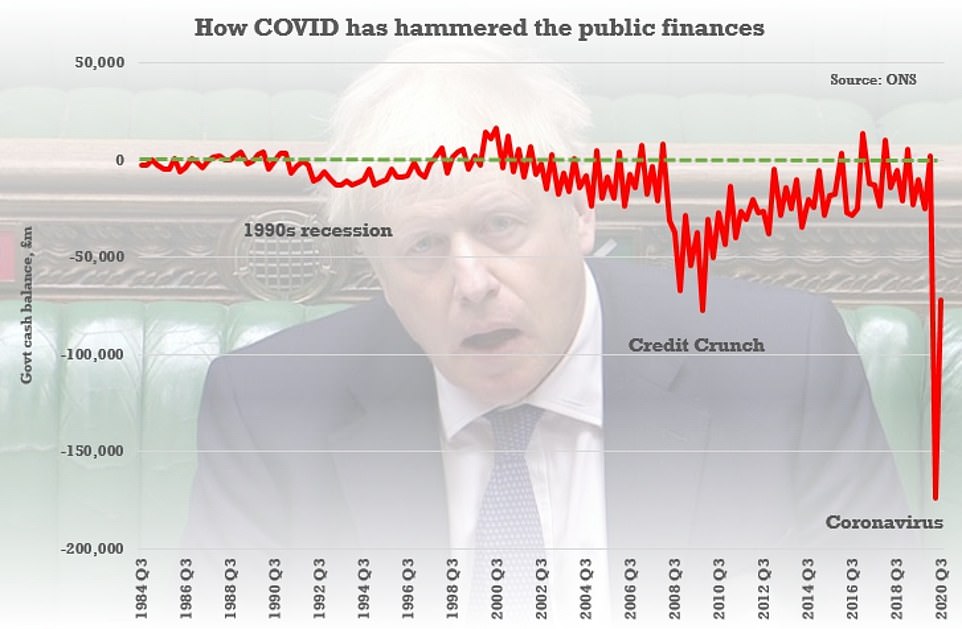 The Chancellor (pictured in Downing Street yesterday) will update MPs this morning on a package of support set to cost hundreds of millions of pounds to help firms in sectors such as hospitality, which have been badly hit by new restrictions this month

Another £36.1billion was borrowed in September – the third-highest month on record and compared to just £7billion a year ago – as tax revenues slumped and the Treasury poured out bailout money

The officer leading the national police response to the pandemic yesterday admitted he did not know the lockdown rules.

The assistant chief constable proved his point by failing to clarify that households must not mix indoors in Tier Two areas.

Questioned on the issue, he could only reply: ‘I have not got the regulations in front of me so I cannot give you a definitive answer on that.

‘There are so many different variations – I am not conversant with every set of regulations.’

Another police chief also slipped up during the farcical session of the Commons home affairs committee.

Lancashire Chief Constable Andy Rhodes said: ‘The big one for me moving from Tier Two to Three is your household not mixing with others inside your household – not mixing or going out for a meal with people from another household.’

As the Chancellor poured more money into struggling UK plc:

Addressing MPs today, Mr Sunak said there were ‘difficult days and weeks ahead’.

‘Let me speak first to the people of Liverpool, Lancashire, South Yorkshire and Greater Manchester and indeed other areas moving into or already living under heightened health restrictions,’ he said.

‘I understand your frustration, people need to know this is not forever. These are temporary restrictions to help control the spread of the virus.

‘There are difficult days and weeks ahead, but we will get through this together. People are not on their own. We have an economic plan that will protect the jobs and livelihoods of the British people wherever they live and whatever their situation.’

‘Just as we have throughout this crisis, we will listen and respond to people’s concerns as the situation demands,’ he said.

‘And I make no apology for responding to changing circumstances and so today we go further.’

He added: ‘The evidence is clear – a regional, tiered approach is the right way to control the spread of the virus.’

Firms forced to close in Tier Three, such as betting shops and soft play centres, will be able to furlough their workers on two-thirds of wages.

But there has been an outcry from hospitality firms in Tier Two, whose business models have been wrecked by restrictions that mean people can no longer meet socially indoors.

Tier Two restrictions now cover many of the most heavily populated parts of the country, including London, Birmingham, York, Essex and the North East.

Under the Jobs Support Scheme (JSS), which officially launches from November 1, staff can have their wages topped up to 77 per cent of normal.

The state and employer each fund 50 per cent of the cost of hours not worked. But critics have warned that the scheme gives too little incentive to firms to retain staff.

But Mr Sunak cut the cost of the employer’s contribution, with the state picking up more of the bill.

Earlier, West Midlands Mayor Andy Street said he was ‘optimistic’ the Chancellor will close the loopholes.

‘The government have given incredible support to businesses, but clearly this particular point was just one that was completely missed in planning the tier 2 restrictions so I am really optimistic that they will respond,’ the Tory mayor told BBC Radio 4’s Today.

‘The government didn’t expect us to be in a position through the autumn where we were having a rising level of the virus to this extent, so if you look at the design of the winter economy package at the time that seemed rational but clearly events have moved very quickly.’ 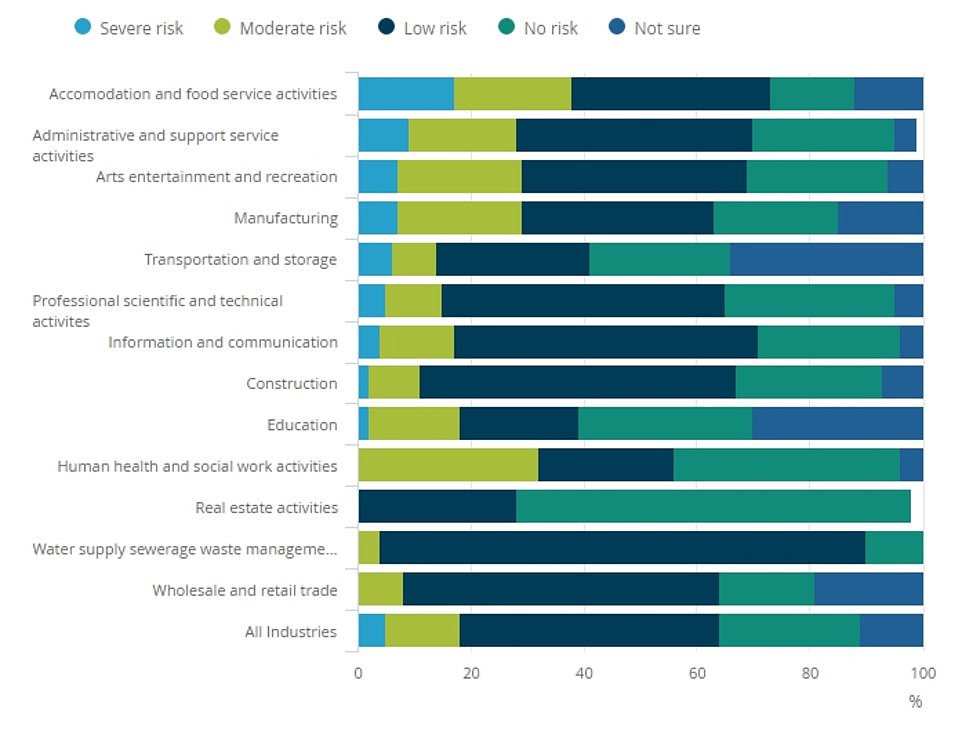 Boris Johnson meets members of the Armed Forces on the terrace of No10 Downing Street, to mark Black History Month

Families living in Tier Three areas should not go on holiday this half-term, Downing Street has confirmed.

No 10 encouraged everyone in the high-risk areas to not plan a getaway as school holidays begin this weekend.

Sarah Champion, Labour MP for Rotherham, asked the Government whether her constituents in South Yorkshire – which will be put into the ‘very high risk’ category on Saturday – would be able to get away.

The Prime Minister’s official spokesman said: ‘People should not travel outside the area except for a very short list of exemptions, such as for care or work purposes.’

He added that while this was not the law, it was clear in guidance.

Treasury sources were tight-lipped about the precise details of the new scheme last night.

But any adjustment of the employer’s contribution is likely to mean a large bill for the taxpayer.

The Treasury has modelled anything from two to five million people taking up the support at a cost of roughly £300million a month – a total cost of up to £9billion over six months.

Downing Street yesterday hinted at the move, with the Prime Minister’s official spokesman saying: ‘We do recognise that businesses operating in Tier Two will be facing difficulties because of reduced demand.’

Another proposal on the table is to broaden the criteria of the Job Support Scheme to include firms forced to close ‘by circumstance’ rather by law, according to the Telegraph.

Cash grant payments to hard-hit businesses of up to £3,000 a month could also be given to companies which are not legally requited to close but have shut because opening is commercially inviable.

Mr Sunak has come under mounting pressure to shore up jobs support after winding down the furlough scheme this month.

Sheffield City Region’s Labour mayor Dan Jarvis said: ‘The number of people with Covid in our hospitals has doubled over the last ten days, with no signs this will relent over the coming weeks. Inaction was not an option.’

Mr Jarvis appeared to take a swipe at Greater Manchester mayor Andy Burnham, who held out against a deal with ministers, saying South Yorkshire had ‘taken the responsible route to ensure we save lives and livelihoods, and protect our NHS’.

He added: ‘I honestly don’t think I could have got any more money out of the Government.’

But other senior figures in the region called for more financial aid. Louise Haigh, Sheffield Heeley MP and shadow cabinet minister, claimed ministers were ‘treating the North with contempt’.

But Downing Street said talks on moving the North East and Teesside into Tier Three had been ‘paused’ following a decline in the Covid rate.

Government sources played down reports that chief medical officer Professor Chris Whitty is drawing up plans for a series of regional ‘circuit breakers’ next month, with even tighter restrictions.

Pubs and restaurants in much of Scotland will remain closed for another week, Nicola Sturgeon said yesterday.

The First Minister said restrictions introduced at the beginning of October – which were intended to last for two weeks – would continue for a third week.

It follows the announcement that there have been 1,739 positive tests reported in the past 24 hours and 28 deaths.

Miss Sturgeon added that a new five-tiered system of regional restrictions for Scotland would be brought in on November 2.