‘Utterly revolting’: Judge attacks schizophrenic who killed pensioner, 81, and drove wooden stakes through her mouth after she caught him breaking into her £2million home as he jails him indefinitely

A schizophrenic man armed with knives and machete who killed an 81-year-old pensioner and then drove three wooden stakes through her head and mouth before burning her naked body was described by a judge today as ‘utterly revolting’.

Tautvydas Narbutas, then 23, killed and desecrated the body of Albertina Choules after she had caught him climbing in through an upstairs window of her home early one morning in 2016.

Now, the full horror of the attack at her £2million home in Marlow, Buckinghamshire, has been revealed for the first time by a High Court judge.

Mr Justice Stuart-Smith told Lithuanian-born Narbutas: ‘What you did was deeply shocking and utterly revolting.’

Moments earlier, he had heard how the intruder had killed the Buddhist widow and put her naked body in a wheelbarrow before taking her into the garden of her home, in Marlow, Buckinghamshire. Albertina Choules (pictured), 81, was killed by Tautvydas Narbutas, then 23, after she caught him climbing through a window into her house, in Marlow, Buckinghamshire 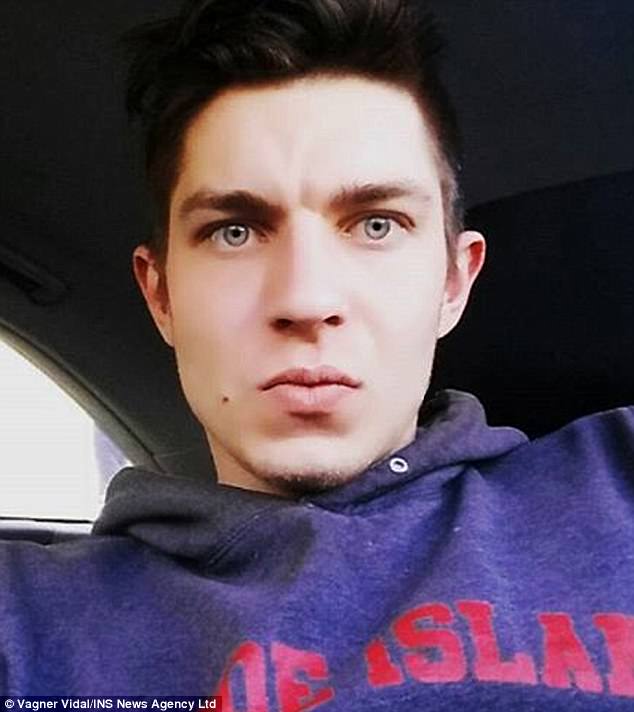 There, he drove three wooden stakes through her mouth and head. He also cut off her ring finger. The ring was later found lying nearby, outside the woodland cottage.

The judge said that he then put Mrs Choules’s naked body on a fire in the garden and proceeded to strip naked himself as police arrived following the terrified victim’s 999 call to summon help as she fought with Narbutas throughout the house before succumbing to the ferocity of his attack.

Narbutas, now 25, admitted killing Mrs Choules before dragging her outside and setting her alight.

The prosecution had accepted a guilty plea to manslaughter not murder because he has a psychotic disorder which makes him less responsible for his actions. 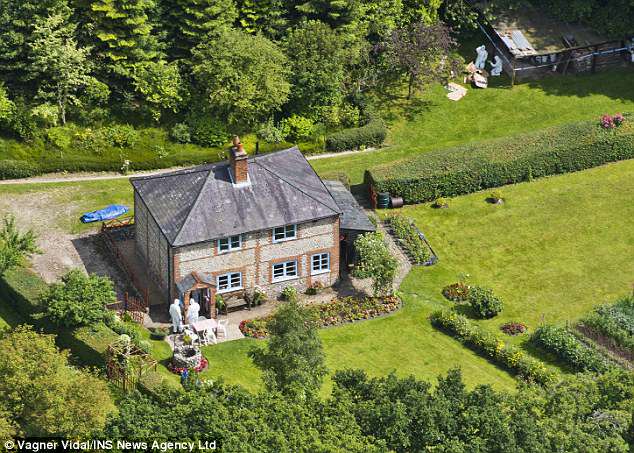 Narbutas drove three wooden stakes through Mrs Choules’s mouth and head. He also cut off her ring finger. The ring was later found lying nearby, outside the woodland cottage. (Above, police at the Italian-born widow’s home, after the attack, in 2016)

Sentencing him to serve an indefinite hospital order starting at Broadmoor Hospital, Mr Justice Stuart-Smith, said to the schizophrenic: ‘What you did was deeply shocking and utterly revolting to anyone in their right mind.

‘You broke into her home by an upstairs window and then attacked her with sustained ferocity inflicting the most terrible injuries and humiliating degradation upon her. 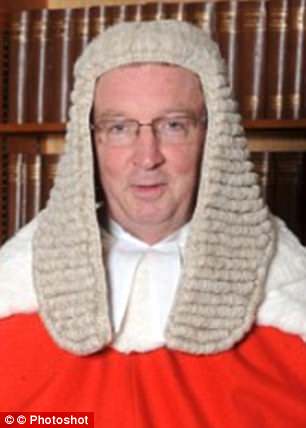 Mr Justice Stuart-Smith (above) told Narbutas: ‘You broke into her home by an upstairs window and then attacked her with sustained ferocity inflicting the most terrible injuries and humiliating degradation upon her’

‘After killing her, you desecrated her body. You took her out of her house and into her garden where you started a fire, onto which you put her naked body. At some point you severed one of her fingers and a ring was found nearby.’

The judge also commended the brave police officers who were first on the scene and advised they received a commendation for their actions.

He added: ‘When the police arrived, they saw you stoking the fire; you were then naked from the waist up.

‘Pc Coady thought he was going to die. The effects of that day will stay with him daily. Pc Crisp was under constant attack from you and has required considerable assistance to cope with the effects.

‘When reinforcements arrived you were seen completely naked and making aggressive gestures to the police and a helicopter. As they approached you had placed your hands firmly in the fire, but when challenged, you again became violent.’

Mrs Choules’s body was discovered in her garden at around 7.15am on July 6, 2016 after she made a 999 call to report a disturbance at her home.

Italian-born Mrs Choules lived without electricity in her home and would take care of the wildlife near the remote country house. Villagers were free to visit her estate as part of a Buddhist trail she built with her husband Michael, a fellow Buddhist convert, who died in 2004 after battling cancer.

At the time of her death, a statement from her family said: ‘Tina was incredibly special, as was her simple, self-sufficient way of life with no electricity, television or washing machine.

‘She never liked to sit still and worked tirelessly to maintain her beautiful garden and produce all year round. ‘Even in her old age she would chop trees, dig up flowerbeds and wrestle with her lovely dog, Georgie.

‘She was completely selfless in giving away her fantastic fruit and vegetables to friends and family as well as sharing her wonderful Buddhist Stupas [commemorative monuments] that she built with her own hands, with those that chose to walk in the woodland.

‘Her friends and family in both the UK and Italy miss her very dearly.’

Opening the sentencing for the prosecution, Alan Blake said: ‘The victim was commonly known as Tina, and she lived in a simple and remote cottage. She was originally from Italy, but lived in the UK for most of her life. She was particularly close with her niece who lived in London.

‘Despite her age, she was remarkably fit and able, living a spartan existence. She had an immaculate garden, that was her pride and joy. She had no previous links with Mr Narbutas.’

Moving on to the killer who was flanked in the dock at Reading Crown Court by three members of staff from Broadmoor Hospital, Mr Blake said: ‘At the time he was a 23-year-old male who had entered the country as an EU national.

‘He lived at a multi-occupancy address, with a number of friends and his ex-partner who had been with for around 18 months. This property was around two miles from Mrs Choules’s cottage.

‘He had previously worked in Norway and Sweden but he had decided to come to the UK to find a job. He came to the UK on June 9, only a month before the events and originally stayed in Luton with his uncle.’ Sentencing Narbutas to serve an indefinite hospital order starting at Broadmoor Hospital, Mr Justice Stuart-Smith, said to the schizophrenic: ‘What you did was deeply shocking and utterly revolting to anyone in their right mind.’ (Above, police investigators in Mrs Choules’s garden)

The court heard how he took a job with a bespoke gazebo and garden building company which a number of his friends worked for.

‘Neither his housemates nor his old partner noted anything exceptional about his behaviour in the lead-up. There was only one unusual episode, where he went out alone and did not return for eight hours in the middle of the night. He said he’d simply got lost.

‘It was a mutual decision to end the relationship with his ex-girlfriend but his housemates did report that they heard them arguing. The defendant also did not go to the airport when she had her flight out of the UK.

‘The next morning, at 5.30am, the defendant’s housemates knocked on his bedroom door to give him a lift to work, but he was not there. They thought nothing of it and went to work.’

Mrs Choules’s niece read an emotional statement to the court. She said: ‘She would never have given up her cottage for anything in the world. She remained strong till the end. My dear Tina, she will be forever be missed by me and her loving friends in England and back in Italy.’

The officers commended in the case for their bravery when they were first on the scene to confront Naburtas were named as Pc Kevin Coady and Pc Daniel Crisp.

Confirming the indefinite hospital order with a Section 41 Order under the Mental Health Act, Judge Stuart-Smith concluded: ‘The unlawful killing of Ms Choules was a grave offence. You would pose a significant risk if released.

‘Any order of the court must provide proper and effective protection for the public. With the benefit of the expert evidence, I have come to the conclusion that it is neccessary to make not merely a hospital order but also a restriction order under Section 41 without limitation as to time.

‘If it is ever safe for you to be discharged into the community in years to come, it should only be under the closest supervision and monitoring.’