SEBASTIAN SHAKESPEARE: Ex-inmate and Tory Cabinet Minister Jonathan Aitken performs his first every funeral for his Eton friend as he serves as an unpaid prison chaplain

Jonathan Aitken, who served a seven-month stretch for perjury and perverting the course of justice in 1999 but who is now an unpaid prison chaplain, has officiated at his first funeral

Aitken, who served a seven-month stretch for perjury and perverting the course of justice in 1999 but who is now an unpaid prison chaplain, has officiated at his first funeral — not of an old lag but of baronet Sir Toby Clarke, who died last month aged 80. ‘It was my first funeral as a priest,’ the Reverend Jonathan Aitken, 77, who was ordained last year, tells me. ‘It was a moving experience — burying an old friend.’

The church — historic St Mary’s in Bibury, Gloucestershire — was packed out with mourners who knew Aitken as well as they knew the deceased.

Among them were Lord Vestey, newly appointed Lord-in-Waiting to the Queen, and Aitken’s former Cabinet colleague, Lord Heseltine.

In his address, Aitken recalled how he first encountered Clarke on arrival at Eton 63 years ago. ‘His first words to me were: “Aitken, you’re my fag. Please fill up my coal scuttle”.’

This command was not unusual given that Eton lacked central heating at the time, so rooms were warmed by open fires. Aitken’s extraordinary career has embraced stints as war correspondent and biographer of disgraced U.S. President Richard Nixon.

Known as ‘Jono’ by fellow inmates during his time inside, Aitken’s comparatively brief imprisonment was long enough, he subsequently reflected, to discover that ‘cells can be great places to pray’.

On his release, he returned to Oxford,where he read law decades earlier, to take a degree in theology at Wycliffe Hall.

Aitken celebrated his ordination last year by holding a party in the Grand Hall of the Old Bailey and invited friends from the full spectrum of society — from fellow Old Etonians and parliamentarians to ‘blaggers’ (armed robbers) and ‘blowers’ (safe-crackers).

It’s not quite brawny blond Daniel Craig emerging from the ocean in blue shorts — as he did in Casino Royale — but the star’s predecessor as 007, Pierce Brosnan, proves he can still get pulses racing.

The silver fox, who at 66 is 15 years Craig’s senior, took a dip in a lagoon in Reykjavik yesterday wearing black trunks. He has been on holiday in Iceland this week with his wife, film producer Keely, who shared this picture online.

‘Happy times,’ she captioned it. ‘A beautiful man,’ growled one female admirer.

Being a dame can make life complicated, according to the best-selling children’s writer Jacqueline Wilson. ‘I’m proud to have been granted the honour but when I travel abroad a lot of people assume it’s my first name and say: “Hi Dame!” when they meet me,’ laughs the author. ‘It always amuses me.’ 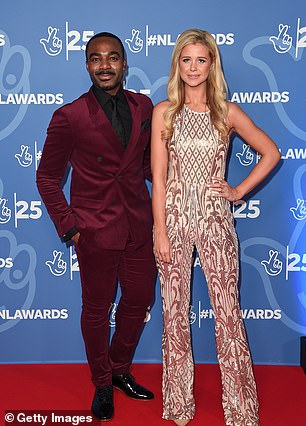 It was where the romance started for Strictly winner Ore Oduba, as he hosted the National Lottery Awards with wife Portia

MEMORY LANE: It was where the romance started for Strictly winner Ore Oduba, as he hosted the National Lottery Awards with wife Portia. ‘It’s really surreal being back, as this is where me and Ore met,’ she gushes at the former BBC Television Centre in West London.

SINGLE LIFE: Lewis star Laurence Fox, ex-husband of actress Billie Piper, has given up on finding a girlfriend. He tells me: ‘I’m not a fan of the dating apps any more, I’ve deleted them. I’m a solid single chap and it’s a very good life. I don’t feel lonely at all.’

SANGUINE: Anneka Rice the second contestant booted off Strictly this year, remains positive. ‘I’m a changed woman. I bought four dresses alone this week. The feminisation of me. I’ve always been a bloke, even with three sons.’

Pink Floyd founder Roger Waters gives today’s young musicians short shrift for being self-obsessed and money-minded. ‘I don’t listen to today’s popular music, but it seems to me from what I have listened to, the main drift for most of the people that call themselves artists is completely narcissistic and consumer-orientated,’ declares the 76-year-old, who is worth £190 million. ‘They don’t touch any real part of their capacity to feel love or joy. That’s how it seems. And I am surprised by that.

‘As for my contemporaries, I am monumentally surprised how scared my fellow musicians are to stick their heads out.’

Why Caprice got her skates on for Dancing On Ice 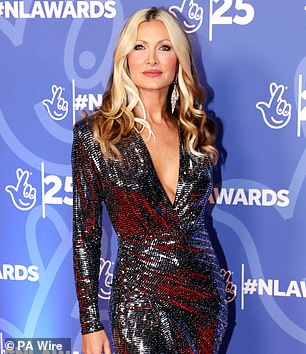 Model Caprice Bourret could not resist the invitation to appear in next year’s TV show Dancing On Ice.

‘When they first asked me I was like, yes, because I’ve been out so long looking after my kids,’ Bourret, who has two children with financier Ty Comfort, tells me.

Caprice, 47, who runs her own fashion and homewares label, most recently appeared on TV on Channel 5’s Celebs On A Farm. She adds: ‘Dancing On Ice is one of the biggest shows on TV. I would be a schmuck if I said no.

‘It’s not like I’m eating kangaroo balls. It’s elegant and beautiful and suitable for someone like me.’

Fancy brightening up the Queen’s palaces? Her Majesty is advertising for an assistant florist. The successful candidate, to be paid up to £24,000 per year, will be based at Buckingham Palace but must be able to travel to royal residences, such as Windsor Castle and Balmoral and Holyroodhouse in Scotland. Roses are said to be the Queen’s favourite and the job ad on the royal website says applicants must be ‘an expert in your field’ and ‘confident, regularly creating a range of floral displays from small table centres and vases through to large pedestal arrangements’.