Trump gets the secretary of state he wants as Senate approves ex-CIA chief Mike Pompeo as U.S.’s chief diplomat in 57-42 vote

The U.S. Senate confirmed Mike Pompeo as President Donald Trump’s secretary of state on Thursday in a 57-42 vote, putting the former CIA director in a pivotal role to handle U.S. foreign policy challenges such as North Korea and Iran.

He is already deeply involved in diplomacy. Trump sent Pompeo to North Korea three weeks ago to meet with the country’s leader, Kim Jong Un, ahead of a summit with the U.S. president to address Pyongyang’s nuclear program.

Senators voted 57-42 in favor of Pompeo, who had faced stiff resistance from Democrats worried about his reputation for hawkishness and past harsh statements about homosexuality and Islam. 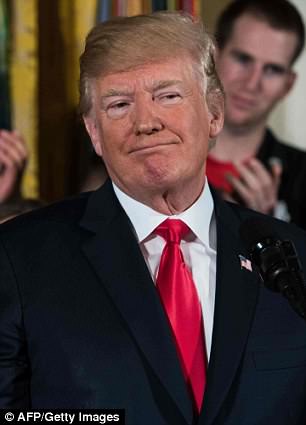 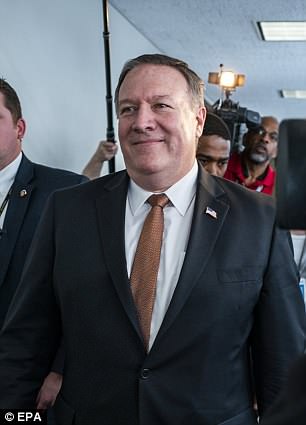 I’m in: Mike Pompeo will lead the State Department after being approved by the Senate 57-42 – giving Donald Trump the secretary of state he wanted 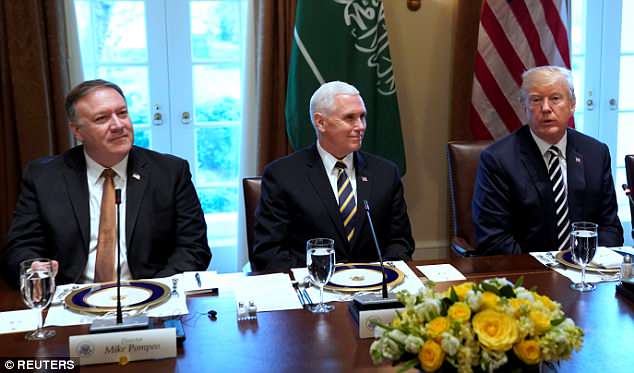 Personal warmth: Mike Pompeo, who was a guest at a White House lunch for Saudi Arabia’s de facto ruler, Crown Prince Mohammed bin Salman, has a personal rapport with the president 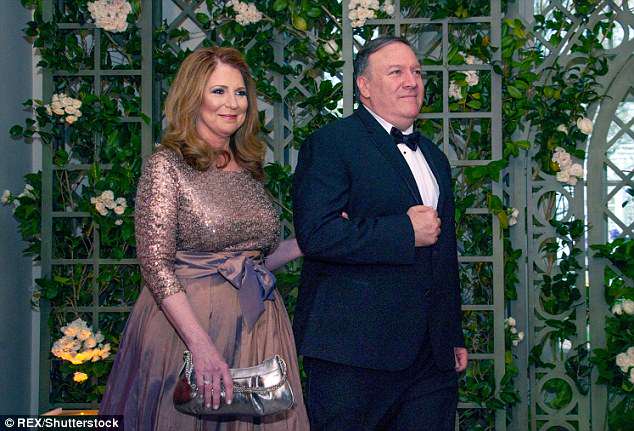 White House invitation: Mike Pompeo and his wife Susan were among the 120 guests at Trump’s state dinner this week for French President Emmanuel Macron and his wife Brigitte

Pompeo will be forced quickly to address a wide array of other international challenges, including long conflicts in Syria, Iraq and Afghanistan, Chinese expansionism in Asia and Russian assertiveness.

Washington is also working with European allies such as French President Emmanuel Macron and German Chancellor Angela Merkel to decide whether to toughen an international nuclear agreement with Iran.

Pompeo, a former Army officer who was a Republican congressman, is regarded as a Trump loyalist with hawkish world views.

He narrowly avoided a historic rebuke by the Senate Foreign Relations Committee that would have made him the first Cabinet nominee in more than 50 years to move forward without a positive recommendation from the panel with jurisdiction.

Pompeo, who became one of Trump’s closest advisers during his 15 months at the CIA, faced stiff opposition from Democrats, who worried he might be too closely aligned with the president.

While in Congress, Pompeo was an outspoken opponent of the Iran nuclear accord.

But he said during his confirmation hearing that he was open to fixing, rather than blowing apart, the pact, which the West believes is key to preventing Iran from getting a nuclear bomb.

Opponents also worried that Pompeo was too hawkish, and said his past remarks about homosexuals and Islam made him unsuitable to represent the United States on the world stage.

U.S. senators said Pompeo was expected to hit the ground running and head off almost immediately to a NATO foreign ministers meeting in Brussels on Friday.

Supporters said Pompeo did well during 15 months leading the CIA, and said the country badly needed a leader at the State Department, where staffing has been slashed with many positions unfilled since Trump became president in January 2017. 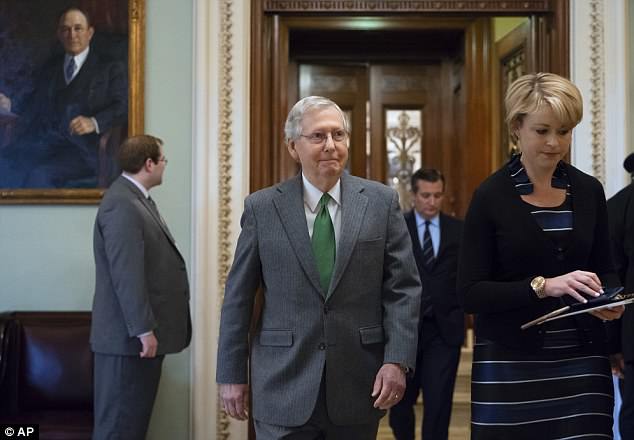 Victory: Mitch McConnell Oversaw the Senate approving the new secretary of state by 57-42

Trump picked the CIA’s deputy director, Gina Haspel, to replace Pompeo as head of the spy agency. If confirmed by the Senate, she would become the first woman to hold the post.

Pompeo avoided being the first nominee for secretary of state ever rejected by the Senate Foreign Relations Committee only when Republican Senator Rand Paul, who had vowed to oppose him, announced his support minutes before the committee voted on Monday after pressure from the party.

None of the 10 Democrats on the 21-member committee supported the nominee.

Senator Robert Menendez, the top Democrat on the foreign relations panel, was a vocal opponent of Pompeo’s confirmation, but said he did not think the bruising confirmation fight would leave Pompeo wounded.

‘He obviously has the president’s support. That will be meaningful to people in the world,’ Menendez said on Wednesday, drawing a contrast with his predecessor, Rex Tillerson, who often seemed to differ from the president.