Baghdad:  An electoral ticket backed by the influential Shiite cleric Muqtada al-Sadr emerged as the early front-runner in Iraq's elections, according to preliminary results released late Sunday, dealing a significant blow to the re-election campaign of Prime Minister Haider al-Abadi.

If the results hold, Sadr, a strident critic of the United States who commands a militia that fought American troops during the occupation of Iraq, could be in pole position to determine Iraq's next leader. Sadr did not run in the election but holds sway over the electoral ticket that has defied predictions by amassing the largest number of votes across 10 of country's 18 provinces. 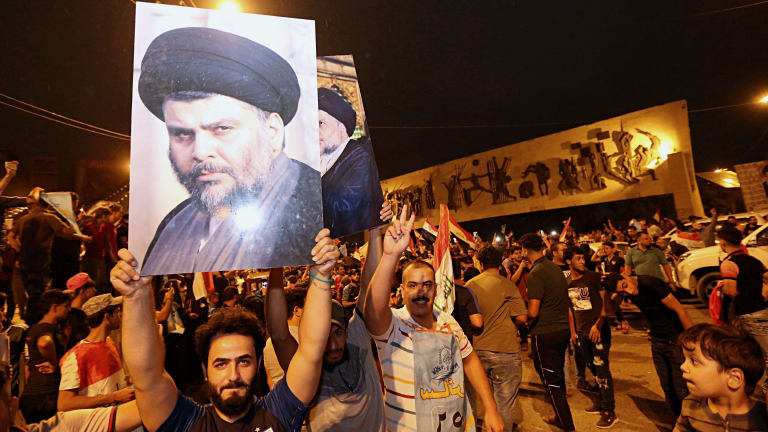 Followers of Shiite cleric Muqtada al-Sadr celebrate in Tahrir Square in Baghdad early on Monday, May 14.

Sadr's coalition, called Sairoon, won by a large margin in the capital, Baghdad, which accounts for the most number of seats in Iraq's 329-seat parliament. A ticket led by the commander of a Shiite militia close to Iran came in second.

Abadi's coalition, which had been forecast to win and was the choice of the United States, came in fifth in the capital and was running third overall, according to the preliminary results.

The final official results are expected later today (Monday), after which a long process of allotting seats in the legislature will begin, followed by members electing a president and a prime minister.

Sadr's surprise early lead sets up the prospect of Iraq's government being headed by someone both hostile to the US and opposed to Iran's spreading influence in the country. Sadr has recently campaigned against corruption and can summon millions into the streets to protest policies he opposes. He surprised Iraqis by forming a cross-sectarian, non-Islamist electoral coalition for Saturday's vote that includes Iraq's communist party. 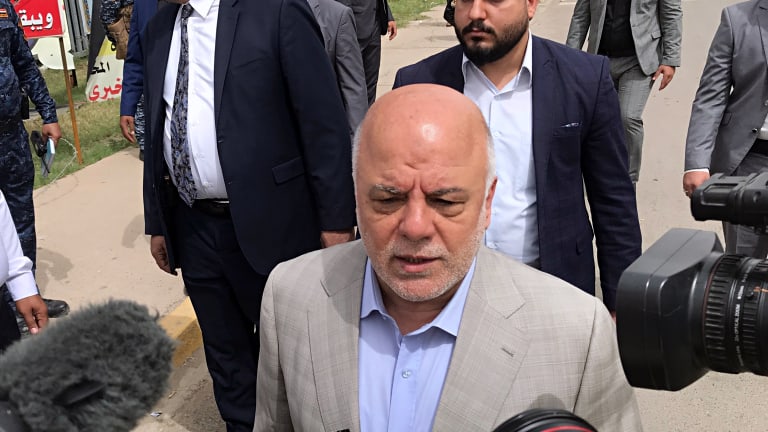 Iraq Prime Minister Haider al-Abadi speaks to reporters after casting his ballot in the country’s parliamentary elections in Baghdad on Saturday.

Before the release of the preliminary results, the conversation on Iraq's airwaves, social media and streets had revolved around the historically low turnout at polling places.

Fewer than 45 per cent of Iraq's 22 million eligible voters turned out for the parliamentary election, held five months after the Islamic State militant group's three-year occupation of major Iraqi cities was ended in a costly and bloody war. The low turnout was at odds with predictions that voters would throng the polls in a harbinger of a new era in Iraqi politics.

The number reflects a steep decline in the rate of Iraqi voter participation, which was 62 per cent in the 2014 and 2010 elections after a peak of 70 per cent in 2005.

Many of those who stayed home said it was an act of protest, not a lack of interest. They cited displeasure with Iraq's complicated election system, which rewards name recognition over political platforms, and a lack of confidence that the same old faces that led the ballot lists would deliver on job opportunities and lasting security. 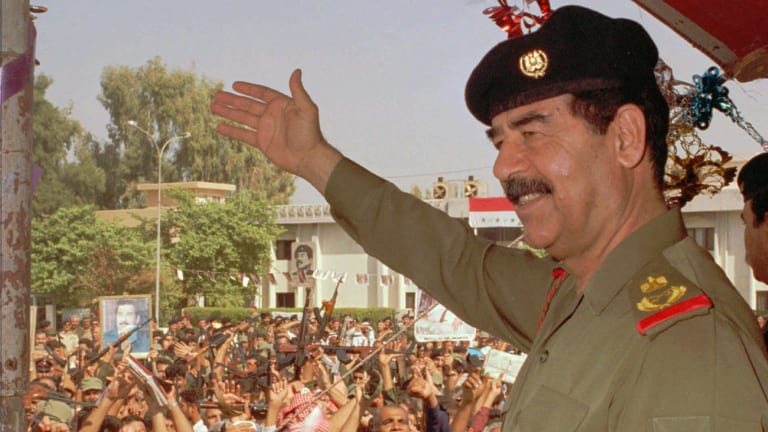 Then Iraqi president Saddam Hussein waves to supporters in Baghdad, Iraq in in 1995.

Others said they hoped their boycott would force a national reckoning over what they regard as a stagnation of Iraq's political and social order in the years since dictator Saddam Hussein was toppled in 2003.

"I participated in all the previous elections, yet there was no change. We demonstrated against the electoral system, but no one listened," said Mustafa Sadoon, a Baghdad-based writer. "I didn't find any other choice to express my rejection except to boycott."

Iraq's government celebrated the election, however, citing the absence of any terrorist attacks at the polling stations and any reports of widespread irregularities or fraud.

Officials administering the vote attributed the low turnout partly to increased security measures and confusion stemming from the first-time use of an electronic voting system.

Several voters in the city of Najaf said in interviews that they were turned away when the biometric voting machines couldn't recognise their fingerprint or for showing up with an old voter ID card.

Boycotters said none of those reasons could account for the sharp decline in participation – which many analysts and Western diplomats had expected to top 60 per cent.

The campaign season was notable for politicians moving toward a centrist message of Iraqi nationalism over sect allegiances, a dramatic departure from the pervasive sectarianism that has defined Iraq's politics since the US-led invasion in 2003.

Even Iraq's traditionally right-wing Shiite parties with close ties to Iran embraced the message of all Iraqis being equal under the law and putting national interests above that of any regional or global power. 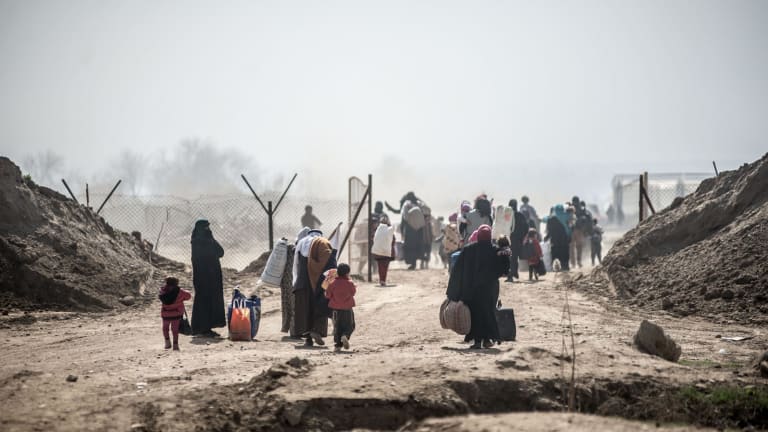 Abadi's December declaration that the Islamic State had been defeated in Iraq had sparked delirious celebrations and pronouncements that Iraq was about to usher in a new era. His electoral ticket campaigned on that theme, hoping the military victory would translate into a political victory.

Waseem Seizeif, a blogger who advocated a large-scale boycott of the election, said the lofty rhetoric masked the absence of what much of the voting public was looking for: a substantive policy debate that addressed the myriad problems that Iraqis face.

"We believe in democracy, but we also believe that if we participated in the elections, it means we approve of this system, which we don't," he said.

Seizeif said the system forces desirable candidates to join party tickets headlined by established figures who rely on name recognition to garner votes – effectively eliminating any opportunity for others to run on a platform of reform.

That forces voters to cast ballots for a headliner politician they may despise as the only way to show support for a candidate they like.

"The whole system is broken," Seizeif said. "Change won't come through ballots. We should pressure them to change the entire system."

Indeed, this election was dominated by established candidates, including a ticket headed by former prime minister Nouri al-Maliki, who was ousted after the 2014 Islamic State blitz of Iraq despite his coalition winning the most votes. Other leading candidates in this election included Abadi and Hadi al-Ameri, head of one of Iraq's largest Shiite militias. A bloc backed Sadr, who rose to prominence opposing US forces from 2003 to 2011, is also expected to do well.

Sadoon said that he knew of several "clean" candidates he wished he could have voted for but that they had joined "corrupt blocs".

"That means my vote will help the thief who is heading this bloc, and I can't be party to this," he said.

Ahead of the election, even Iraq's top Shiite cleric, Grand Ayatollah Ali Sistani, signalled displeasure with the field of candidates, instructing followers not to support any hopeful who has failed the country in the past.

In a departure from his stance during previous contests, when he urged all Iraqis to vote, Sistani also said that there was no religious obligation to participate.

As candidates awaited the official results, some reflected on the unenthusiastic turnout.

One prominent candidate from the ticket headed by Ameri, Karim al-Nouri, joked that more people participated in the rapid dismantling of election billboards for scrap metal than in the election.

But he added a serious note, saying the low turnout was a warning to the political class.

"It's an alarm," he wrote in a Facebook post. "It's a reaction to the corruption since 2003 and it means that the government must reconsider the political approach."