Shocking video shows the moment a teacher bodyslams a student

Shocking moment a teacher violently body slams a pupil who punched him in the face onto a desk, launching a fist fight that is broken up by students

Shocking video reveals the moment a teacher body slams a student onto a desk in the middle of the classroom.

The violent altercation took place after the student challenged the teacher by bumping into his chest.

In the harrowing 30 second clip the teacher, standing at the front of the classroom that appears to be in the US, aggressively pushes the pupil back, inciting a bitter fist fight. 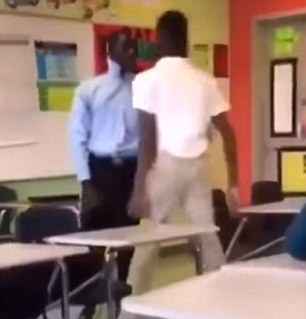 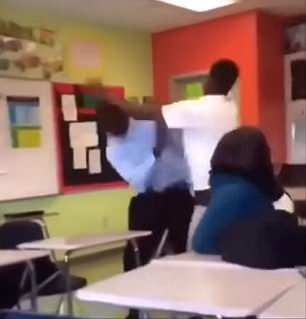 Fist fight: A teacher, pictured in blue, threw his student, in white, onto a desk after the pupil charged at him and punched him in the face 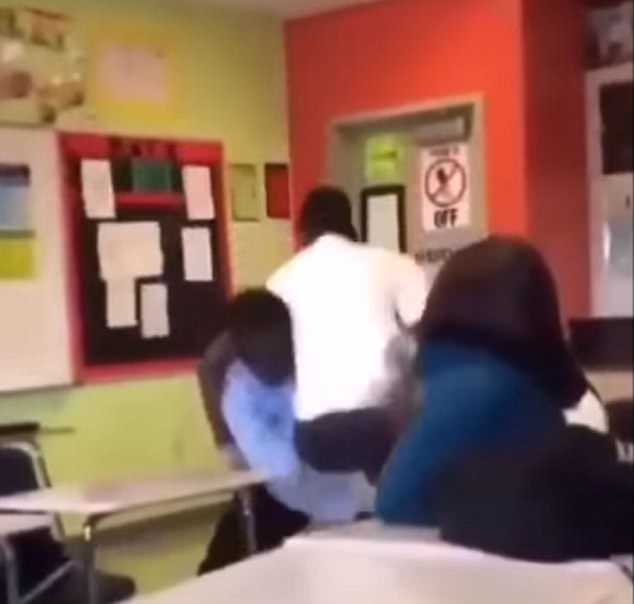 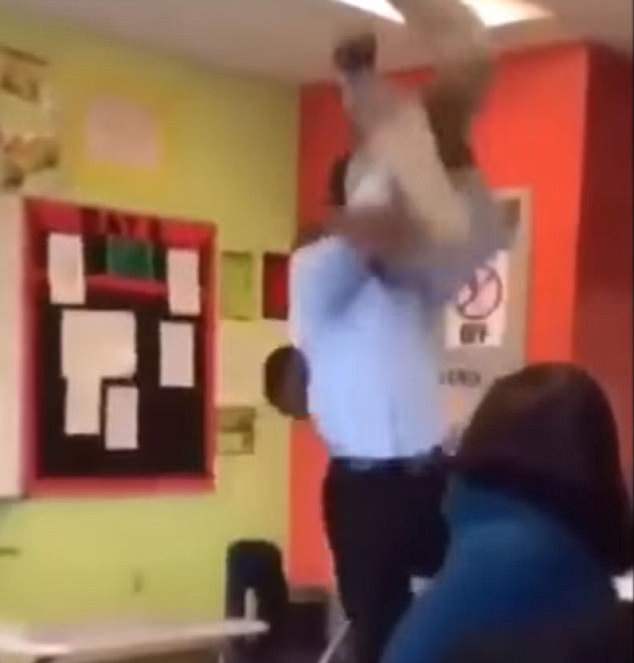 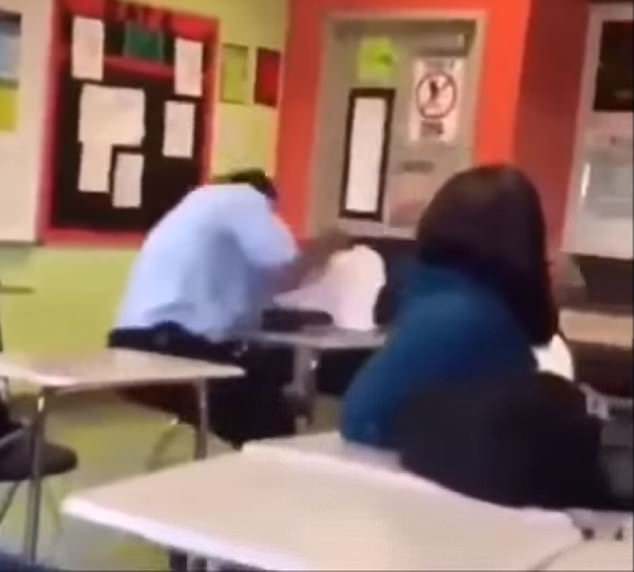 The student, in white, is seen sideways crashing on top of the desk after the body slam

The student buckles back and retaliates by swinging a punch at the teacher’s face.

The male teacher, wearing a blue shirt, then picks up the student, turns him upside-down, and viciously body slams him on a nearby desk.

The students at their desks yelp as they watched the scene unfold as two male pupils come forward to tear the two apart from each other as they continue to swing punches.

After the body slam the teacher continues to charge at the student as he clambers on the ground.

A student then holds the teacher, creating a human barrier between him and the punching student, who rises and punches the teacher yet again. 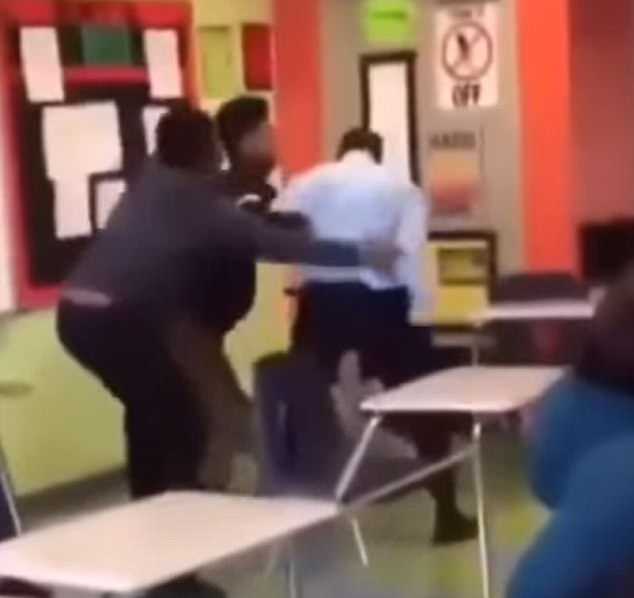 Students then intervened, two grabbing the teacher from behind to pull him away 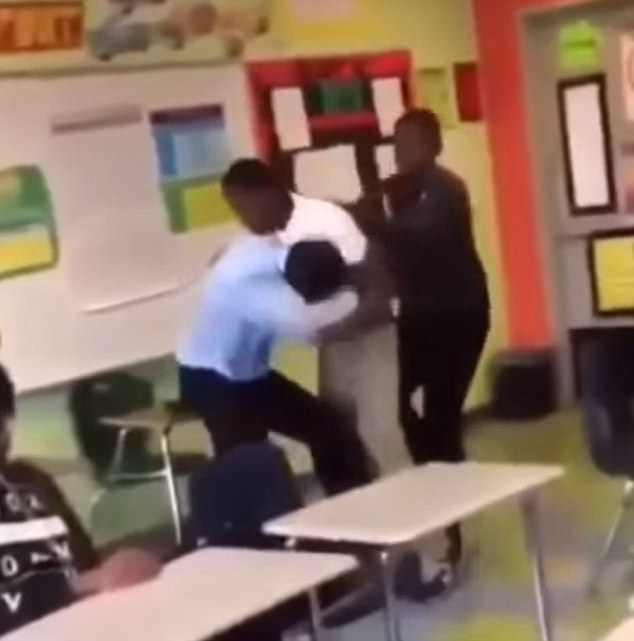 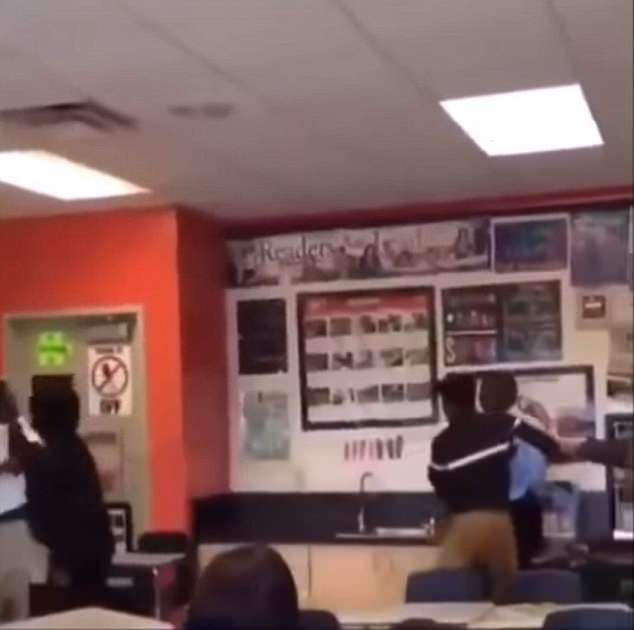 The altercation was quelled when a tall student separated the two. It is not clear when or where the fight took place

Another student steps in to push the teacher to the other side of the classroom.

When the teacher calmly tries to re-approach the student, pinned to the wall by two of his peers, a very tall student comes in to block his way.

All the while students are screeching and screaming in the background of the video making the shouts of the teacher and the student unintelligible.

The video ends with the two cornered to different sides of the room.

The video was first posted on July 31, 2017 but has come back to light after it was shared on World Star Hip Hop on Thursday.

It is not clear who the people in the video are nor where the classroom brawl took place.