Seoul:  South Korea halted anti-Pyongyang propaganda broadcasts across the rivals' tense border on Monday days before their leaders are to sit down for talks expected to focus on the North's nuclear program. 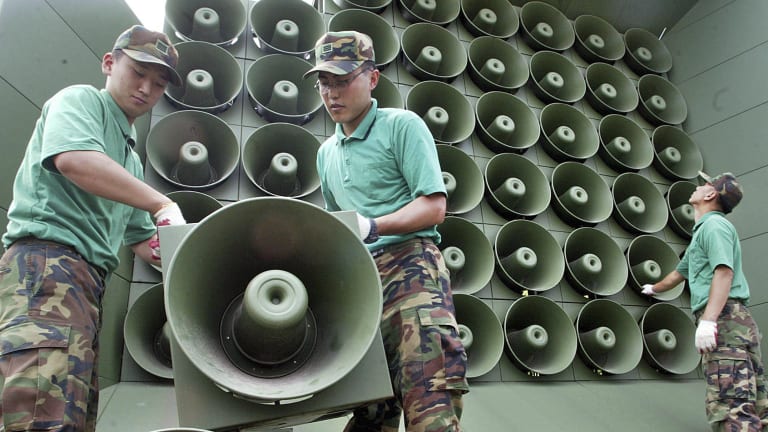 Seoul had blasted propaganda messages and K-pop songs from border loudspeakers since the North's fourth nuclear test in early 2016. Pyongyang quickly matched Seoul's campaign with its own border broadcasts and launches of balloons carrying anti-South leaflets across the border.

South Korea, however, turned off its broadcasts to try to ease military tensions and establish an environment for peaceful talks, Seoul's Defence Ministry said in a statement.

The move came amid a recent thaw of animosities, with North Korean leader Kim Jong-un trying to reach out to Seoul and Washington in recent months after conducting his country's sixth and most powerful nuclear test and three long-range missile test launches last year.

Kim and South Korean President Moon Jae-in are to meet at a border village on Friday in the rivals' third-ever summit talks. Kim is to hold separate summit talks with President Donald Trump in May or early June in what would be the first North Korea-US summit talks. 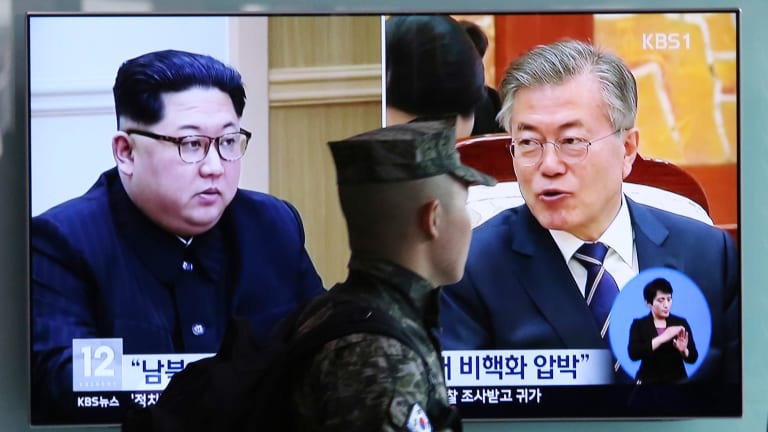 Kim has said he was willing to place his nuclear program up for negotiations. But it was unclear how serious disarmament steps he would offer during the two sets of the summit talks. US officials have said they want to the North to take complete disarmament measures.

North Korea said on Saturday it would close its nuclear testing facility and suspend nuclear and intercontinental ballistic missile tests. But the country stopped short of suggesting it has any intention of giving up its nuclear weapons or scale back its production of missiles and their related component parts.

Trump nonetheless tweeted on Sunday that the North has "agreed to denuclearization (so great for World), site closure, & no more testing!"

Trump's pick to be the next secretary of state, CIA Director Mike Pompeo, travelled to North Korea on the Easter weekend to lay the groundwork for the meeting. Pompeo's trip was a clear indication that preparations for the North-US summit were under way though many US and other foreign experts had doubts.

Trump also disputed any suggestion that he had made too many concessions at the outset of an unpredictable and potentially volatile diplomatic exercise.

From his Florida estate, Trump took to Twitter to criticise Chuck Todd, host of "Meet the Press," who questioned on that program and an earlier broadcast whether the president had received anything in return for the "huge gift" he had given  Kim, by agreeing to meet with him.

Experts inside and outside the US government believe that Kim's ultimate goal is to have his country recognised as a nuclear power even as he offers enough concessions — some potentially largely symbolic — to press the United States into easing crippling economic sanctions.

Analysts who study North Korea's diplomatic patterns say there is cause for concern over Kim's overtures, given his murky motives and his apparent effort to use the concessions to try to achieve the upper hand in the negotiation process.

North Korea has a long history of not abiding by promises to curtail its nuclear program, and Todd on his program reflected scepticism among former and some current White House officials that Kim will actually follow through on any vow to dismantle the North's primary nuclear test site or stop nuclear weapons testing.

Some officials worry that Trump may be so eager to reach a historic deal that he will be lured into an agreement that falls short of the denuclearisation of the Korean Peninsula that global powers have demanded.