Golfing legend Jack Nicklaus has become one of the first people in the world to have ground-breaking stem cell therapy on his back.

The treatment has allowed the champion, who won 18 Major championships, to swing a golf club again without pain.

The 78-year-old, nicknamed the Golden Bear, had to withdraw from two tournaments because of his back pain, which he had suffered since childhood. He was forced to have regular cortisone injections throughout his golf career.

But a 90-minute procedure which saw stem cells removed from his abdomen and inserted into his lower back had him back on the golf course within a week, pain-free.

The experts behind the treatment, which costs just £30, are confident the rapid procedure will be widely available within the next five years.

The US golfer had his first procedure in March 2016, carried out by Dr Eckhard Alt, professor at the Technical University of Munich. He will return to Germany this week to have stem cells injected into his shoulder.

He told the conference: ‘Other doctors I talked to said it would be six months of this, four months of that. I went in and had the fat taken, an hour later I went back in. I played golf the next week and I thought, “This is pretty good.”

‘I wish I had met Eckhard about 20 years earlier. I’m a believer. I’ve had nice results. People ask me about it and I say you better get an airplane to Munich.’ 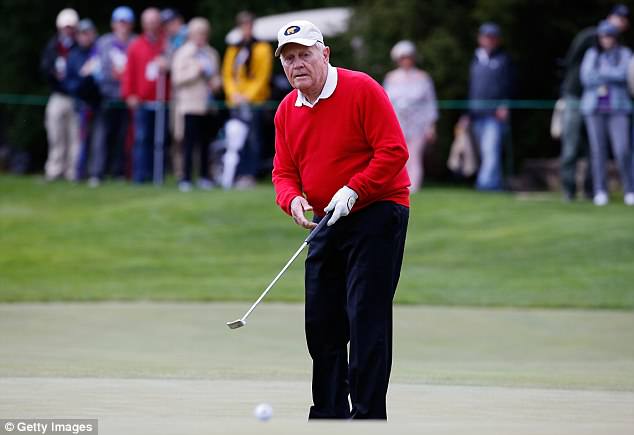 The golfing legend, 78, was first treated in March 2016 in Munich and said he ‘wishes he had it 20 years earlier’

Mr Nicklaus was among the first to try the £30 stem cell therapy and his son Gary has also undergone the same operation.

Speaking about the upcoming treatment, he told the Telegraph: ‘I feel better than I did but my right shoulder is not performing too well and I like to fly fish and play tennis so it would be great if I could lift the arm higher and without pain.

The treatment was developed by Sanford Health[javascript:void(0);], the largest not-for-profit rural healthcare company in the US.

It works by taking 100ml to 200 ml of fat tissue from the patient’s abdomen, and spinning it in a centrifuge with a special enzyme mixture made from a substance produced by e.coli, which separates the stem cells.

A person’s own stem cells will not be rejected by their immune system and can become any cell in the body.

Dr Alt said: ‘In the past if we had a failing organ or function we replace it with an artificial implant, an knee prostheses, a hip prostheses.

‘But I felt 15 years ago that the next generation of medicine would be the self-healing like in animals which can regenerate organs, so there must be some power to regenerate ourselves.

‘We found that stem cells are sitting in each organ in the blood vessels as a reserve army.’