Please moo out of my way! Stray cow wanders into lecture hall at Indian university as bewildered students look on in horror and dash out of its way

A video of a stray cow entering a university classroom mid-lecture has gone viral on social media.

Footage shows bewildered students staring at the animal as it wanders around the Indian Institute of Technology’s (IIT) Mumbai campus in Maharashtra’s Powai city on Saturday.

The cow is seen entering through the door and casually strolling around while students leap out of its way.

It even starts to climb up the steps in the auditorium, prompting even more students to back out of its way.

Students said it was raining heavily at the time so assumed the cow had come in to keep dry, according to local media reports.

However, authorities have said they are still looking into the matter. 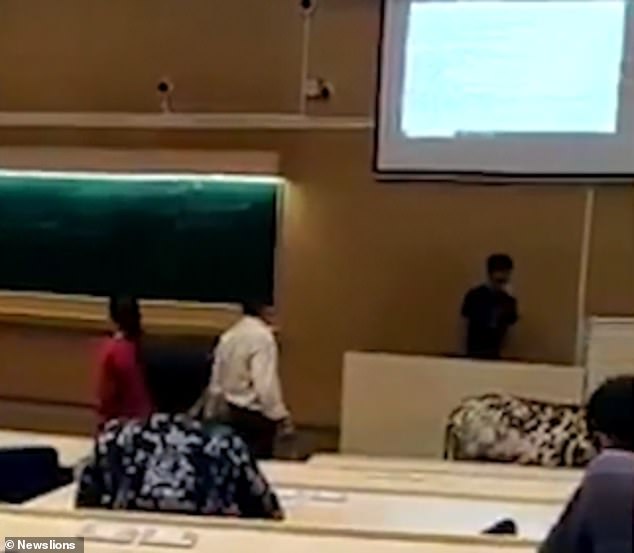 It even starts to climb up the steps in the auditorium, prompting even more students to back out of its way

The incident comes a fortnight after a student was attacked by a pair of bulls outside the IIT Mumbai campus.

Concerns have been raised about the danger created by stray cattle and other animals inside the campus.

And students have even reported that animals often stray into their hostel rooms and academic buildings.