Swiss aristocrat sues her dead banker husband’s lover for return of £2.2million share of Belgravia mansion that he sold two weeks before he died

A Swiss aristocrat and her dead husband’s lover are locked in a bitter court feud over a £2.2million cash pot and his collection of clocks and paintings.

He died without making a valid will, meaning that Mme De Muller and Mr Kahrmann’s four children, now stand to inherit his estate.

Mme De Muller, who was separated from the financier for ‘many years’ before he died, the High Court was told.

Hilary Harrison-Morgan (left) picked up a cheque for £2.2million from the sale of the property in Belgravia, west London, but Christiane De Mulller, (right) is suing her for return of the cash 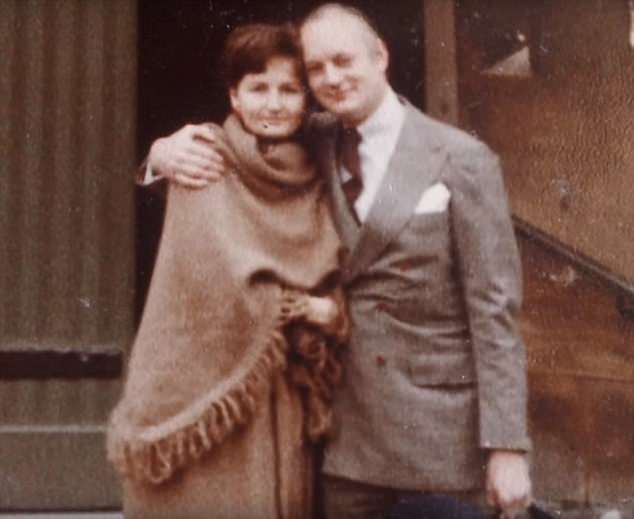 Christiane De Muller with her financier husband, Rainer Kahrmann, in 1982. The High Court heard the couple had been separated for ‘many years’ before he died

Mr Kahrmann’s partner after the breakdown of his marriage, Hilary Harrison-Morgan, picked up a £2.2m cheque from the sale of property he owned in Belgravia, West London.

Mrs Harrison-Morgan, the mother of Mr Kahrmann’s twin sons, Fred and Max, is now being sued by his widow for return of the cash.

Mme De Muller, who part owns a chateau in Switzerland, is suing alongside her grown-up daughter, Alice Kahrmann, 36, on behalf of her dead husband’s estate.

Also in dispute are a number of items, including paintings and a grandfather clock – which Mme De Muller claims Mrs Harrison-Morgan has clung onto since Mr Kahrmann’s death.

Mr Kahrmann, a highly successful investment banker, died aged 71, and had lived in London until 2003, but returned to his native Germany over financial pressures.

He was also an expert on clocks and a member of the Royal Horological Society.

He and Mrs Harrison-Morgan once lived together in a two-storey maisonette, in Belgravia, west London, and raised their sons there.

The court battle concerns a ‘highly complex’ transaction carried out less than two weeks after Mr Kahrmann’s death – involving the sale of the Belgravia Home and an adjoining property.

Both properties were partly owned by Mr Kahrmann, and the sale of his stakes in them generated a profit of £4.4m. 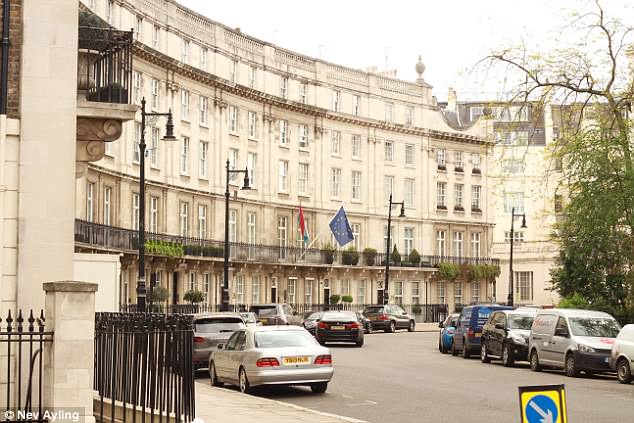 The centre of the dispute involves a property in Wilton Crescent, Belgravia (pictured)

Of that total, £2.2m was received by Mrs Harrison-Morgan, while the remaining £2.2m has since flowed back into Mr Kahrmann’s estate, the court heard.

But Mme De Muller’s lawyers now argue that the cash was ‘wrongly paid’ to her husband’s ex-partner and she is obliged to refund every penny to the estate.

Mrs Harrison-Morgan’s 17-year-old sons both stand to inherit from Mr Kahrmann’s estate – as do Mme De Muller and her daughters, Alice and Louise.

But Mrs Harrison-Morgan, 59, ‘has received nothing’ and claims she is entitled to hold onto the £2.2m, said her lawyer Clifford Darton.

Alice Kahrmann, told the court she had been unhappy with the way the sale was carried through, and had visited a lawyer to raise her concerns

She argues that she and Mr Kahrmann enjoyed a ‘loving relationship’ and that he would have wanted her to be provided for.

Mr Kahrmann had pledged to her that she would have a share in the properties to reflect their close bond, she claims.

Ulick Staunton, for Mme De Muller, says the evidence shows that ‘the deceased did not have a good relationship’ with Mrs Harrison-Morgan.

But she told Judge Richard Hacon: ‘Rainer fully intended to make sure that myself and the boys were looked after from the proceeds of sale.

‘There’s absolutely no doubt in my mind that that is what he intended.’

Asserting rights both as a sitting tenant and a common law wife, she also pointed out that she lived in the Wilton Crescent flat for over 20 years.

She played a key role in arranging the sale of the properties and the transactions would have stalled had she refused to vacate, the court heard.

‘I would never have left that house or signed anything without expecting to be paid,’ she told the court.

‘I was paid to get out, it was really simple….I was expecting £3m,’ she added.

When Mr Kahrmann relocated to Germany, he carted off many of his possessions in a van, telling her that ‘everything that’s left is yours’, she claimed.

Those items included paintings and a grandfather clock, she explained, adding that many of the objects he left behind had been gifts to her from Mr Kahrmann.

She did not even want some of the items, she insisted, telling the judge: ‘I have nowhere to put them’.

Mme De Muller was not present during the hearing, but the court heard evidence from her daughters, Louise, 38, and Alice, 36.

The sisters initially received £2.2m following the Wilton Crescent sale, but later transferred that sum to their father’s estate.

Alice Kahrmann told the court she had been unhappy with the way the sale was carried through, and had visited a lawyer to raise her concerns.

Neither she nor her sister have ‘received a penny’ from their father, she added, and they have transferred their interest in his estate to their mother.

The civil trial, in front of Judge Hacon, continues.