When the pandemic hit in March and Melbourne went into lockdown, Melis Layik lost all three of her casual jobs.

Luckily for the law and global studies student, she was among 339,000 Australian recipients of the Youth Allowance who got a special $550 fortnightly coronavirus supplement. Another 1.3 million Australians on JobSeeker got the $550 supplement too. 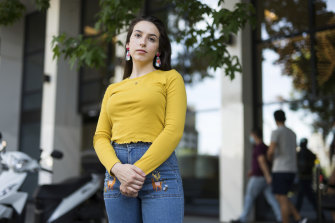 But the second-year Monash University student said since then little had changed for her in the employment market.

"I haven’t really seen much of anything come up," said the 21-year-old, who until March worked for two medical companies, helping with training for medical students, and as an English tutor. She is still looking for work.

Despite there being little change for many on government payments, the supplement was cut to $250 a fortnight in September.

For the past three months Ms Layik has received $630 a fortnight, including the supplement. From next week, her income will drop substantially, with the Morrison government cutting the supplement by $100 to $150.

Ms Layik said it had become difficult to make ends meet when the supplement fell in September. She had to rely on money from her parents to live – her youth allowance covers the rent on an apartment in Southbank. "I have friends who don’t have that privilege and struggle even more," she said.

Conny Lenneberg, executive director of the Brotherhood of St Laurence, said the government’s second round of cuts to benefits would be devastating for those struggling as a direct result of the pandemic.

"We’ve still got incredibly high unemployment levels," she said. "The under-25s are facing a 15½ per cent unemployment rate. And there is extremely high underemployment. It’s particularly difficult for young women, but women as a whole. So to cut [the supplement again] at this stage seems wantonly cruel."

She said the jobs that were coming back were "highly insecure, casualised and part-time".

Youth Affairs Council Victoria chief executive Katherine Ellis said youth employment was always the last to recover from an economic crisis, and it was likely to be the case again this time.

"It hadn't even recovered from the 2008 global financial crisis, so Victoria needs to act now or youth unemployment will remain high for at least another decade," she said, noting 20,000 new employees were preparing to enter the jobs market.

Ms Layik is set to graduate from Monash University in 2022 and is worried she won’t secure a full-time job during a recession. She wants to work in the women’s rights sector.

"The sector is generally underfunded, so I’m not sure how it will be when I graduate."

She also worries that the work experiences that would otherwise have set her apart from her competitors have dried up. Before the pandemic hit, she volunteered at Queerspace and the Centre for Multicultural Youth and was an intern with the International Women’s Development Agency.

However, she recently received an encouraging update. "One of my employers said that there would likely be more work in the new year."