Washington: Weighing withdrawal from the Iran nuclear deal, President Donald Trump declared on Tuesday that if the Iranians "restart their nuclear program, they will have bigger problems than they've ever had before".

Trump issued his warning alongside French President Emmanuel Macron in the Oval Office, where the two allies were meeting to discuss the multinational nuclear accord, the war in Syria and other issues during a day of meetings at the White House. It will be followed by a state dinner, the first one held by Trump and his wife Melania.

In a lighter moment, Trump and Macron demonstrated some of the chemistry that has marked their relationship. The US President brushed something off Macron's suit jacket, saying: "We have a very special relationship, in fact I'll get that little piece of dandruff off". Trump added: "We have to make him perfect – he is perfect". 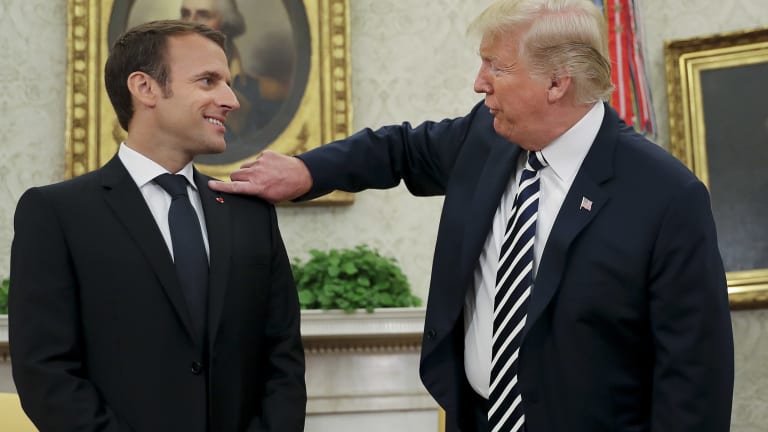 The pair shook hands several times during public appearances, including an awkward handshake that morphed into a hug and a kiss on the cheek.

Trump also informed Macron and his TV audience that North Korean leader Kim Jong Un wanted to meet "as soon as possible". The President, who once derided Kim as "Little Rocket Man", said the North Korean dictator had been "very open" and "very honourable" so far.

Macron told Trump that together the US and France would defeat terrorism, curtail weapons of mass destruction in North Korea and Iran and act together on behalf of the planet, a reference to Macron's work to revive a US role in the Paris climate accord. 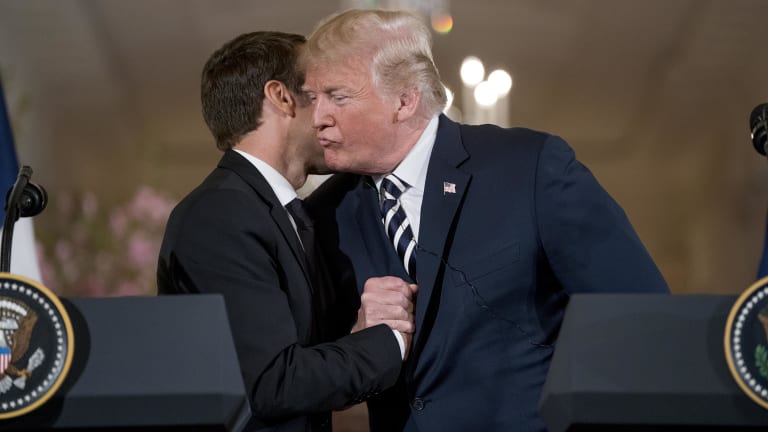 The pair had several handshakes including an awkward shake that turned into a hug.

As for Iran, Trump was asked if might be willing to stay in the accord. He replied: "People know my views on the Iran deal… It's insane, it's ridiculous. It should have never been made."

One of Macron's main objectives during his three-day visit to Washington is to persuade Trump to stay in the accord. Trump remains publicly undecided but reminded his French counterpart of what he sees as flaws in the agreement, which he said fails to address ballistic missiles or Iran's activities in Yemen or Syria.

Macron told reporters that he and Trump would look at the Iran deal "in a wider regional context," taking into account the situation in Syria. "We have a common objective, we want to make sure there's no escalation and no nuclear proliferation in the region. We now need to find the right path forward," Macron said. 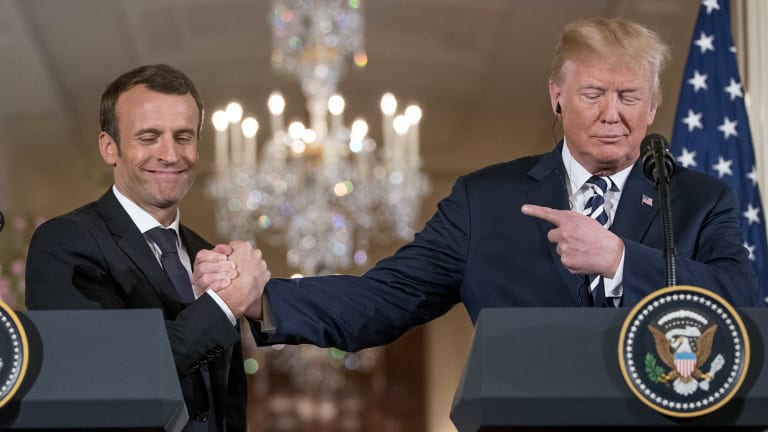 French President Emmanuel Macron is attempting to get President Donald Trump to stay in the Iran nuclear accord.

Macron said that four issues needed to be addressed if a new accord is forged including blocking any Iranian nuclear activity until 2025, putting an end to Iranian ballistic missile activity and finding a political solution to contain Iran in the region.

In a significant shift from his previous comments, Trump suggested he was open to "doing something" on the Iran agreement as long as it was done "strongly". He told Macron: "We could have at least an agreement among ourselves very quickly". But when he was asked by reporters what that agreement would be, Trump said: "You'll find out".

Domestic concerns were also near the surface for Trump. He refused to answer a reporter's question as to whether he is considering a pardon for his personal lawyer, Michael Cohen, whose office was raided by the FBI. Trump called it "a stupid question". Cohen has not been charged in the case. 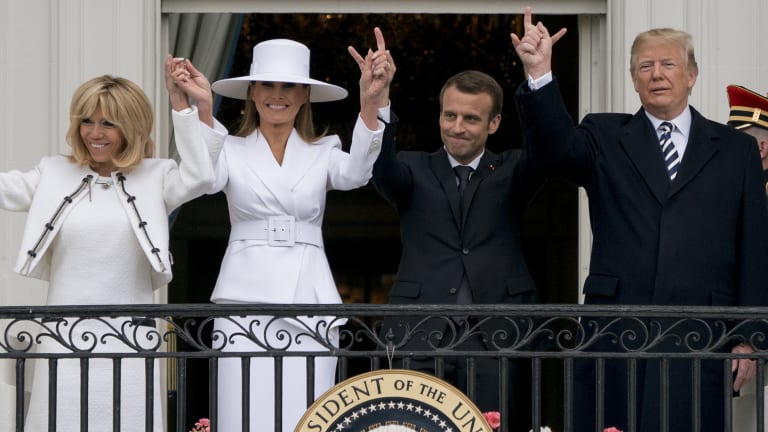 Trump and Macron, with their wives Melania Trump and Brigitte Macron, wave from the Truman Balcony during a State Arrival ceremony on the South Lawn.

The meetings followed a pomp-filled welcome ceremony on the South Lawn. Trump said before an audience of US soldiers and members of his Cabinet that the relationship he forged with Macron at the start of his presidency was a testament to the "enduring friendship that binds our two nations". He thanked the French leader for his "steadfast partnership" in the recent missile strike in response to the chemical attack in Syria.

Macron said: "History is calling us. It is urging our people to find the fortitude that has guided us in the most difficult of times. France and with it, Europe, and the United States have an appointment with history."

The social highlight of Macron's visit, the first state visit of the Trump presidency, comes on Tuesday night with a lavish state dinner at the White House. About 150 guests are expected to dine on rack of lamb and nectarine tart and enjoy an after-dinner performance by the Washington National Opera. On Monday night, the leaders took a helicopter tour of Washington landmarks and had dinner at the Potomac River home of George Washington in Mount Vernon, Virginia. 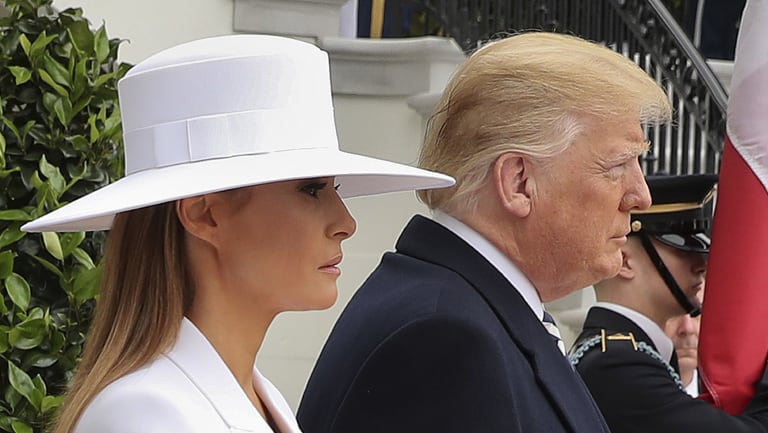 The state visit and dinner is the first state dinner being hosted by President Donald Trump and first lady Melania.

Tuesday's meetings follow the collaboration by the US, France and Britain in missile strikes in Syria earlier this month to respond to the alleged chemical weapons attack. The US has 2,000 troops in Syria assisting local Arab and Kurdish fighters against IS, though Trump has resisted a deeper US involvement and is eager to withdraw completely from Syria.

Macron's three-day visit to Washington underscores the importance that both sides attach to the relationship: Macron, who calls Trump often, has emerged as something of a "Trump whisperer" at a time when the American President's relationships with other European leaders are more strained. Trump, who attaches great importance to the optics of pageantry and ceremony, chose to honour Macron with the first state visit of his administration as he woos the French president.

For all their camaraderie, Macron and Trump disagree on some fundamental issues, including the multinational nuclear deal, which is aimed at restricting Iran's development of nuclear weapons. Trump, sceptical of the pact's effectiveness, has been eager to pull out as a May 12 deadline nears. Macron says he is not satisfied with the situation in Iran and thinks the agreement is imperfect, but he has argued for the US sticking with the deal on the grounds that there is not yet a "Plan B".

Trump ended his first year in office without receiving a foreign leader on a state visit, the first president in nearly 100 years to fail to do so. He was Macron's guest last July at the annual Bastille Day military parade in the centre of Paris. Macron and his wife also took Trump and first lady Melania Trump on a tour of Napoleon's tomb and whisked them up in the Eiffel Tower for dinner overlooking the City of Light.

Macron was welcomed back to the White House on Tuesday with a traditional arrival ceremony featuring nearly 500 members of the US military and a booming 21-gun salute. He was also attending a State Department lunch hosted by Vice President Mike Pence.