This is the chilling moment the UK’s first female suicide bomb plotter tells police during an interview she was planning a Sri Lanka-style terror attack on St Paul’s Cathedral as she is jailed for 14 years.

Wearing a black hijab, Safiyya Shaikh, 36, from Hayes, West London, smiled and raised her index finger in a salute associated with ISIS as she was taken to the cells.

She was addicted to heroin but said she always wanted to ‘do something big’ and that killing one infidel was ‘not enough for me.’

After setting off the two bombs, she wanted to blow herself up on the London Underground, it can be disclosed. 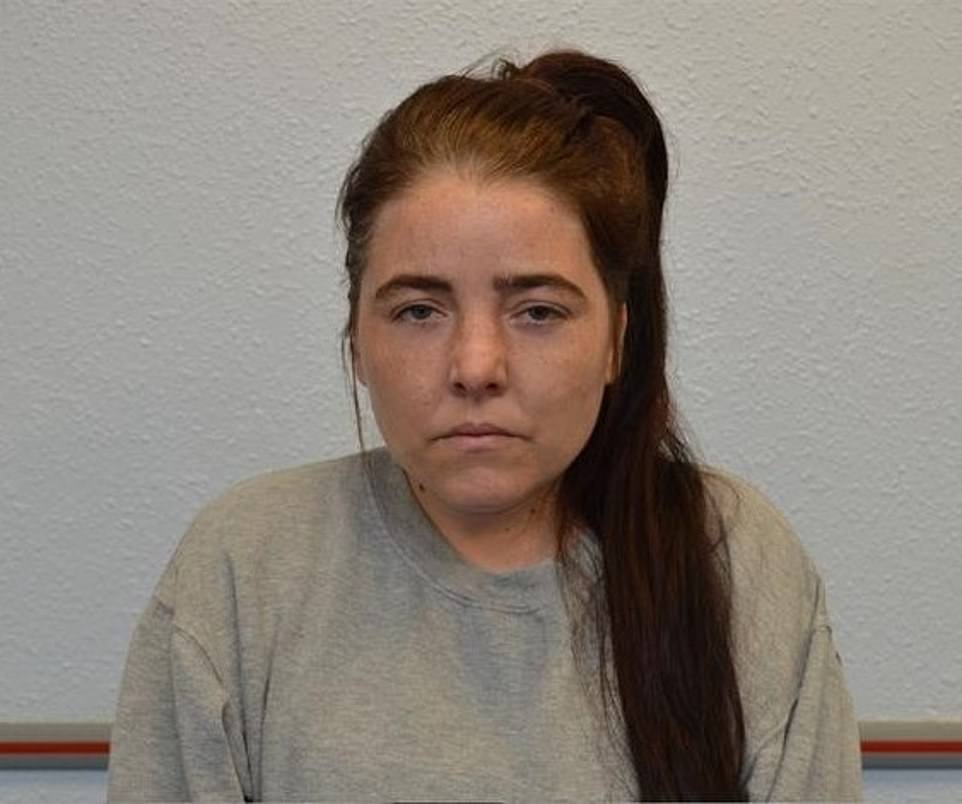 Safiyya Shaikh, 36, a mother of one, from Hayes, West London, wanted to attack St Paul’s Cathedral and a central London hotel during Easter celebrations 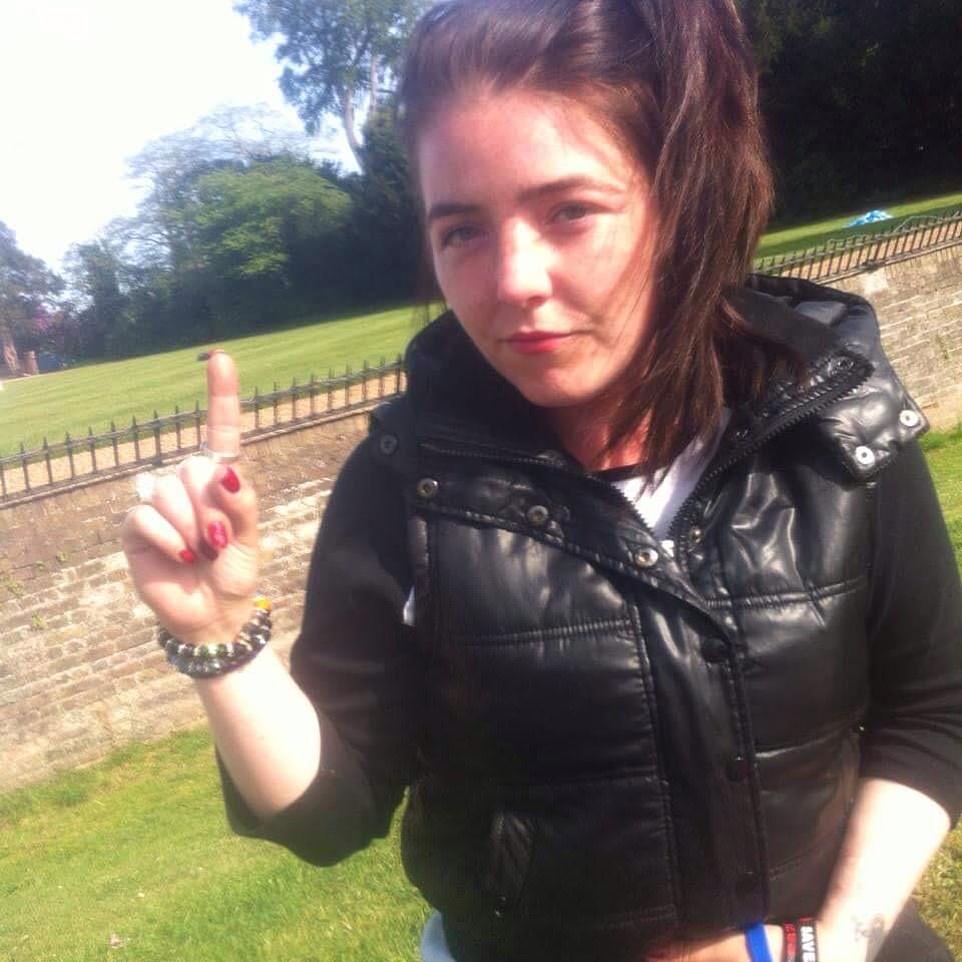 Shaikh (pictured giving the Islamic State salute) had told a friend in a prison call that she had not carried out the terror attack because she was ‘too stoned’, the court was told 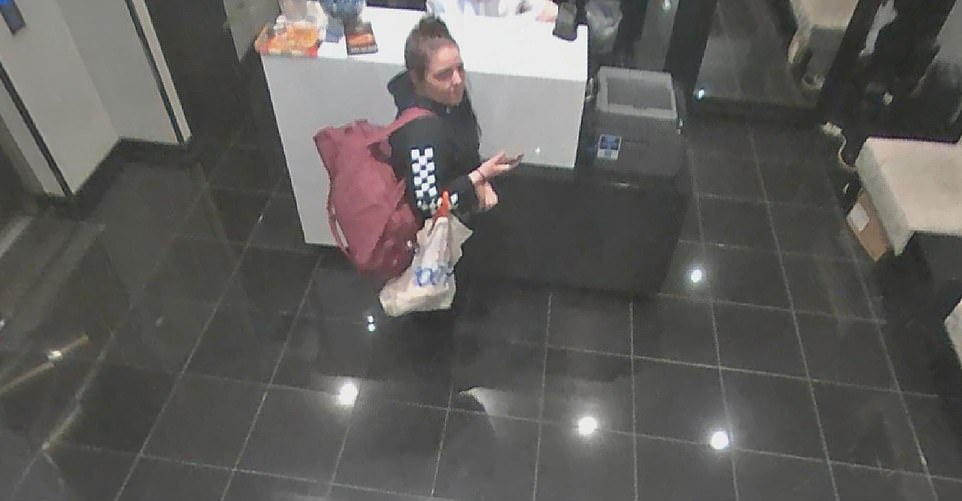 A CCTV still of Shaikh in the lobby at Great St Helen’s Hotel, near the Gherkin office block in the City of London, on September 7, the night before her reconnaissance

Shaikh told an undercover officer: ‘So this is really what I want but I would like to kill a lot brother. Until I’m killed. This is what I really want. Bi’idnillah [god permitting].

‘I am ready for jannah [paradise] but I want to do big things, insha’Allah [god willing].’

Shaikh shared images of Charles and Diana’s wedding at the St Paul’s and wrote: ‘If I had choice I blow the church to ground. With kuffar in it,’ adding a laughing emoji.

‘I want start planning. I am serious about this,’ she added. ‘It not only words akhi [brother] I want action and revenge deep from my heart.’

Shaikh was inspired by the Sri Lanka bombings on Easter Day last year which killed 259 people and wanted to strike when the cathedral was full.

Alison Morgan QC, prosecuting, described her as a ‘violent extremist’ who had pledged her support for ISIS in a written oath on pink note paper.

Shaikh ‘gave the impression she was ready, in fact desperate, to launch an attack,’ Ms Morgan said.

Jailing her for life, with a minimum of 14 years, the judge, Mr Justice Sweeney, said she sought to encourage lone wolf attacks and had become ‘determined to carry out terrorists acts of your own in this country.’ 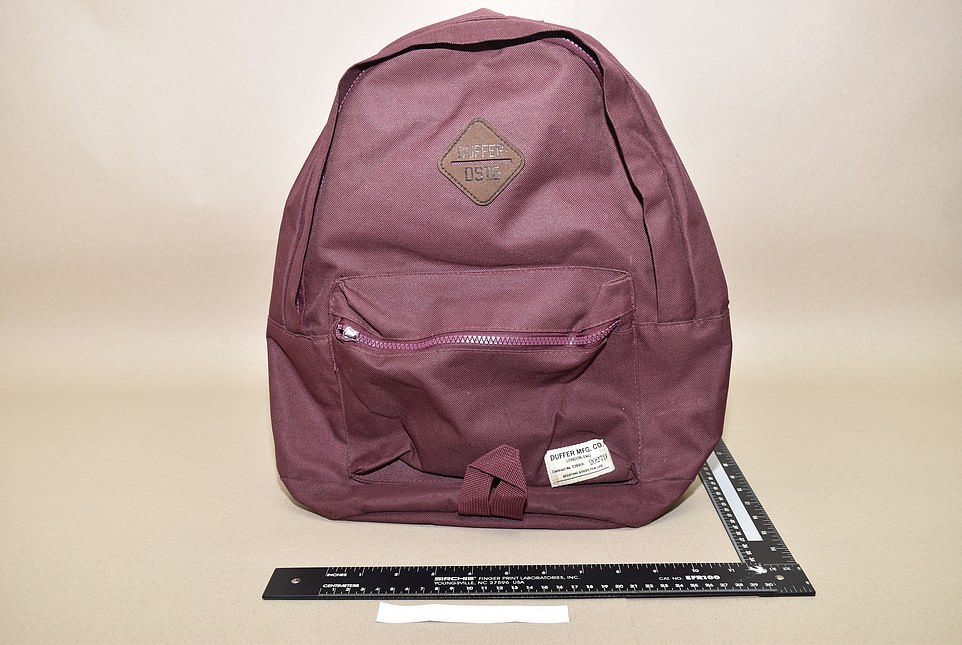 Pictured: Shaikh’s ‘girly’ backpack which was to be filled with explosives ahead of her attack 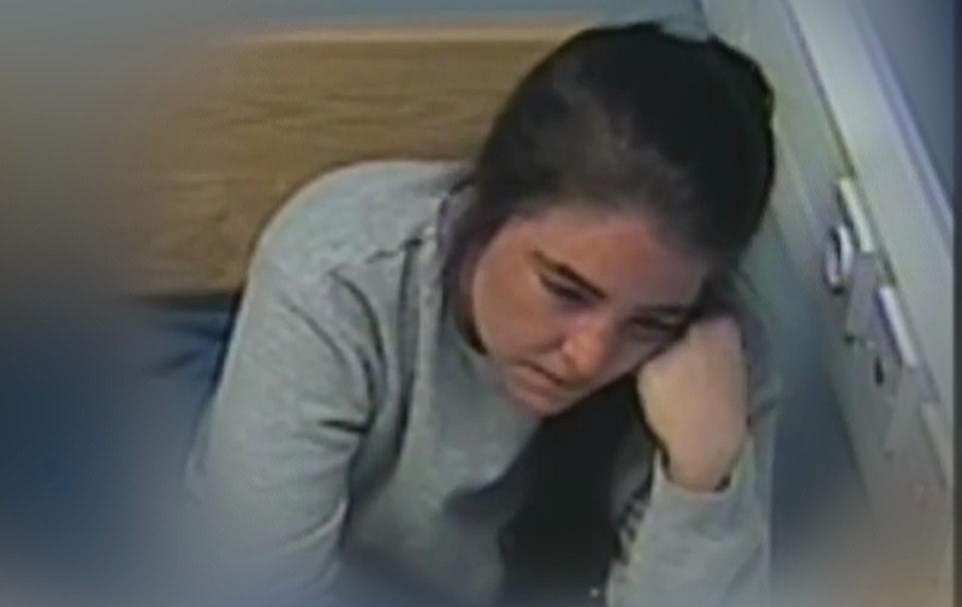 Shaikh during a police interview where she spoke about detonating a bomb. She was inspired by the Sri Lanka bombings on Easter Day last year which killed 259 people 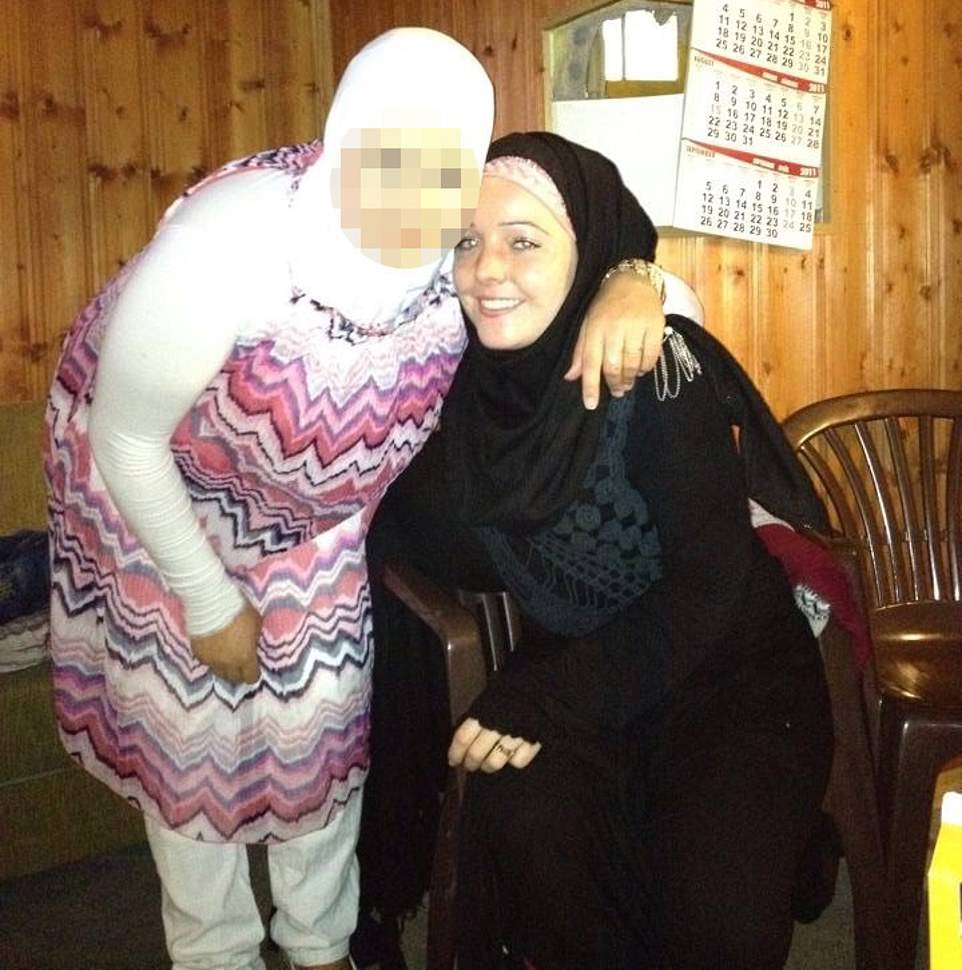 The Old Bailey was told how Shaikh (right, in Islamic dress) radicalised in 2015 after converting to Islam in 2007, following an act of kindness by a neighbouring Muslim family 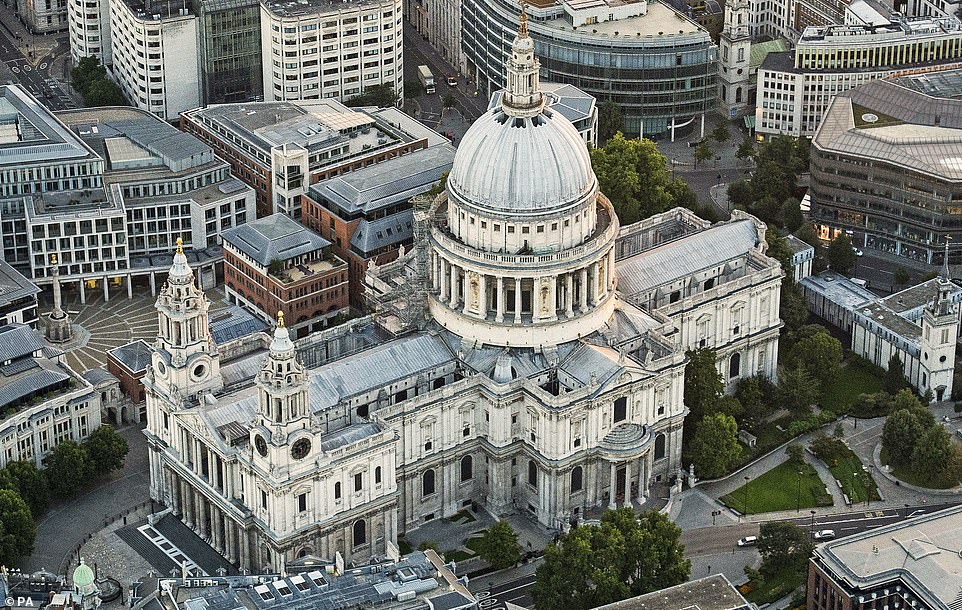 ‘I have asked myself whether life is required, and in my view, self-evidently it is, not least because it is impossible to predict whether you will be safe at the end of a determinate sentence,’ he added.

The judge jailed her for another eight years, concurrently for running the chatroom.

Jenny Hopkins, head of the Counter-Terrorism Division of the Crown Prosecution Service (CPS) said: ‘Safiyya Shaikh chose to live her life as a violent extremist with a murderous hatred of those who did not share her twisted version of Islam.

‘She hoped to inspire others by sharing terrorist images on social media but wanted to go much further.

‘The damning evidence presented by the CPS of her planned suicide mission to St Paul’s Cathedral left her with no room to talk her way out the charges.’

She had had her daughter removed to the care of social services and told a female undercover officer that she was launching a suicide attack so that ‘Allah to forgive me for everything.’

After she was arrested, Shaikh claimed she had got cold feet and was trying to back out of the plan, but in a recorded telephone conversation from prison, she told a friend: ‘I was going to go through with it, I wasn’t getting cold feet, I wasn’t having doubts.

‘The reason why I didn’t turn up on the day was that I was doing drugs. I would have arranged another appointment with them, I would have met them. That day I just didn’t wake up in time and that’s the truth.’

When she was first arrested Shaikh could not be interviewed by police because she was on a heroin comedown, a court hearing was told. 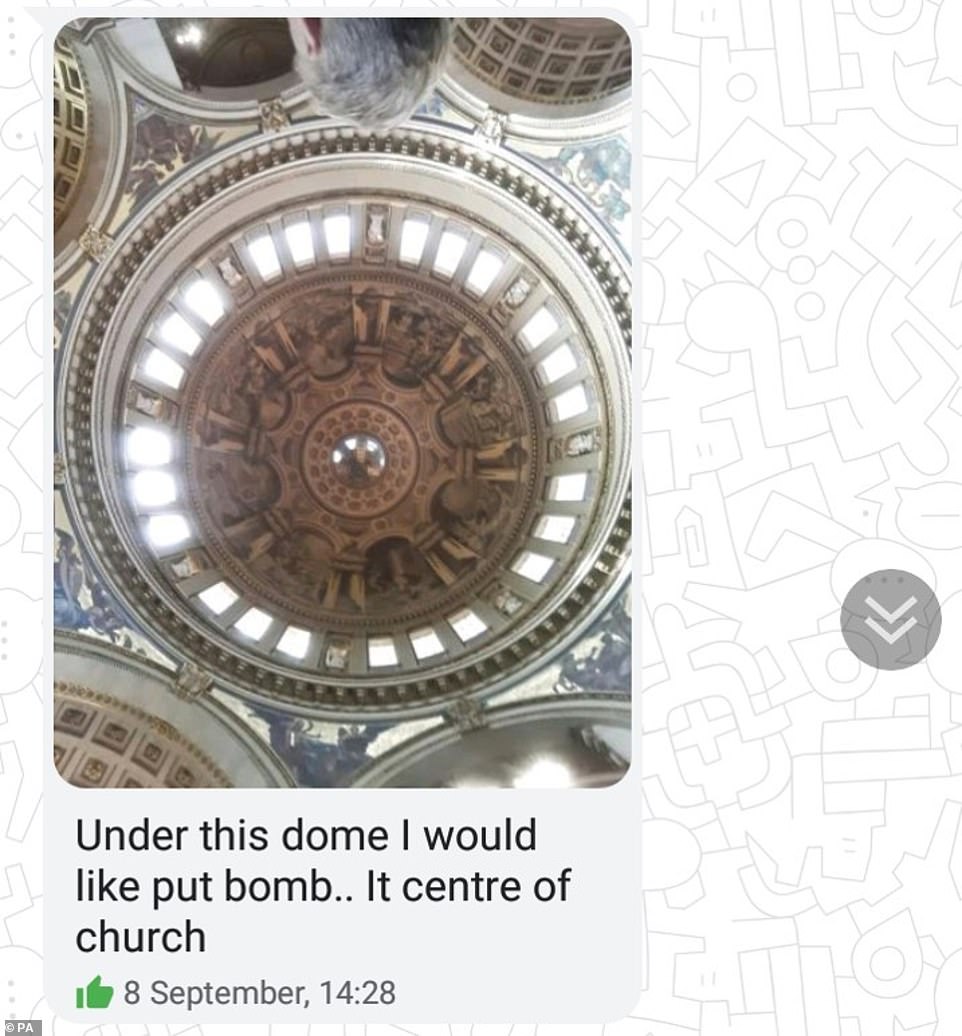 After converting to Islam, at the age of 24, she started to follow preachers connected to Anjem Choudary on Youtube and began watching gory beheading videos online.

In one message, she told an undercover officer: ‘Even though it was first hard to see the beheading videos, but I kept watching more and more and now I love and would take a kuffar [infidel’s] head off easy lol [laughs out loud].

On August 18 last year, Shaikh was stopped at Luton Airport on her way to the Netherlands under Schedule 7 of the Terrorism Act 2000.

Her ticket had been purchased by Yousra Lemouesset, the wife of a so-called ISIS ‘martyr’ who had returned to the Netherlands from Syria after her husband was killed.

Shaikh’s telephone was examined and her passport was seized from her. She was released but not allowed to travel.

Shaikh told him: ‘I try to inspire others to fight Insha’Allah [god willing] but lately I fell it’s not enough.

‘I want to take revenge for Allah our Prophet. I hate the kuffar [infidels] for what they do and I fell I cannot live comfortably in this dunya [earthly life] while our ummah [Muslim nation] suffer.’

Shaikh believed the man online could get hold of explosives for her and told him she was going to conduct a reconnaissance mission around St Paul’s Cathedral.

She said she had no ‘kafir clothes’ of her own and would have to ‘take something from my daughter.’

‘Also, just in case I was ever stop by police, what story I give them? I was thinking to say am visiting that church cos my gran loved it,’ she added.

On September 7 last year, Shaikh booked into the £200 a night, Great St Helen Hotel, near the ‘Gerkhin’ office block in the City of London, and the next day toured the cathedral, noting the number of American and Chinese tourists.

She picked up an order of service for Matins, noted down the exit routes and sent images to the officer suggesting she would place a bomb under the dome to bring the whole building down.

The next day, she sent an image of herself wearing a red niqab and black headband with Arabic writing on it, and giving the single fingered salute of ISIS.

She wrote: ‘I got this the other day. I love it. Always wanted to be a warrior, Soldier of Allah. I just don’t want waste any second. If I am gonna die, I want do most I can til end.’

The undercover officer, arranged for Shaikh to meet his ‘wife’, known as Azra, in Fassnidge Park in Uxbridge to be fitted for a suicide vest and hand over a Pink Nike holdall and what she referred to as a ‘girlie backpack’, to be filled with explosives.

Interviewed by police, Shaikh confessed that she planned to carry out a suicide bomb attack like the terrorist attack in Sri Lanka in order to gain access to heaven.

Asked what she was planning, she said: ‘Obviously if I had the rucksack, you know like what happened in Sri Lanka, like that. I was going to do the same thing – blow everything up.’

Shaikh pleaded guilty to preparing acts of terrorism and disseminating terrorist publications but claimed she would not have gone through with the plan.

Commander Richard Smith, head of counter-terrorism at Scotland Yard said: ‘Safiyya Shaikh was clearly dangerous. She was spreading vile directives for mass murder across the world and also planning her own horrific attack on UK soil.

‘I am pleased to say that we were able to identify her plans, assess her intent and then lay before her the evidence of her criminality resulting in the guilty pleas.’

At the same time as she was planning the attack, Shaikh was running a ‘channel’ on the encrypted Telegram application called GreenB1rds.

The channel disseminated extremist propaganda in support of ISIS and instructional material encouraging others to carry out ‘lone wolf’ attacks.

It included posters threatening attacks on Tower Bridge – wrongly labelled ‘London Bridge’- and Big Ben, saying: ‘Know O Crusader that you – Allah willing – will soon be pursued in your own homeland.’

Ms Morgan said Shaikh ‘personally created some of the imagery and videos and also instructed others with necessary skills to create the material, which she then circulated.’

The channels were run with a high degree of secrecy and technical application, storing the content in back-ups and re-creating the channels under different details whenever Telegram shut them down.

Shaikh kept a ‘banned list’ of those suspected to be spies, and even created a false persona of herself as a man.

Two weeks before her arrest, Shaikh boasted she was now running six ‘brothers’ channels’ along with her own, but added: ‘Alhamdullilah it’s good, and it’s an honur [sic] to be asked.’

Others included channels called Lone Wolves and Jannah is my Goal.

Shaikh had 15 ‘admins’ who helped her run the GreenB1rds channel of whom seven were ‘totally committed,’ she said.

‘They will continue my work when gone inshaAllah [god willing],’ Shaikh told the undercover officer.

After her arrest, Shaikh told a probation officer that when she ran the chatroom she ‘felt happier than she had ever done.’

She talked of having a ‘sense of purpose and no longer feeling empty’ and said that any doubt expressed about going through with the attack was mainly because her daughter had unexpectedly been returned to her care.

Since her arrest, and having had time think about what she had done, sh