Universities have pledged to ‘soften’ admissions rules with 40 per cent of A-Level results set to be downgraded today – and Gavin Williamson defying calls to scrap the process of ‘standardising’ marks.

Hundreds of thousands of students are learning their fate this morning after their courses were blighted by coronavirus, with exams having to be cancelled.

Instead teachers have recommended grades they think individuals deserve based on their performance – but those marks have then been moderated by regulator Ofqual to ensure the overall results are in line with previous years.

Some schools were already claiming this morning that huge numbers of their students have been marked down, with one in the North East saying 26 out of 39 students had their results downgraded.

However, ministers have been assured that universities are ready to be as ‘flexible’ as possible, and there are expected to be more places available due to fewer international students.

In a round of interviews Mr Williamson dismissed the idea of following Scotland’s example by dropping the ‘standardisation’ and relying exclusively on teachers’ verdicts. 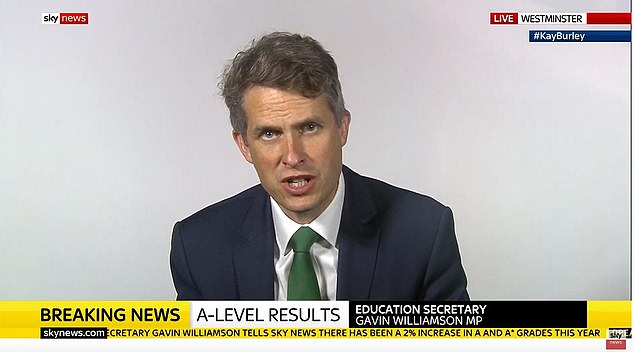 In a round of interviews today, Gavin Williamson dismissed the idea of following Scotland’s example by dropping the ‘standardisation’ and relying exclusively on teachers’ verdicts 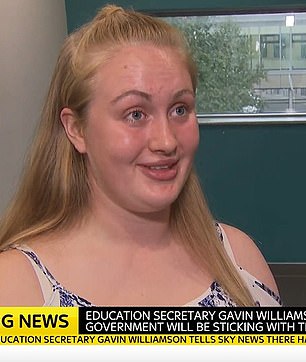 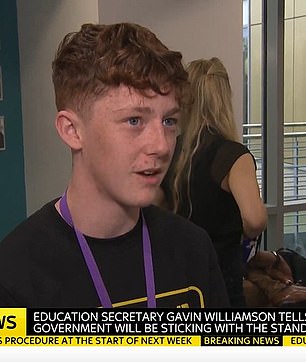 Pressed Sky News whether the government will stick with the standardisation, Mr Williamson replied: ‘Absolutely, when we’ve consulted widely, when Ofqual consulted widely (on) the whole system of awarding, this is the message that we got from everyone – this is the right approach to go forward.

‘You’ve got to have a system that has checks and balances, that looks at the whole performance and making sure you maintain standards within the exam system, to ensure those results carry credibility.’

Mr Williamson said a ‘late clearing process’ is expected to be available for pupils who opt to sit A-level exams in the autumn.

He told BBC Radio 4’s Today programme: ‘Universities are looking at being as flexible as possible.’

The Education Secretary said there will be more pupils this year with higher grades, with A and A* grades up two percentage points..

‘There’s going to be more youngsters in a position where their grades are going to meet the usual exam expectations of those universities,’ he said.

Similar standardisation arrangements in Scotland were humiliatingly abandoned by Nicola Sturgeon this week after fury that around 125,000 pupils had been downgraded.

The volte face meant that the Higher pass rate is up 14.4 percentage points compared to last year.

Ofqual had warned that failure to standardise A-Levels in England could push up the pass rate by 12 percentage points.

But the system has been criticised as it uses the past performance of schools, potentially hitting the brightest poorer pupils who can do much better than their cohort.

In an 11th-hour concession on Tuesday night, Mr Williamson offered a concession by announcing that the potential grounds for appeal were being widened to cover students awarded lower grades than they received in mock exams.

A-level and GCSE pupils will now be able to take the grades they are awarded, appeal through schools, or sit exams in the autumn, in what Mr Williamson has branded a ‘triple lock’.

But it is still not clear what will count as a ‘valid’ mock result, and Ofqual has cancelled a press conference on the issue this morning.

Mr Williamson confirmed that the details of the arrangements were not likely to be revealed until the beginning of next week – potentially leaving many students in limbo.

Labour leader Sir Keir Starmer said that it was a ‘blatant injustice’ that young people could have their futures decided by an algorithm.

He said: ‘Pupils and parents are rightly worried that years of hard work are about to be undone because a computer has decided to mark their child down. 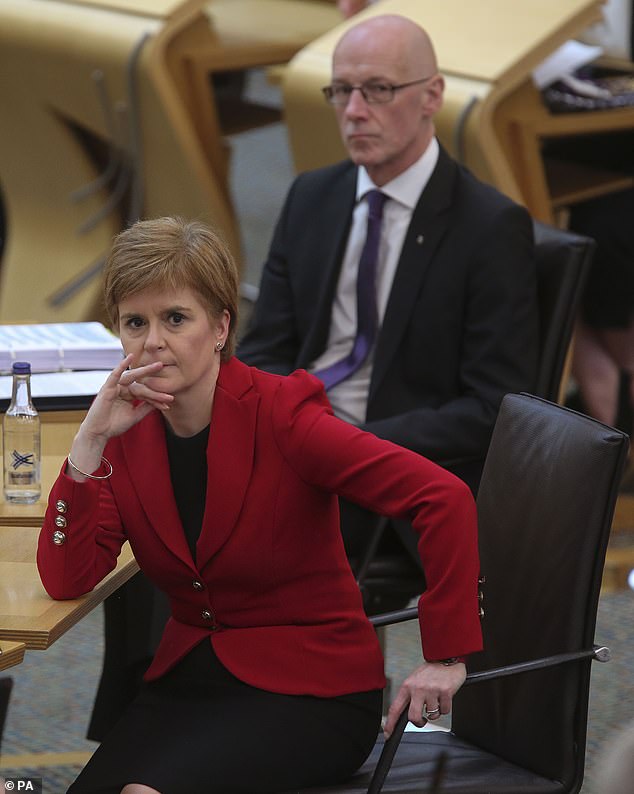 Similar standardisation arrangements in Scotland were humiliatingly abandoned by Nicola Sturgeon and her deputy John Swinney (pictured yesterday) after fury that around 125,000 pupils had been downgraded

‘For too long, the Tories have considered the needs of young people as an afterthought when their needs should have been central.

‘It’s a blatant injustice that thousands of hardworking young people risk having their futures decided on the basis of their postcode.’

‘You definitely need a check and balance, there is no problem with that.

‘You also need to have a national standard… I don’t believe we should go down the Scottish route at all.’

But Mr Halfon insisted there should be a ‘genuine appeals process that is for everyone’.

‘I welcome what’s happened in terms of the mocks, but I think it should be an appeals position that is easy to navigate, especially for disadvantaged pupils,’ he said.