If a team of Hollywood scriptwriters researching a gritty crime drama invented a Nicola Gobbo character – the peroxide blonde barrister and governor’s niece who became the darling of the underworld while working as a secret police informer – they would be sent to a detox clinic to dry out.

That is why true crime writing is easier than fiction; many of the real-life characters are so over the top they are parodies of movie mobsters. Who could imagine Tony Mokbel, a near-broke pizza shop owner who built a $400 million drug empire, escaping to Greece in an oceangoing yacht?

Or Carl Williams, an unemployed supermarket shelf-stacker turned drug boss, who hired hitmen at will only to be bashed to death in a maximum-security prison?

When popular writer Shane Maloney needed a crime reporter for his book Sucked In, he invented Vic Valentine – a character, it is claimed, based on me. 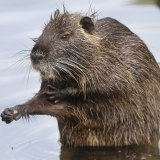 “The journalist was a spare, spindly type with a sharp-featured rodent face. His head, almost perfectly spherical, was shaved as clean as a burnished hazelnut. He wore a hairline moustache, a faint self-deprecating smirk and a black leather motorcycle jacket.” (Some time earlier I had been on a panel with Mr Maloney and for reasons I cannot explain, did choose to wear a leather jacket.) 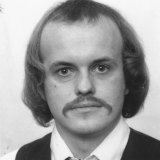 On reading the description I can’t see the resemblance but, for the record, both the jacket and the moustache are long gone.

Mullett has never met Gobbo but their futures are now connected through the Royal Commission into the former lawyer’s disastrous role as a police informer.

Mullett is a police hero, one of only two officers to receive two Valour Awards for exceptional bravery in apprehending armed offenders. And yet his career ended in disgrace, accused of being a traitor who tipped off an allegedly corrupt colleague that he was being investigated for helping a hit team find their victim.

"Fish" tended to only know one way to take on a problem and that was head-on. After 18 years chasing some of Victoria’s most dangerous offenders he moved into union politics and in 1998, while still a sworn police officer, was elected secretary of the Police Association.

Though the power of traditional unions has waned and their membership numbers decreased, the Police Association has only become stronger. With near 100 per cent take-up (it has a multimillion-dollar legal cost fund to pay fees if a member faces a work-related court action) the Association is flush with funds. As police numbers increase, more members means more funds and more muscle. 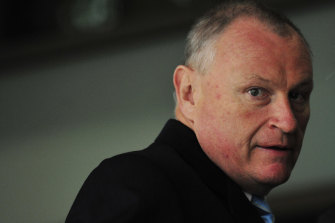 Paul Mullett. It is time to look back.Credit:Jason South

With law and order always an election issue, the Association is a powerful political voice. It is also unique as all but one of the most senior officers (including present Chief Commissioner Shane Patton) remain members.

Back in 1998, Mullett butted heads with then chief commissioner Neil Comrie and the government of the day wanted the next chief to have a more cordial relationship with the union. It was one of the selling points for NSW assistant commissioner Christine Nixon, who had been an office holder for the NSW branch of the Police Association.

Appointed Victoria Police's chief commissioner in 2001, her relationship with Mullett was never warm. He would have preferred a local candidate. Nixon’s NSW experience was that old-school detectives tended to be anti-women and anti-change. Mullett thought Diplomacy was a fancy gelato flavour and Subtlety a veteran Warrnambool steeplechaser.

By 2007 they were barely speaking and only met twice in a year. Both sides had spies in the ranks, with two senior officers leaking to the Association on Nixon and members of the Association executive snitching to police command.

Then we come to a scene that would send the Hollywood writers back into rehab: the 2003 murder of Shane Chartres-Abbott, a male prostitute who claimed to be a vampire. 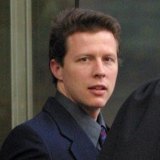 Eventually the theory was that Mark Perry organised a hit team to kill Chartres-Abbott as revenge for raping Perry’s girlfriend and biting off her tongue so he could drink her blood. The male prostitute was killed as he was leaving his Reservoir home to attend court on the rape charge.

In 2007 a career criminal and killer known for legal reasons by the name Jack Price told police he was the gunman. "Price" was a master manipulator, a jailhouse lawyer and a serial liar. He faced several murder trials but while he would confess to being involved on each occasion he would persuade someone else to confess to being the shooter.

This time was different. He said he was the one who pulled the trigger. What’s more, he said he was given the victim’s address by a serving policeman, Peter “Stash” Lalor. Although there was no evidence of Lalor accessing the address through the police computer, it was still a dynamite claim.

Remember the environment at the time: in 2004 police informer Terence Hodson, who had promised to testify on police corruption, and his wife Christine were shot dead in their Kew home.

Now Price, who was connected with several underworld murders, was talking – but was he telling the truth? He admitted he was a paid hitman for years, although he added he didn’t work on weekends or his birthday. Work-life balance, it would seem.

Police set up Taskforce Briars to investigate the Chartres-Abbott murder but the top-secret investigation leaked and Lalor knew he was a suspect.

This resulted in a leak investigation codenamed Diana that concluded assistant commissioner Noel Ashby, lobbying to be Nixon’s successor, leaked the information to Mullett, who he wanted onside in his run for the top job. According to this account, Mullett then ensured Lalor was tipped off. 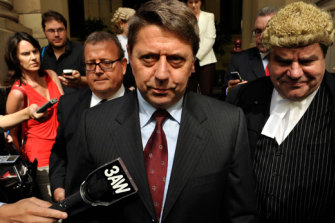 Noel Ashby leaves the Supreme Court after perjury charges against him were dropped in 2010.Credit:Justin McManus

Mullett and Ashby were grilled in public hearings of the Office of Police Integrity. Ashby resigned and in November 2007 Nixon suspended Mullett from the force and banned him from any station in Victoria, making his job as Police Association secretary untenable.

In July 2008 he was charged with perjury and attempting to pervert the course of justice. Some charges were thrown out at committal while the remainder were dropped before trial. It was an embarrassing and expensive farce.

Mullett “retired” in March 2009 at the completion of his Police Association contract.

Jack Price made five separate statements on the murder, including saying he conducted surveillance on Chartres-Abbott’s home from the Reservoir railway station car park, a spot from which there was no line of sight; saw the victim picked up in a car, when he actually took the train to the city; and that he shot the victim from a metre away, in a manner that matched a newspaper report but not the actual forensic evidence. The person who is probably the real killer confided to a friend that he grabbed the victim’s head then shot. This matches the entry wound under Chartres-Abbott's chin.

Price claimed to be wearing clothing that matched the description publicly released by the police, but that description was of the accomplice, not the gunman. Meetings Price said took place did not match his phone records and a witness description did not fit Price’s build.

There is a transcript floating about, allegedly from an illegal prison bug, where Price says he planned to confess to a series of murders then “bring them all down”. In true Watergate style, 14 pages of the 200-page transcript are missing.

There is no evidence Lalor provided the address and no proof Price was there. Three men, including Perry, were charged with the murder and acquitted.

So where does Gobbo fit in? She was assigned to work as a double agent, eventually claiming to the Royal Commission on police informants that Perry confessed to her – a claim that is clearly bogus.

One of her clients was ex-detective David “Docket” Waters, a great mate of "Stash" Lalor (Docket & Stash sounds like a Will Ferrell spoof.) According to Gobbo, Waters said Lalor was not told of Taskforce Briars' existence by Mullett or his associates but by two detectives from Prahran who were interviewed by an investigator on the Briars team, Senior Sergeant Ron Iddles. 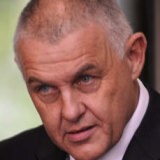 Lalor was never grilled on the claims and the information was concealed from Mullett during OPI hearings and later when he faced criminal charges. The information was also not available to him when he sued Nixon for malicious prosecution, a case he lost in the Supreme Court.

The information was probably concealed to protect Gobbo from being outed as a double agent, but it left Mullett without vital evidence that supported his defence. The statement creates sufficient doubt in an already weak case that indicates Mullett should never have been charged. When Mullett’s lawyers at the Gobbo commission asked Iddles about Lalor's assertion, he agreed: “It gives an alternative to the allegation he [Mullett] was charged with.”

For years now it has looked as though Mullett was finished. But the Police Association has reviewed the case and agreed to fund a potential appeal to the Supreme Court.

If the Nixon malicious prosecution case is revisited other names will be added – names of police Mullett claims conspired against him to ruin his reputation and career.

Mullett is now back in the game and his unlikely ally is none other than Nicola Gobbo.

You couldn’t make it up and if you did they wouldn’t believe you. Suck on that, Shane Maloney.