U.S. Defense Secretary Jim Mattis said on Thursday the United States would ‘probably regret’ not keeping a holding force in Syria to ensure that ISIS militants did not re-emerge, the latest sign that a total U.S. withdrawal was unlikely.

U.S. President Donald Trump on Tuesday said he wants to withdraw American troops from Syria relatively soon but also appeared to temper that position by voicing a desire to leave a ‘strong and lasting footprint.’

A footprint, in military-speak, usually refers to a U.S. troop presence.

Mattis did not offer any clear indication of how long U.S. troops would remain in Syria or hint at future troop levels, stressing the ongoing mission to train local forces to combat Islamic State. 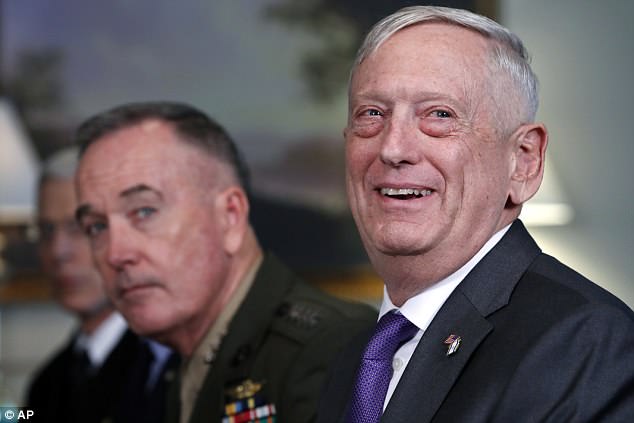 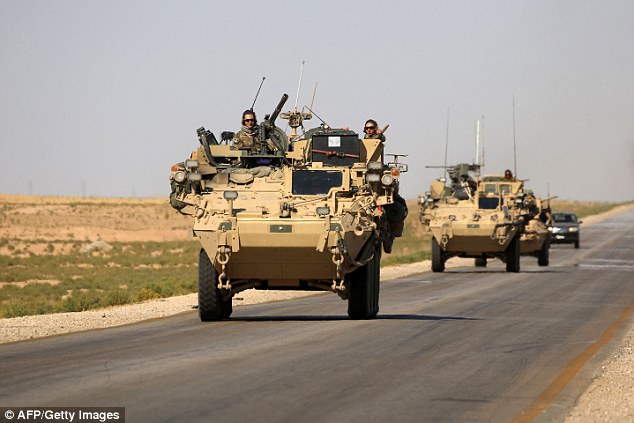 Boots on the ground: U.S. armor is present in Syria and was seen near the northern village of Ain Issa in June last year. Mattis suggested withdrawing it would come to be regretted

‘We have to create local forces that can keep the pressure on any attempt by ISIS to try to (re-emerge),’ Mattis told a Senate Armed Services Committee hearing, using an acronym for Islamic State.

When asked whether it would be risky to have local holding partners without U.S. forces, Mattis said: ‘ I am confident that we would probably regret it.’

Right now, ‘we are not withdrawing,’ Mattis told the Senate Armed Services Committee.

‘You’ll see increased operations on the Iraqi side of the border, and the French just reinforced us in Syria with special forces here in the last two weeks. This is an ongoing fight right now.’

The Pentagon and State Department have held that a longer term U.S. effort will be needed to ensure a lasting defeat of Islamic State.

The group seized large swathes of Syria and Iraq but has gradually lost its territory since the United States and its allies started a military offensive in 2014.

Some of the harshest critics of a potential withdrawal from Syria come from Trump’s own Republican party, which blasted President Barack Obama when he withdrew U.S. from Iraq in 2011. 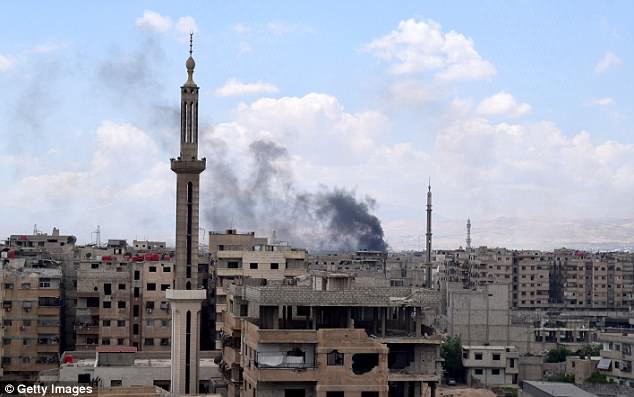 No end: Assad’s regime carried out airstrikes on an ISIS-controlled part of the Yarmouk Palestinian refugee camp on the outskirts of Damascus this week

Iraqi forces began to unravel and eventually collapsed in the face of Islamic State’s advance into the country in 2014.

‘We learned that the Iraqi forces weren’t capable of providing security inside the country and that gave the enemy an opportunity to resurge, that is where really ISIS had the space to grow,’ U.S. Marine General Joseph Dunford, the chairman of the Joint Chiefs of Staff, told the hearing.

U.S. airstrikes, troops and U.S.-backed Syrian militias have dealt heavy blows to Islamic State in Syria but the group still holds pockets of territory and is widely expected to revert to guerrilla tactics if the last remnants of its once self-styled ‘caliphate’ are captured.

Even after IS — which still control two pockets of territory along the middle Euphrates River Valley — are defeated, the US military wants to maintain a presence in Syria to prevent the jihadists from returning.

France is a longstanding member of the international coalition fighting IS in Iraq and Syria, and helped bombard the jihadists in the Mosul area during the Iraqi operation to recapture the city.