Confidence in the Welsh government has nosedived since leader Mark Drakeford decided to ban alcohol in pubs to combat a Covid-19 surge, a new survey revealed today.

Trust in the First Minister’s personal handling of the pandemic also plummeted in the space of just a month, going from net positive to net negative.

The Welsh Labour-led administration imposed new rules on December 4 which forced pubs, bars, restaurants and cafes to stop selling alcohol and to shut by 6pm, sparking criticism from the public and opposition politicians.

The YouGov poll, published today, said 47 per cent of people now think the government is doing a bad job, a rise of 19 percentage points from the 28 per cent who said so in November before the new rules came in.

It also found that only 45 per cent think the administration is doing well, a drop of 21 percentage points compared with the 66 per cent who said so a month ago, leaving Cardiff Bay with a net score of minus 2, its lowest rating since the start of the pandemic.

The figures also show that the Labour administration is currently more popular among nationalist Plaid Cymru voters than its own party’s. 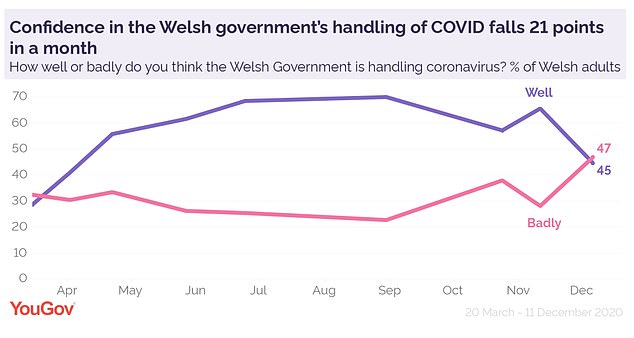 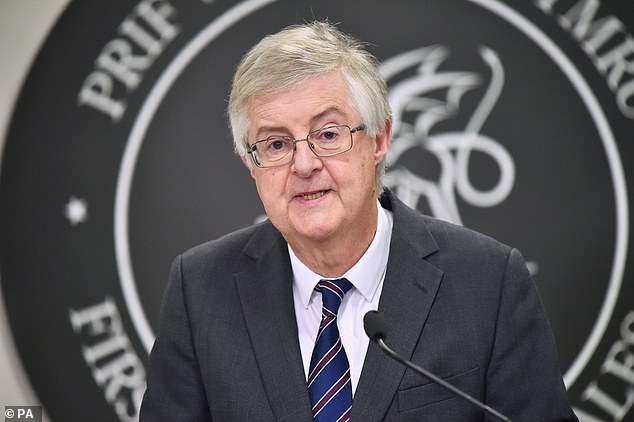 Trust in the First Minister’s personal handling of the pandemic also plummeted in the space of just a month, going from net positive to net negative 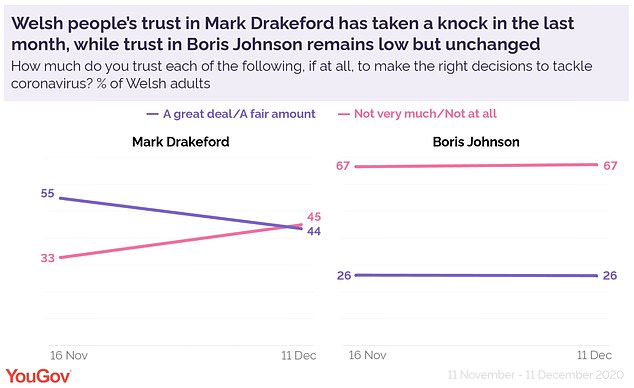 Support for Mr Drakeford also fell, with 44 per cent now saying they trust him a great deal or a fair amount, a drop of 11 percentage points, while the number of people who said they do not trust him much or at all rose by 12 percentage points to 45 per cent.

The poll showed a split in the Welsh public’s support of the latest restrictions on hospitality, with 46 per cent opposing them and 45 per cent in favour.

In comparison, support for the 17-day firebreak lockdown between October 23 and November 9 saw 60 per cent in favour and 26 per cent against, despite criticism of a ban on the sale of non-essential items in supermarkets.

The rules restricting hospitality were described as ‘disproportionate’ by the Welsh Conservatives, while Plaid Cymru said it was ‘deeply regretful’ and the result of a lack of tighter restrictions in the aftermath of the firebreak.

Defending the move at the time, Mr Drakeford said: ‘I take the decisions that I do because I know that they are the right decisions and that they will save lives here in Wales.

‘Even when the decisions are difficult, so long as I can look at myself in the mirror and know that I am doing what I believe – with all the evidence that we draw on and the advice that we get – that I am doing and this Government is doing the right thing.

‘That is what has to matter to me, not whether it is in a temporary way unpopular or that other people might take a different view.’

But the YouGov poll showed that Mr Drakeford and his Government still enjoy greater support from the Welsh public compared with Boris Johnson and his UK Government.

And 53 per cent of people surveyed still favour the approach taken in Wales to tackle the virus compared with just 15 per cent who prefer the approach in England, with a quarter (25 per cent) saying they would not be happy with either.