Five men accused of the gang rape of an 18-year-old woman have instead been convicted on the lesser crime of sexual abuse, sparking protests outside of court.

The woman was attacked by the men at the 2016 San Fermin bull-running festival in Pamplona, northern Spain.

The decision, at a court in Madrid, has drawn immediate criticism and outrage with protesters gathered outside the court building chanting: ‘It’s not abuse, it’s rape.’ 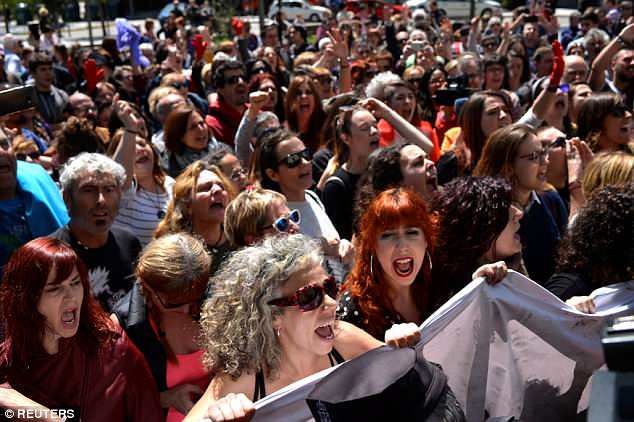 Protesters chant ‘It’s not abuse, it’s rape!’ outside court after the sentences were given to members of ‘The Wolf Pack’

The five men, all in their late 20s, have been sentenced to nine years in jail each, although they can appeal.

The victim can also appeal the decision.

The group of five, known as the ‘Wolf Pack’, filmed their attack during the festival.

They are originally from Seville while their victim is from Madrid. 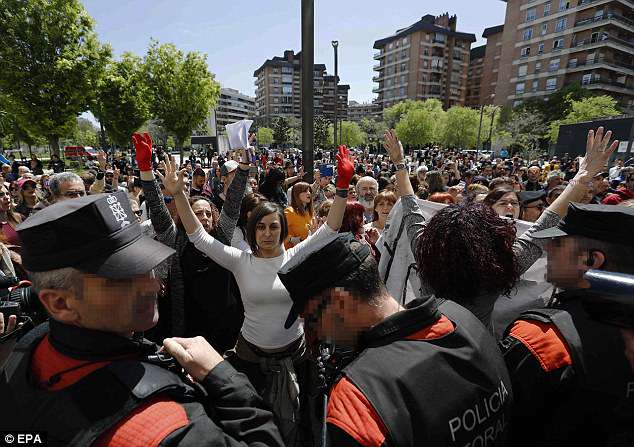 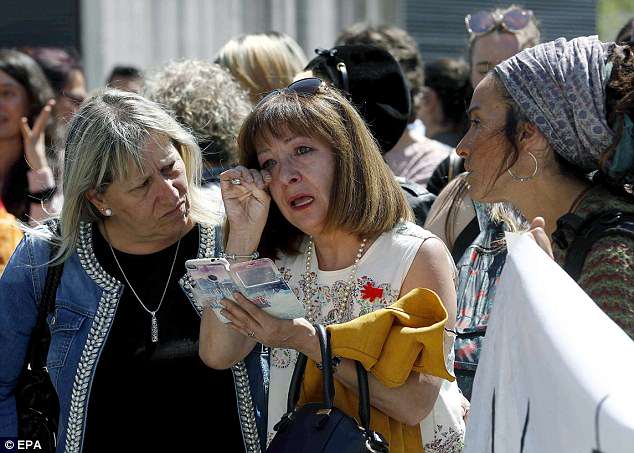 Some were outraged by the sentences, with the woman in the photo clearly upset by the ruling

Neither the men nor the victim were present when the judgement was read out after a five-month trial, which was held behind closed doors to protect the woman’s identity.

The case has also drawn international attention, coming at a time of global concern over the sexual abuse of women in the wake of the Harvey Weinstein scandal.

The state prosecutor had asked for prison sentences of more than 20 years for each of the men. The men were convicted of the lesser offence of sexual abuse and not of rape, causing widspread and immediate criticism The five men, all in their late 20s, have been sentenced to nine years in jail each, although there is a chance that the victim or the group will appeal

Under Spanish law, the lesser charge of sexual abuse differs from rape and does not involve violence or intimidation.

The charge is used in cases of sexual activity between underage partners and those seen not capable of giving permission for sexual contact, such as those who are severely handicapped or under the influence of drugs or drink.

Feminist groups scheduled protests for Thursday evening in Spanish cities around the country, including outside the Justice Ministry in Madrid, in reaction to the sentence.

‘If five people surrounding a girl is not aggression, the question has to be what is wrong with our criminal code?’ former Secretary of State for Equality Soledad Murillo said in comments published in El Pais newspaper.

National Police also showed their support for the vicitm, saying in a Tweet: ‘No is no – we are with you’. Feminist groups scheduled protests for Thursday evening in Spanish cities around the country, including outside the Justice Ministry in Madrid During the behind-closed-doors trial, the state prosecutor had asked for prison sentences of more than 20 years for each of the men

The five men include a former policeman and former soldier, and were dubbed ‘The Wolf Pack’ after the name of their Whatsapp group.

They have have been held in custody since July 2016.

The judge, who did not give the reasoning behind the sentence, also ordered the men to pay the victim 50,000 euros (£43,450) in compensation. 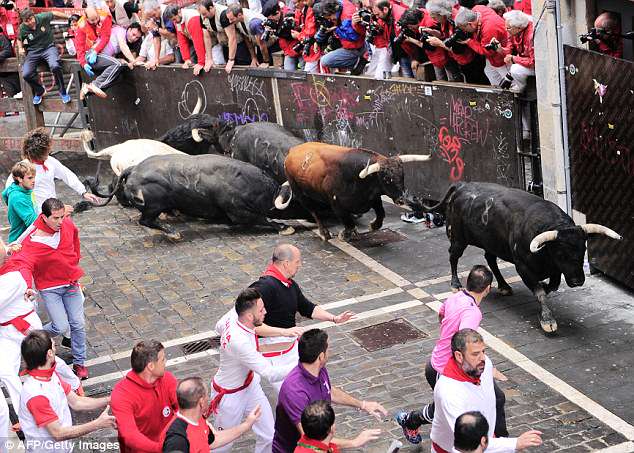 The attack on the woman took place at the San Fermin bull-running festival in Pamplona, northern Spain in 2016

Fragments of video from the men’s mobile phones taken at the scene were used as evidence in the trial, alongside witness accounts and biological tests.

The group of five dubbed ‘The Wolf Pack’ by Spanish media

José Ángel Prenda, 28: the leader of the five. He wrote a message in their WhatsApp group about the video of them having sex with the woman. He was sentenced to two years in prison in 2011 for theft with force.

Antonio Manuel Guerrero, born in 1989: He is a Civil Guard police officer, and is thought to have recorded six videos. He also admitted to stealing the victim’s phone

Ángel Boza, 26: his criminal record includes theft with force and driving under the influence of alcohol and drugs

Alfonso Jesús Cabezuelo, 29: an army officer who is thought to have recorded one video

Footage showed how the group had wandered the streets before two of them led the victim into the basement block of flats.

A police report said that the men surrounded the woman, removed her clothes and had unprotected sex.

There were seven videos of the incident, totalling 96 seconds.

One of the men involved also posted messages in a WhatsApp group celebrating what they had done, while promising to share the recording.

The victim maintained a ‘passive or neutral’ attitude throughout the scene, keeping her eyes closed at all times.

After the act, her phone was stolen.

The defence team argued the incident was a case of consensual group sex.

She was found in a distraught state by a couple afterwards and told the trial she was still having psychological treatment to deal with trauma.

Some of the five men were apparently later seen abusing another woman, who seemed to be unconscious, in a separate video.