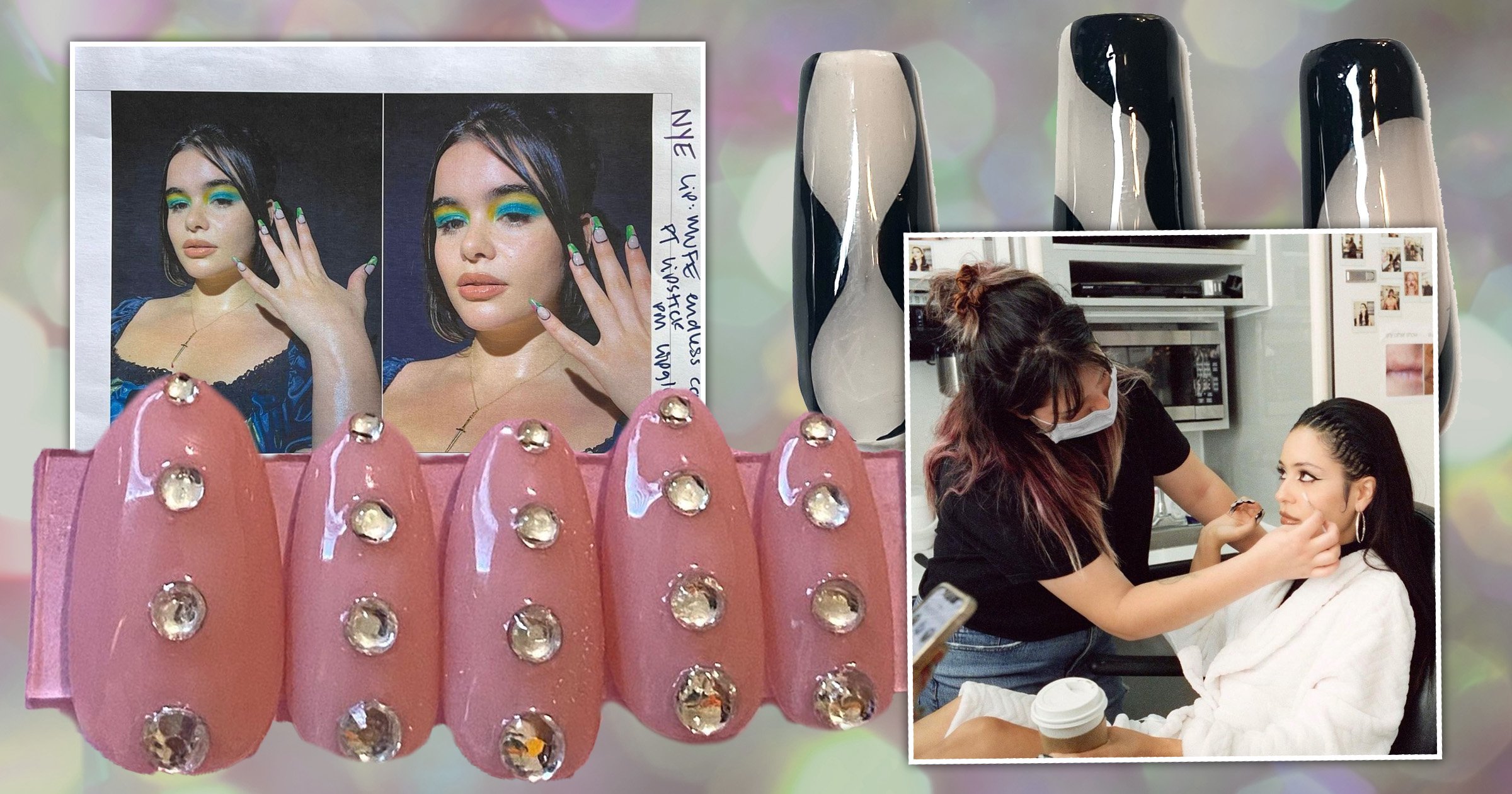 That’s for a lot of reasons. For one, it’s a great show, with some high-drama plot points. Then there’s the cast, who inspire total adoration (anyone else a bit obsessed with Angus Cloud right now?).

And a big one that keeps the conversation going? The beauty.

When the first season dropped in 2019, the high-octane glitter, graphic liner, and all manner of bejewelling sparked a trend for ‘Euphoria makeup’ that continued long after the final episode aired and all the way through lockdown.

As season two comes out, all eyes are on, well, the character’s eyelids, to see how the onscreen looks will inform the way we do our makeup in the year ahead.

But perhaps this time around, we should be checking out the nails, too.

Take a look at shots from the first season and you’ll notice that there aren’t really any statement nails. Cassie wears a nude tone for the prom. Jules occasionally has a pop of yellow on her tips. That’s about it.

‘I was not on board for season one, but of course watched it just as a viewer and instantly became obsessed,’ Natalie, 32, tells Metro.co.uk. ‘As I watched it, I noticed there was no nail art and thought to myself: “These characters need nail art – it just makes sense”.’

When Natalie shared her thoughts on the characters’ need for nail art, Alexa was entirely on board.

‘She and I have been totally synced since the day we met,’ Natalie explains. ‘We have a lot of similar interests and a ton of mutual friends, and it just felt super symbiotic.’

Natalie, who has previously created nails for everyone from Adele to Ariana Grande (on the cover of Vogue, no less), then reached out to Euphoria’s head makeup artist, Donni Davy, who quickly welcomed her as part of the team.

And with that, season two had a new addition to its beauty roster: detailed nails that perfectly capture each character’s identity.

‘Ultimately the nails come down to who that character is or who they are trying to become,’ Natalie notes. ‘I really viewed the characters as real people and looked at their individual styles, tastes, and personalities.

‘We also definitely take into account what that character is going through in that specific episode.

‘They’re a reflection of how that character is feeling in that moment.

‘There are definitely some nails that invoke a feeling of “sexiness”. There are also nails that have a heaviness or darkness to them.

‘I always say that nails are a really personal journey for people just like, for instance, tattoos. It’s the reflection of how you want to represent yourself to the world in that moment.’

Does that mean that we can dig into the nail looks for clues about what happens for Cassie, Maddy, Kat, and Jules this season? Natalie won’t say – but we definitely predict some conspiracy theories.

Just look at the juxtaposition of Cassie’s pinky-nude nails with diamante versus Maddy’s darker, more graphic design when they’re running alongside Nate in the hospital in episode two – that’s got to mean something, right?

Regardless of how deep you go, it’s likely that just as Euphoria makeup continued to trickle down through our real-life aesthetic last year, its nail looks will inform what we ask for at the salon.

So, what can we expect?

‘I think people are noticing the nails right now because it’s the first time seeing nail art on the show, and actually really on any show,’ Natalie tells us. ‘It’s an exciting time for nail art enthusiasts, and by now, the general public is a lot more well versed to nail art than they were even five years ago!

Natalie notes that some key themes and trends for this season are ‘big, bold patterns’ and ‘nails that shine with rhinestones and metallics’.

‘There are some epic nails coming up later in the season that I am really excited to see on TV,’ she adds.

‘There are some particular nails coming up that I think are going to cause a big stir, but I want to surprise the viewers on those, so I won’t give too much away.’

And beyond Euphoria, what does a top nail artist reckon we’ll all be doing to our talons next year?

Natalie says: ‘It’s all about funky, 3D nails. The more quirky and abstract, the better.

‘It’s been so awesome to see nail art take on a surrealist approach; it’s kind of my dream to see it switch to that world. Everyone is becoming more exploratory.

‘Also, LOTS of colour! There are no more seasonal rules: just do what you want and what makes you feel good.’

The best grooming gifts for dads this Father's Day

Emily Ratajkowski Makes a Case For Bangs in Summer