FYI these iconic 90s haircuts are sticking around in 2022

Few hairstyles brought us as much joy as the greats of the 1990s; and now they’re breaking through to the mainstream once again. Have your pink hair dye handy as we throw it back to some classic 90s looks – complete with a contemporary upgrade.

The 90s renaissance picked up speed in 2020 and it’s showing no signs of slowing down heading into 2022.

Starting with accessories, we welcomed the return of Alice bands, scrunchies and statement clips. Then, we moved on to flirting with baby bangs, wispy updos, butterfly clips, claws and pigtails. Far from fizzling out, the surge towards nostalgic 90s hairstyles is still going strong, spurred on by celebrities and influencers.

From Bella Hadid working ‘the Rachel’ to FKA Twigs taking Mel B’s space buns to the next level, the fashion pack are well in on the 90s haircut action. But are you ready to join them for a trip down memory lane – you know, the one that leads you straight to the hairdressers? Thought so. Let’s crack on.

’The Rachel’ needs no introduction; Jennifer Aniston’s Friends haircut, created by Chris McMillan, spawned a million copycats and made “choppy layers” a standard salon request. All about honey highlights and face-framing layers, the style eventually fell out of favour, but it could be time to dig out that hot brush and bring back the feathering once again.

Forget precise blow-dried layers, the modern ‘Rachel’ is more about movement and rich honey tones. Bella Hadid leads the way with a look that colourist Jenna Perry says was directly influenced by Aniston’s iconic 90s ‘do.

A timeless protective style, braids look just as good now as they did in the 90s when the likes of Brandy and Janet Jackson inspired a new wave of box braid fervour. Janet’s legendary braids-plus-white-headband look can be lifted directly from the 90s to today for guaranteed sartorial success.

Now: Braids with a twist

When it comes to box braids, anything goes now, from long, chunky braids to colourful twists – as spotted at Paris Fashion Week. Celebrity references come from Rihanna and Zendaya (above), who earns a bonus 90s point for her piecey 90s bang. 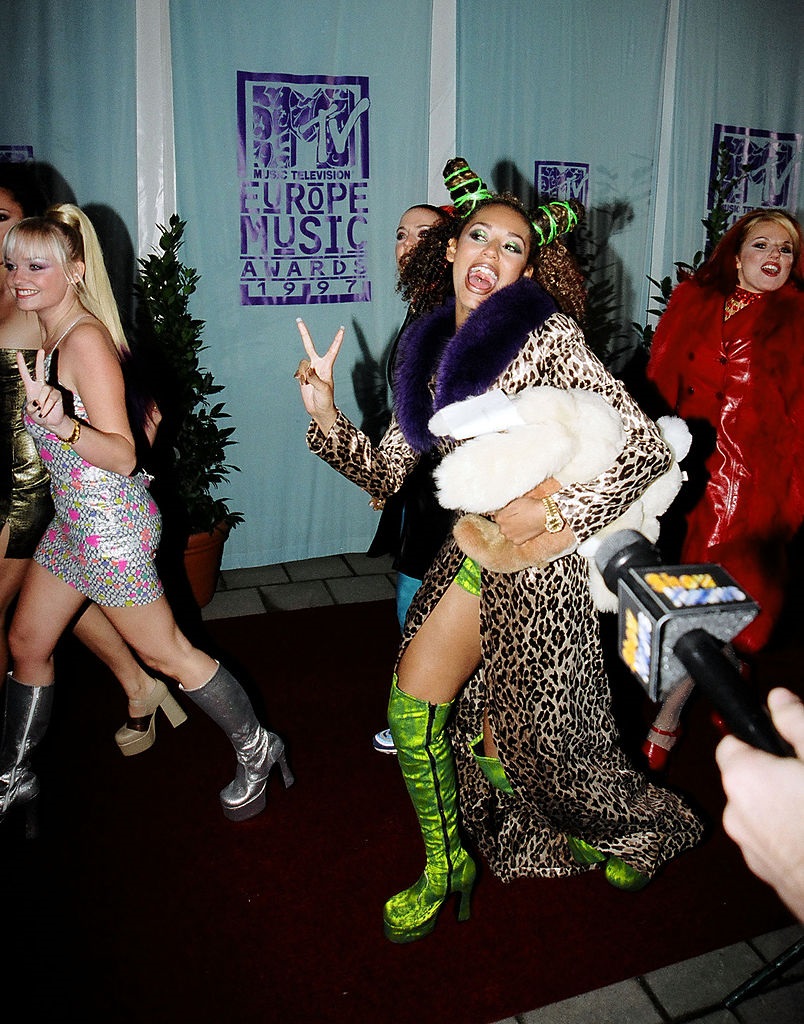 Mel B could fill an entire feature of great 90s hairstyles – from her iconic Bantu knots to natural curls – but when it comes to copycat-inspiring looks, the space buns (or ‘spice’ buns) definitely deserve a place on the list.

If you thought you were too old for space buns more than 30 years on from the original style, think again. Jennifer Lopez proved that two buns are better than one, with a look styled by Chris Appleton, leaving the front section of the hair loose (also tapping into another 90s trend, for a double whammy win).

FKA Twigs also ticked off two 90s trends for the price of one with space buns in a vibrant red hue, worn with side-slicked bangs, that had us itching to reach for the Wella Silvikrin.

Then: the short bob 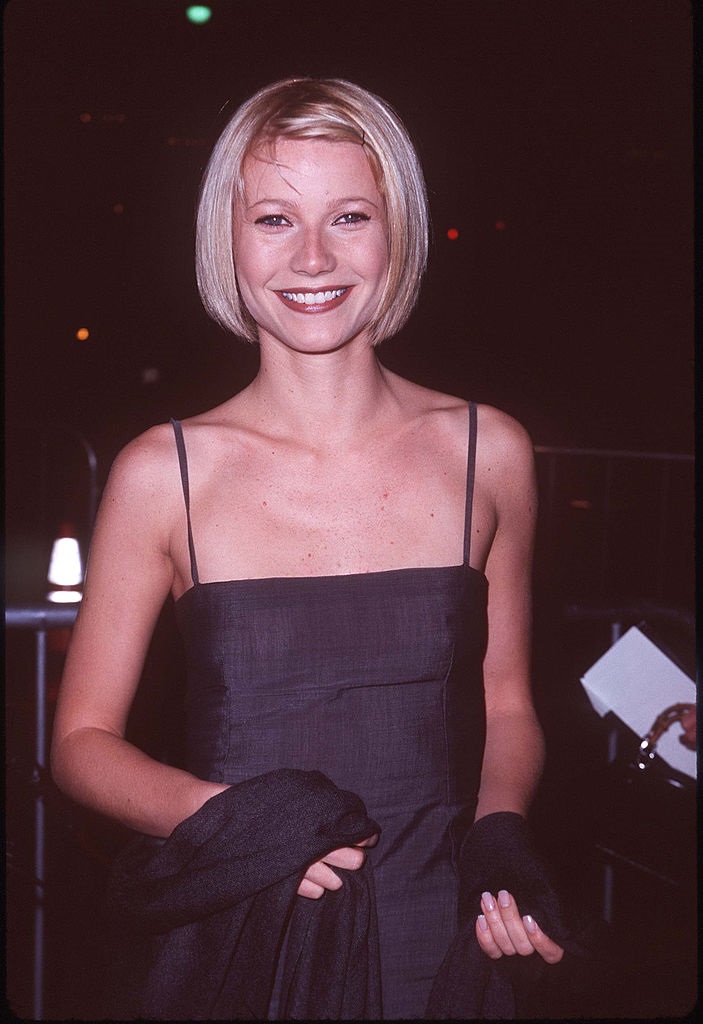 Gwyneth Paltrow’s Sliding Doors bob, in hindsight, looked good mainly because it was worn by Gwyneth Paltrow. Nevertheless, that didn’t deter an army of lookalike cuts in the 90s, spilling into the early noughties and merging seamlessly into the ‘Pob’ in 2006 when Victoria Beckham claimed the look as her own.

As with most covetable 2021 looks, the appearance of effortlessness is key to this style’s success. Our short bob icon is US model Hannah Kleit, who takes Paltrow’s 90s side-parted bob and makes it infinitely cooler with choppy lengths and a little tousled volume. And when it grows out? We can aim for the Kaia Gerber long bob look. 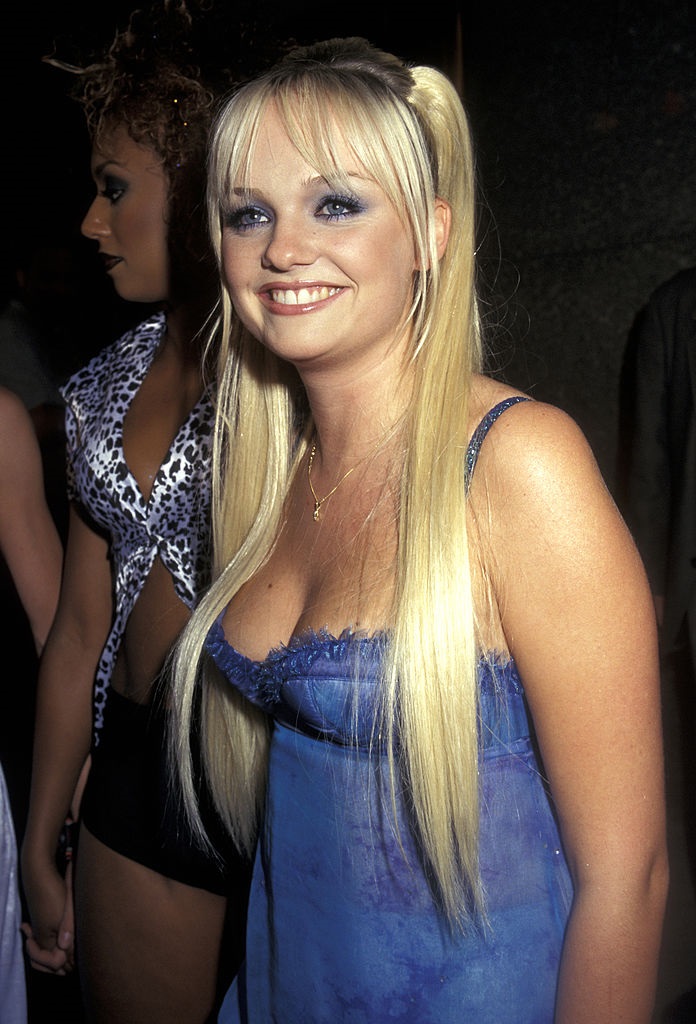 Whether it was Emma Bunton’s Baby Spice pigtails or Britney Spears in the Hit Me Baby One More Time video, grown women in pigtails became a thing in the 90s. But surely, 20 years later, we’re past that?

Two decades later and we’re most certainly not over pigtails. In fact, they’re having something of a revival for 2020, with an ironic retro edge.

Our current pigtail icons are Bella Hadid, who opted for the style to vote in the US election, and Maya Jama (above). Jama added a 90s hair-wrapped band to her pigtails, in a nod to the style that we worked for special occasions – like non-uniform days – in the actual 1990s.

Then: the pixie crop 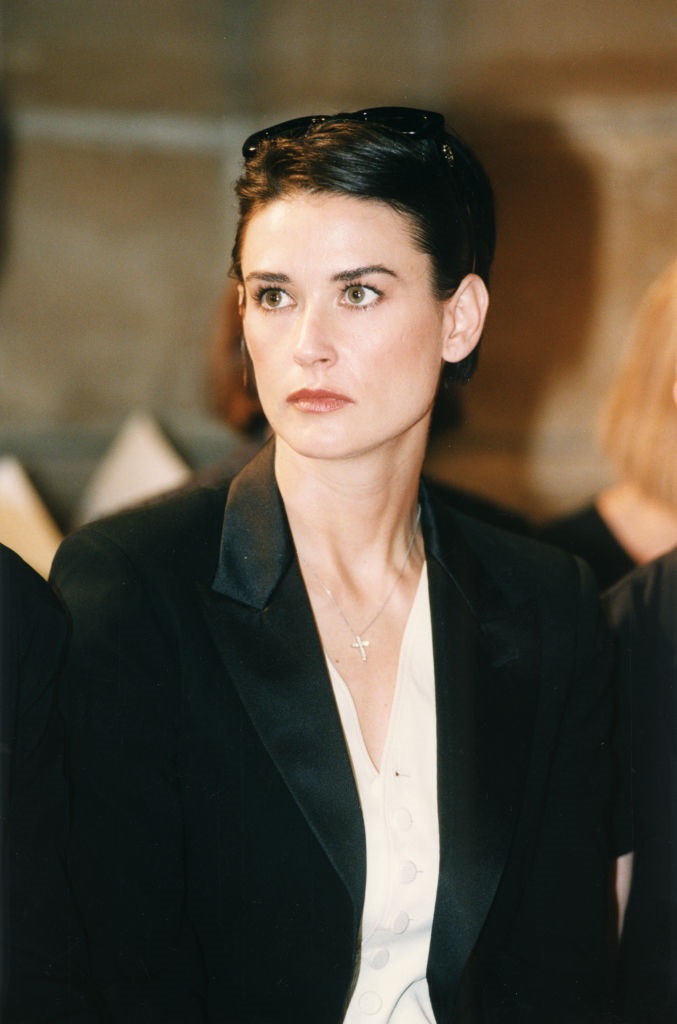 Demi Moore rocking the pixie crop back in the day

Thirty years later and no haircut still turns heads quite like a pixie crop. Pinkett-Smith has shown that this statement cut works at any age, still rocking a bleached pixie in 2020.

If you are ready to trial this 90s throwback but want an updated twist, look to Demi Lovato (above), who has blurred 90s and noughties lines with a side-swept grown-out pixie by Amber Maynard Bolt.

Then: the fancy high pony 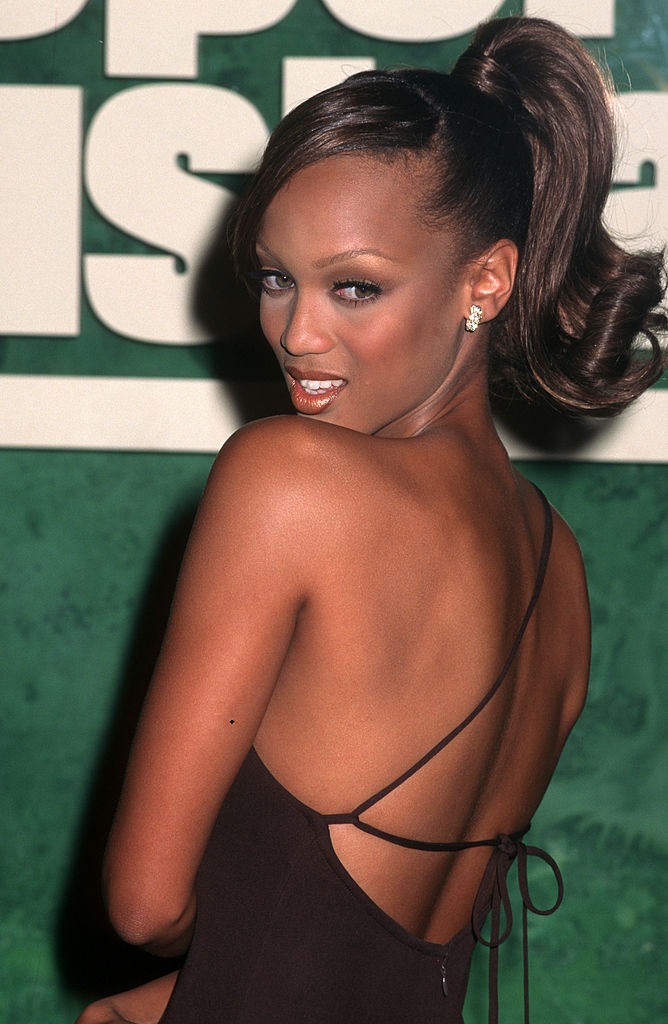 Let’s be honest: almost everything Tyra Banks did style-wise in the 90s could be lifted and recreated to great success now. But perhaps her most iconic look was the styled ponytail, which has been recreated over and over, complete with side-slicked bangs and blow-dried ends.

The ponytail is a forever favourite, not least because it works best on those in-between wash days. Translate Tyra’s high-polished pony to the everyday with a slightly more relaxed take on the trend. We love this curly version of the high pony worn with a scarf for an off-duty feel.

If it’s an evening ponytail that you’re looking to bring into the now, look no further than Ariana Grande (above) who is single-handedly flying the flag for ponytail lovers everywhere. 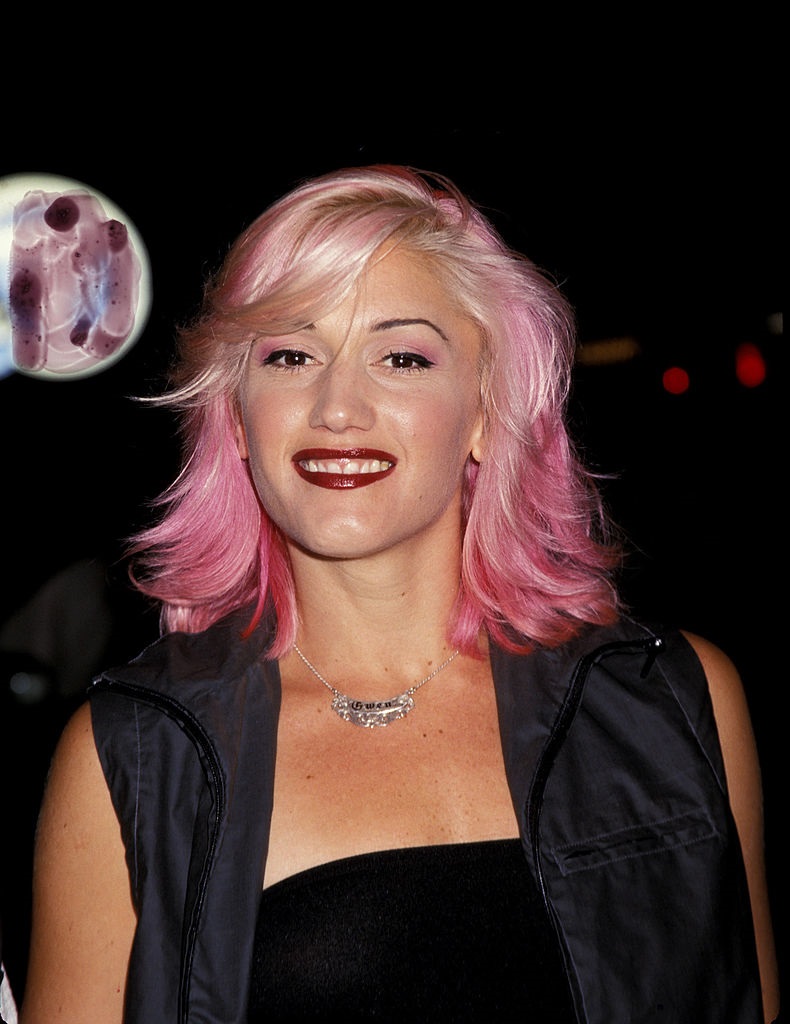 Gwen Stefani made us all think pink

Few stars experimented with their looks quite as much as Gwen Stefani in the 90s, and not many of her hairstyles turned more heads than her ombre pink dye job circa 1999.

The past couple of years call for finding the rainbow wherever you can. And if that means brightening your day with a bold dye job, so be it. It feels like everyone has trialled pink hair over the last year or so, from Dua Lipa to Lottie Moss (above), and Helen Mirren to Fearne Cotton.

So, how can you get in on the trend? Pink hair works best on lightened hair, meaning blondes or highlighted hair can hit the bottle in full confidence knowing that the colour will fade within a few weeks if you opt for a wash-out dye. And remember, pared-back tones work just as well as Stefani’s brasher hues. We love Kaia Gerber’s dip-your-toe-in approach.

Want more 90s nostalgia? Read about The Fresh Prince of Bel-Air reboot or remember the 16 weird things we all remember from playing The Sims. The 90s is the new now, after all.

Nobody's Waking Up at 5 a.m. Before School to Do Their Makeup Like You See on "Euphoria"