Home » Beauty » This Is How Psoriasis Appears On Black Skin, And How It Can Be Diagnosed And Treated

This Is How Psoriasis Appears On Black Skin, And How It Can Be Diagnosed And Treated

A whopping 125 million people worldwide are living with psoriasis, so you’d think there would be more comprehensive info out there about it. Unfortunately, nope. There’s still plenty of confusion…not to mention skewed representation of the condition as only really affecting people with white skin.

In fact, psoriasis affects 1.9 percent of the African American population in the U.S. and 1.6 percent of the Hispanic population, as compared to 3.6 percent of Caucasians, according to one study published in the Journal of Clinical and Aesthetic Dermatology. But despite the fact that the condition can affect anyone, examples of psoriasis in medical textbooks and references are often shown on lighter skin tones, leaving a gap in understanding how psoriasis shows up on deeper skin.

“While many psoriasis patients can point to a family history, others report no one in their family that is afflicted with psoriasis,” says board-certified dermatologist, Corey L. Hartman, MD, the founder of Skin Wellness Dermatology in Birmingham, Alabama.The skin condition can develop at any time and in anyone.

Ahead, two board-certified dermatologists break down how to better understand how this chronic skin condition affects Black skin specifically—from how it appears on darker skin to how to keep it under control. 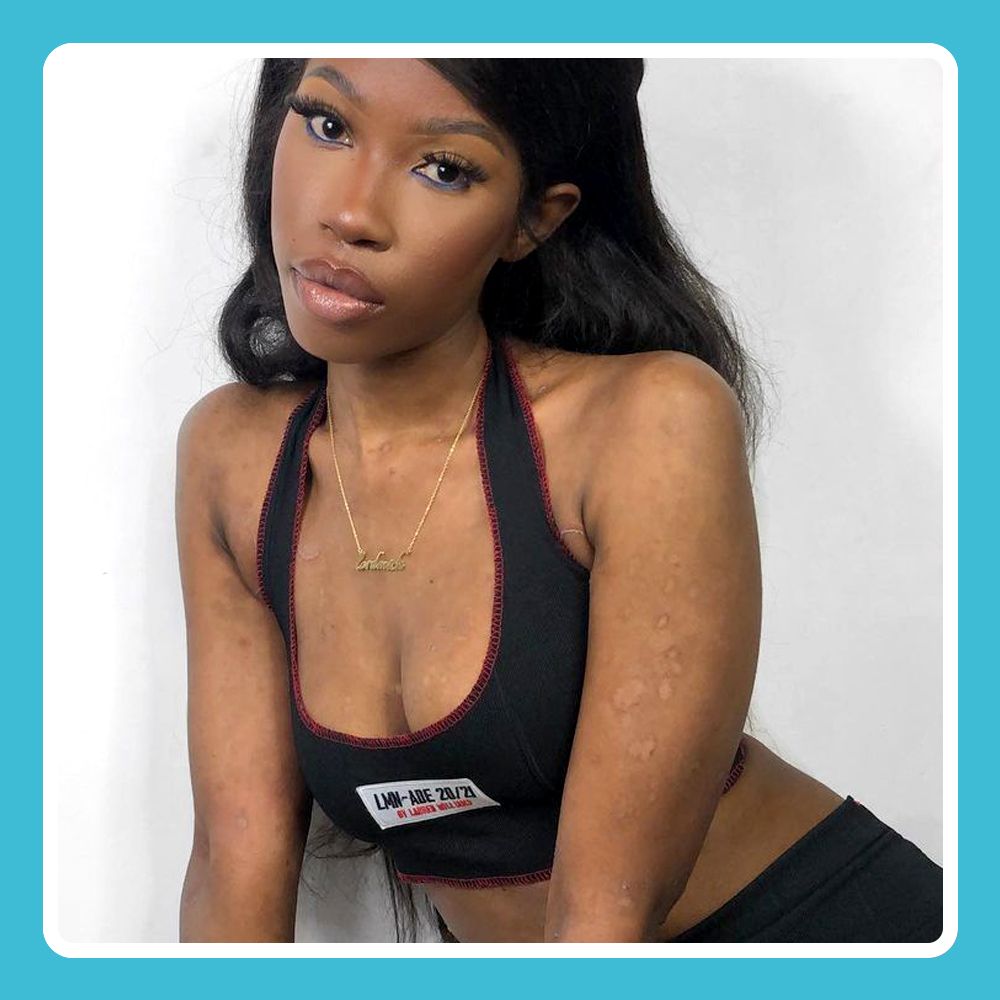 Psoriasis manifests itself as scaly patches that are often painful and itchy—and this looks different on different skin tones.

Stress, illness, or injury to the skin can all cause flare-ups, says New York dermatologist Tiffany Jow Libby, MD.

On white skin, this often appears as thick red plaques that have a silvery scale and are most commonly found on the arms, shoulders, chest, and legs, says Dr. Hartman.

On patients of color, the redness of psoriasis skin lesions can appear more subtly and often presents as a purplish-gray or dark brown color, says Dr. Libby. And while the scaliness of these lesions is still present, it usually appears as white or gray, she adds.

The after-effects of psoriasis flare-ups are different in darker skin, too. “When psoriasis lesions resolve, they may also leave a patch of discoloration, either a dark or lighter-colored spot, that tends to linger for months,” she says.

“Studies show that when African American patients do have psoriasis, they often have more extensive disease involvement as compared to Caucasian patients,” Dr. Libby says.

That means it’s a good idea to be vigilant about spotting symptoms and bringing them to your doctor’s attention.

“Look for well-demarcated areas of flaking dry skin that may have some redness or purple-fray associated with it,” suggests Dr. Libby. You’re most likely to find these lesions on the scalp, elbows, knees, torso, buttocks, and even nails, but they can appear in other places, too.

These lesions may appear locally in small areas of the body or in a more widespread distribution, Dr. Hartman adds. The patches can also be itchy, painful, and even pus-filled.

The same treatments stand, no matter what the patient’s skin tone may be.

Thankfully, there are a variety of options when it comes to treating psoriasis. You can combat the condition with topical steroids and phototherapy or with oral medications and biologics (essentially an injectable drug) for more severe cases. “I [tend to prescribe] the biologics, because of the superior way that they control the disease with a simple injection every few weeks,” Dr. Hartman says. Most of these medications can be self-injected, so you can safely administer them at home to treat your psoriasis without worrying about frequent trips back to the doctor’s office.

Coping with psoriasis in between treatments can be tricky since there’s no true cure for the condition, but there are topical remedies like these soothing dermatologist-approved lotions that might provide some relief in the meantime.

The bottom line: This immune disease might be more prevalent in patients with lighter skin, but people with Black skin can also suffer from psoriasis and are more likely to have severe cases of it if they do. Lesions can look purple-gray or dark brown. If you think you may have psoriasis, check with a derm.

The Woman With the Longest Nails in the World Cut Them After 30 Years, and There's a Video