Why Black Women Are Turning to the UK For Beauty Tips

The beauty industry is in its global Gold Rush, having exploded into a multi-billion dollar business throughout the past decade. Despite the boom in new brands and products, Black makeup lovers still lack ample representation, shouldering the burden of fighting for their own visibility on shelves and screens alike. While they shouldn’t have to, “UK Black girl makeup” is the viral beauty trend helping Black creators bridge the unnecessary gap for themselves.

With 13 million views on TikTok and counting, the #UKblackgirlmakeup hashtag is home to thousands of videos highlighting the trend. Taking cues from the classic “soft glam” routine, UK Black girl makeup is a full-coverage method that appears effortless: think brightly buffed undereye concealer, a precisely blended (and yet seemingly undetectable) foundation finish, and a sultry lash.

#UKblackgirlmakeup hosts step-by-step tutorials from the Black British creators who originated the look, and renditions from the American creators inspired by them. The final result is a flawless base that draws attention to the center of the face, rejecting the harsh contours of the late aughts and bringing back the soft-to-touch glam of the ’90s.

On its face, UK Black girl makeup is simply a makeup routine. However, the trend archives a special community forming between Black women with thousands of miles between them. If you’ve ever walked into a ladies’ restroom on a late night out, you’re likely to run into a group of strangers-turned-besties singing each other’s praises. Tapping into the comments section on one of these TikToks evokes a similar sentiment, with Brits commenting a supportive “you’re one of us 🇬🇧” on an American creator’s take, while stateside users praise the talents of the “UK girlies.” A digital bond is solidifying over a shared love of Black beauty: one fan’s comment on a viral routine, posted by TikTok user @drealdior, reads “Once I heard the UK accent??? I trusted you.” 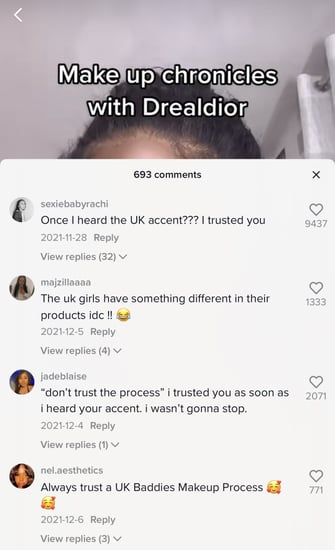 Lynette Dwaah, who goes by Melachild, created the trend’s most viewed YouTube tutorial, titled “REVEALING THE SECRETS BEHIND 🇬🇧 UK GIRL MAKEUP” and clocking in at over 190,000 views. Dwaah chalks up the trend’s high resonance to a long-awaited moment of recognition: being a full-time content creator, she has seen the difference in opportunities offered to non-Black beauty lovers or creators.

“We haven’t been included in a lot of makeup trends or beauty brands,” Dwaah said, commenting on the general lack of representation within the industry. “We’ve had to work with what was available to us.” But Dwaah is all for lending her UK-based expertise to the overseas alliance, sharing that she has a majority American audience on both YouTube and Instagram. As Black women have been continuously underserved in the space, she credits social media for “giving us an opportunity to tell our stories in real time.” Speaking to its massive reach, Dwaah said, “Why not use it to hype each other up when others haven’t for so long?”

Marche Graham, known as @marchesmirror on TikTok, is an American creator whose “UK Black Girl Makeup” tutorial garnered over 19,000 likes, flourishing on the British side of TikTok’s For You page. Her TikTok went live early in the trend, posted back in May of last year, but saw a major boost to her following in the past couple months.

“The look is all about bringing out our natural features, whereas old school beauty tutorials originally had a lot of strong lines that changed them,” she responded when asked about the trend’s popularity.

Notably, UK Black girl makeup is lighthanded on dark contours around the cheekbones and nose, applying brighter concealer to facial peak points instead and collaborating with deeper skin tones instead of working against it. Graham even adjusted her current makeup routine to include tips she received from fellow creators across the pond. When thinking about the longevity of the trend, Graham remarked that it’s here to stay, stating that Black women “are going back to reclaiming our fullness.”

The impact of this newly-formed allyship speaks to the disconnect between the beauty industry and the Black women it serves (or, more often, doesn’t serve). While the beauty boom ushered in a wave of celebrity-centered brands, Black beauty leaders have turned to their own communities when launching their initiatives. Diarrha N’diaye, the social-strategist-turned-CEO of clean beauty brand Ami Colé, sources models from within her local neighborhood of Harlem, citing Ami Colé’s customers as an integral part of the brand’s development. Seeing a missing space for Black and brown women to discuss beauty, Ronke Adeyemi turned a weekly Twitter conversation into Brown Beauty Talk, which is now the UK’s leading Black-focused beauty platform.

It’s no surprise that the UK Black girl makeup trend took off on TikTok given its picture perfect nature: another popular comment that lands on a successful tutorial is “✅ Flash Approved.”

Yet, the routine’s aesthetic and subsequent virality aren’t the only things worth celebrating. The camaraderie that UK Black girl makeup has sprung within creators during its growth is what stands out the most, and if the comments, follower counts, and millions of views are indicative of anything, it’s that a sisterhood that goes the distance has formed between Black beauty lovers. That alone is worth the click.

The Top 10 Deodorants Made For Those With Sensitive Skin