At the P.G.A. Championship, Lizette Salas Finds Her Groove

ATLANTA — After an almost flawless opening round on Thursday at the KPMG Women’s P.G.A. Championship, Lizette Salas mentioned that she is reading “I Am Not Your Perfect Mexican Daughter.”

The young adult novel, written by Erika L. Sánchez, reads like nonfiction to Salas. “I thought it was a biography of myself,” she said.

Salas’s bogey-free round of five-under-par 67 at Atlanta Athletic Club’s Highlands Course was her lowest round ever in a major, and it looked effortless. But then Salas, 31, is so well practiced at performing like a well-oiled machine, no one would know of any issues under her hood.

The California-born Salas, who was in the morning wave of players, led after the first round by one stroke over Charley Hull, who started in the afternoon. A stroke behind Hull was a group that included the Canadian Alena Sharp, whose seven one-putts, including a 39-footer for birdie on the penultimate hole of her round of 69, left her hopeful that she had conquered her recent putting yips.

“I was feeling it a little bit last year, and then I didn’t really deal with it,” Sharp said. “I thought it would just go away.”

But the putting woes persisted, prompting a frustrated Sharp to tear up on the greens at the first women’s major of the year, the ANA Inspiration.

“My anxiety was so high at ANA,” said Sharp, who has focused the past two months on rooting herself in the present, instead of worrying about outcomes, by attuning her senses to birdsong and wind and the ground beneath her feet. 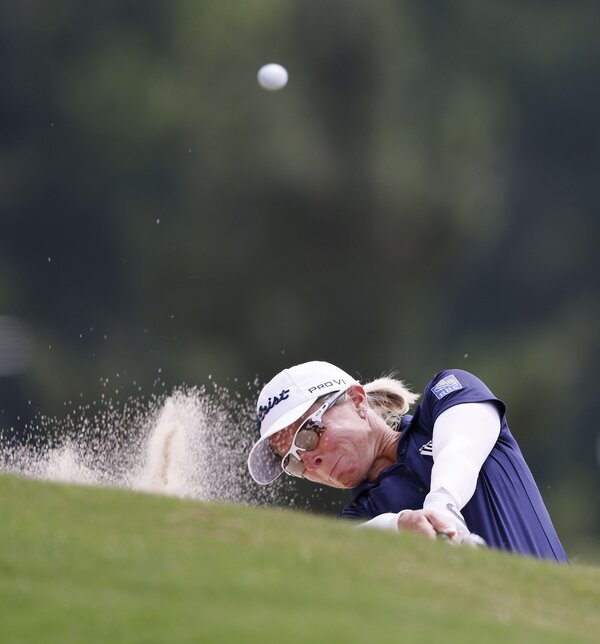 Salas said she had experienced anxiety and a general decrease in her mental health since the start of the coronavirus pandemic. .

During the L.P.G.A. tour’s five-month shutdown, Salas grappled with these existential questions: If she is not a professional golfer, what is she? What is her worth if she is not a Latina of influence on the sporting stage?

“I really didn’t like myself in 2020,” said Salas, who added, “It was the accumulation of a lot of other things.”

With Los Angeles-area golf courses closed because of coronavirus protocols, Salas settled in with her family. She spent two months home-schooling her nephew, who was in the second grade, and said nothing to her loved ones about her growing anxiety.

Her silence, she said, was based on her belief that she had no reason to feel sorry for herself, not when she was surrounded by people who loved her and was succeeding in the career that she had set her sights on in high school.

When the L.P.G.A. season resumed last July, Salas dismissed her heightened anxiety as nerves. But as the weeks wore on, she said, “It was so bad that the golf couldn’t help.”

Salas made 10 of 12 cuts after the 2020 restart but never finished higher than a tie for 10th at the Women’s Australian Open that February, her lone prepandemic start of the season.

“When I saw that I wasn’t getting the results I wanted, it ate me up,” Salas said.

She added: “Instead of asking for help, I pretty much shut people out. That was not the right way to do it, and I acknowledge that.”

Salas relocated to Dallas last year for a change of scenery, but the move was short-lived. She returned to Los Angeles, confided in her parents, trainer, coach and agent and found great comfort in discussing her mental health struggles.

“I also learned when I can ask for help and when is it OK to be vulnerable and uncomfortable,” Salas said. “I just understand myself more, and I’m at a point where I like myself again, even when days aren’t as good as others.”

Salas, a one-time L.P.G.A. tour winner, has two top-six showings in her past four starts. In her final tuneup for the Women’s P.G.A. Championship, she posted three sub-70 rounds to finish tied for sixth at the L.P.G.A. stop in Michigan last week.

Upon arriving at the interview area on Thursday, the 5-foot-4 Salas waited as the microphone was lowered several inches. She laughed and noted, “It’s really not good for my confidence when they have to lower the microphone stand.”

Salas had planned to speak about her mental health earlier in the year. “But I wasn’t ready,” she said, adding: “I’m not going to lie. I’m a little nervous even talking about it now, but it’s OK. And I’m in a much better place. Just happy to be here.”