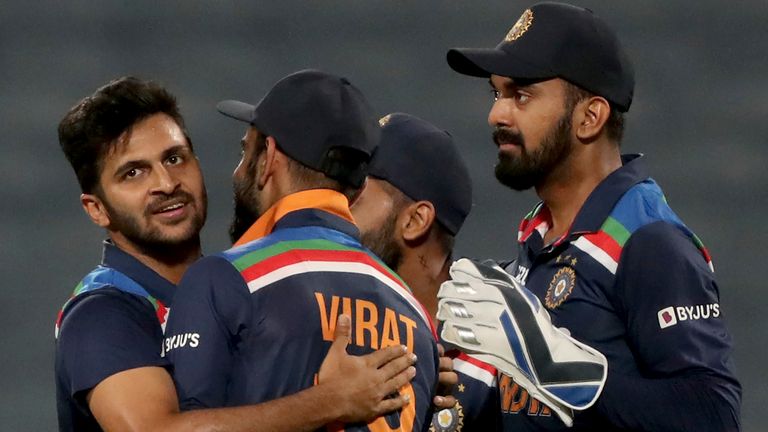 India take a 1-0 lead in the three-match ODI series with England after a middle-order collapse from the touring side saw them sputter to a 66-run defeat in the first game in Pune.

Chasing 318 to win, Jonny Bairstow smashed 94 from 66 balls at the top of the order for England, sharing in a 135-run opening partnership with Jason Roy (46 off 35). But, with the pair rattling along at close to 10 runs an over, Roy’s departure in the 15th sparked a steady clatter of wickets and the visitors were ultimately skittled for 251 inside 42.1 overs.

Earlier, an emotional Krunal Pandya (58no off 31) impressed on his ODI debut as he and KL Rahul (62no off 43) each fired fifties in reaping 112 runs from the final 10 overs of the innings.

The home side had too suffered a mid-innings wobble off the back of a century stand for the second wicket between Shikhar Dhawan (98) and Virat Kohli (56); Ben Stokes (3-34) and Mark Wood (2-75) chipped away with important wickets to reduce India to 205-5 before Krunal and Rahul came together and took over.

The powerplay is over and England are flying at 89-0 with Bairstow 49no. Here's how he took Prasidh apart a few overs ago!#INDvENG 🇮🇳🏴󠁧󠁢󠁥󠁮󠁧󠁿

Eoin Morgan had put India in to bat after again winning the toss, and though Dhawan and Rohit Sharma built a solid foundation for the team, their opening stand was a rather sedate one – certainly in comparison to the blistering batting on display from Bairstow and Roy later on.

But, despite their best efforts, England’s middle-order couldn’t contribute with any substantial innings to see them over the line.

Watch the second one-day international between India and England, live on Sky Sports Cricket from 7.30am on Friday.