For Kim Ng, Getting the Job Wasn’t the Point. ‘I’ve Got to Do It Well.’

Jose Altuve was the little guy and Aaron Judge was the big guy. Max Scherzer was the guy with different-colored eyes and Mike Yastrzemski was the guy with the famous grandfather. None of them were pioneers, but at first they stood out for something beyond their control. They forged their own identities by playing like stars.

That is the challenge now for Kim Ng as she settles into her job as general manager of the Miami Marlins. Her hiring in November made Ng the first woman to be a full-time general manager in any of the major men’s sports leagues in North America, a momentous occasion that earned her widespread recognition for breaking a persistent barrier. Ng’s story, for now, is mostly viewed within that framework.

But getting the job was never the point for Ng. For all of the big-picture meaning of her position — the “Today” show visited Ng for a feature this week — a general manager’s duty is to immerse herself in the details of one team. That is what consumes Ng, 52, after waiting three decades for the chance.

“I do have something to prove; I take that very seriously,” she said in a phone interview this week from the Marlins’ training complex in Jupiter, Fla. “But I didn’t want this job because I would be the first. I wanted the job because I thought I could do the job well, and it’s something that I’ve wanted for a long time. So now that I have it, I’ve got to do it well, period.”

Ng, a former assistant general manager of the Yankees, inherits a team with a pinstriped pedigree — Derek Jeter is the chief executive, and Don Mattingly the manager — that is coming off a long-awaited taste of success. The Marlins went 31-29 last season to earn their first playoff berth in 17 years, overcoming an early outbreak of 20 coronavirus cases in their traveling party. 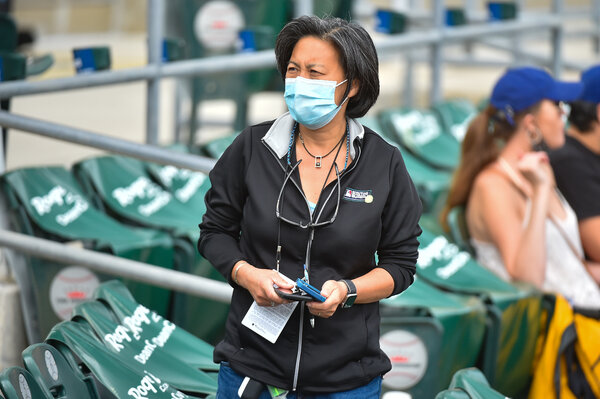 In doing so, they accelerated their rebuilding plan. When the team’s president of baseball operations, Michael Hill, reached the end of his contract, the Marlins turned to Ng to help direct the next phase.

“The team, through their resilience and their grit last year, moved the bar up, for sure,” Ng said. “So I think there is some expectation, internally as well as externally, that the Marlins are going to compete on an everyday basis. I’m not saying that this lineup is going to go out and pound every night, but I do think that we will compete every night, and we’ll be involved in a lot of close games. That’s where the bullpen will really come into play.”

Ng stayed busy this off-season, but her moves were easy to miss. The Marlins’ projected 40-man roster payroll (for competitive-balance tax calculations, per Baseball Prospectus) is only $78.2 million, less than half of the estimates for their division rivals in New York, Philadelphia and Washington and just barely more than half of what Atlanta will spend. Only one Marlins player, reliever Anthony Bass, is signed beyond this season, with the team holding option years on two others.

Ng said the Marlins were like most other teams in their need to spend wisely and take advantage of value in the market. To that end, she quietly added five relievers — Bass, Adam Cimber, John Curtiss, Ross Detwiler and Dylan Floro — who combined for a 2.89 earned run average last season and together will earn less than $6 million in 2021.

“It hasn’t been with the high-profile big names, but we think we got a good mixture of guys and added some different looks,” said Mattingly, who will also lean on Richard Bleier, Yimi Garcia and James Hoyt out of the bullpen. “Under-the-radar stuff, but I think it makes us better as a whole.”

The Marlins also believe they found value in outfielder Adam Duvall, a former All-Star who had a .545 slugging percentage for the Braves over the past two seasons. Duvall signed for one year and $5 million, with a team option for 2022, and joins an outfield with two other former All-Stars, Corey Dickerson and Starling Marte.

For a roster with only two players — third baseman Brian Anderson and shortstop Miguel Rojas — remaining from 2017, when a group led by Bruce Sherman bought the team for $1.2 billion, the relative stability is a welcome change.

“Over the last couple of years, we’ve kind of had a revolving door as far as our position players go, but we’ve really solidified our lineup,” Anderson said. “Adding big bats like Corey Dickerson, Jesus Aguilar and Starling Marte, they just really round out our lineup right now. We feel like we can go up against anybody in the N.L. East, especially when you add on top our good young pitching.”

The Marlins are hoping for a breakout season from Jazz Chisholm or Isan Diaz, promising young players competing for the second base job. But however it looks, the lineup is unlikely to stand out against a divisional backdrop loaded with sluggers. The Marlins’ hopes rest mainly on their pitching rotation, which is how Ng prefers it.

“Whether it was my time with the Yankees or my time with the Dodgers, we were always about pitching,” said Ng, who followed her Yankees years with a decade in Los Angeles. “Everything really revolved around the pitchers. The managers that I’ve worked with have all been very pitching-centric.”

The Marlins’ top four starters — Sandy Alcantara, Pablo Lopez, Elieser Hernandez and Sixto Sanchez — combined for a 3.35 E.R.A. in 31 starts in 2020. But only Alcantara has worked even 115 innings in a major league season, underscoring the need for the new relievers to help coax the Marlins’ starters through a full schedule.

“Our plan is to monitor very closely what they do,” Ng said. “There could be times when we could maybe skip them in the rotation, there are times where we might not necessarily push them late into the game even though they might be able to. There are ways to manage their innings so we can get them through September, and we’ve talked about those.”

Mattingly said emphatically that no pitcher would be shut down because of a predetermined innings limit, as Washington did with Stephen Strasburg in 2012, when the Nationals won their division but lost their first-round playoff series.

The Nationals’ cautious approach eventually paid off; they became a perennial contender and, finally, a World Series champion in 2019. Building a similarly consistent winner with the Marlins, who have never had more than three winning seasons in a row, would raise Ng’s profile in a different way: for what she does in the job, instead of her simply having it.

“If you don’t do this job well, whatever that is — the experiment, the step that someone took — it’s not going to play well,” she said. “But, honestly, I don’t even think that way. It’s really just doing the job well and trying to get the best possible team together that we can, given our circumstances. That’s what we’ve got in front of us.”