OTTAWA — In an instant 30 years ago, a huge piece of Walter Gretzky’s legacy went missing.

Gretzky, the father of the greatest hockey player of all time, had an aneurysm while painting his mother’s farmhouse in Southwestern Ontario, Canada. An ambulance and a nearby hospital saved his life, but when he came to he could remember not a single one of his son’s extraordinary feats.

It was as if someone had accidentally deleted the folder holding Wayne Gretzky’s four Stanley Cups, dozens of National Hockey League records, even his 1988 trade from the Edmonton Oilers to the Los Angeles Kings.

“It’s like I was asleep for 10 years,” Walter Gretzky told The Ottawa Citizen in a 1994 interview. “It’s all kind of like a dream.”

He said he tried to recapture those precious father-son moments through video, “but it was not the same.”

Walter Gretzky — widely known as “Canada’s Hockey Dad” — died Thursday night in Brantford, Ontario, after a nine-year struggle with Parkinson’s disease. He was 82. 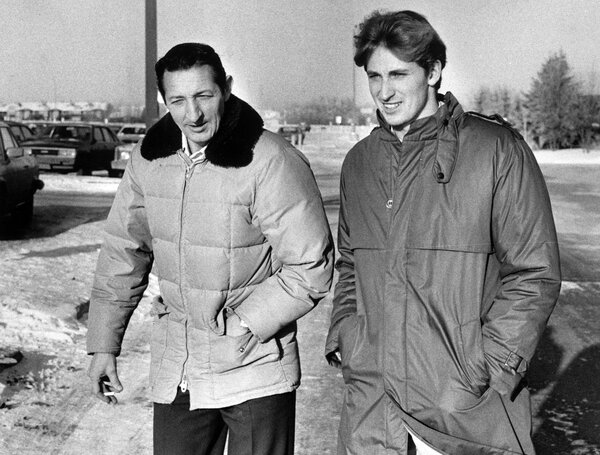 Prime Minister Justin Trudeau of Canada tweeted: “Walter Gretzky cared deeply about his family and his community — his kindness was undeniable, his passion was obvious, and his impact was immense. My thoughts are with Wayne and the entire Gretzky family, and all who are mourning the loss of Canada’s hockey dad.”

Indeed, it seemed the entire country was grieving this small man with the crooked grin and prominent nose. Gretzky became a hockey icon himself over the decades, appearing in television commercials and at charitable events. Obliging, humble and supportive, he was an ideal model for hockey parents, many of whom lose control and a sense of reality while encouraging their children to excel in the sport that is Canada’s national obsession. He was the hockey parent you wanted in the stands.

Wayne Gretzky, who was a Ranger when he retired in 1999, released a statement on Friday saying: “For my sister and my three brothers, Dad was our team captain — he guided, protected and led our family every day, every step of the way. For me, he was the reason I fell in love with the game of hockey. He inspired me to be the best I could be, not just in the game of hockey, but in life.”

Walter Gretzky was predeceased by his wife, the former Phyllis Hockin, in 2005. He is survived by their five children: Wayne, Keith, Glen, Brent and Kim, and several grandchildren.

The Gretzky home at 42 Viradi Ave., in Brantford, has become something of a national shrine over the years. Walter Gretzky happily welcomed strangers wishing to see the backyard where the rink known as “Wally’s Coliseum” started a 3-year-old Wayne on his way to hockey superstardom.

The family had one golden rule — “Get your homework done first” — and then everyone could play as long as they wanted, on what Wayne’s father liked to call “glass ice.”

“He would be out here hour after hour,” Walter Gretzky told The Globe and Mail in 2008, “twisting in and out between pylons we made from Javex bottles. He used to tie a can off a string and hang it in the net and see how many times he could hit it. He used to pay kids a nickel or a dime to play goalie for him.”

“I rode with my Dad,” Wayne Gretzky said in a broadcast interview. “It was like my first game when I was 6 years old.”

It was Walter who told Wayne to “skate to where the puck’s going and not to where it’s been.” As a 10-year-old, Wayne Gretzky scored 378 goals for the Brantford Nadrofsky Steelers, and he became known nationally before reaching his teens. He retired from the N.H.L. as its scoring leader, with 894 goals and 1,963 assists in 1,487 games; all told, he held 61 scoring records.

The superstar son always maintained that he developed his game “right in my own backyard,” under the tutelage of his father. Walter Gretzky had been a fine young player in his own right, but at 140 pounds he was considered too small to move into Junior A hockey, then the traditional route to a professional career.

He turned his attention to coaching his children, all of whom excelled in a variety of sports.

Walter Gretzky was active in multiple causes, raising more than a million Canadian dollars through annual golf tournaments for the Canadian National Institute for the Blind. In 2007, he was named to the Order of Canada, the country’s highest civilian honor, for his charitable work.

“It’s not that hard to be ‘Canada’s Dad’ if you’re already the father of the greatest player ever,” Charlie Henry, Walter Gretzky’s closest friend for more than 50 years, said in an interview on Friday.

The two men, born within two weeks of each other in 1938, met in the stands at a minor hockey tournament when Henry took note of the slick young player from Brantford wearing distinctive white gloves.

“That kid’s going to be a great player,” Henry said to those standing with him, “but if you have to play with white gloves that glow in the dark, I don’t know …”

“That’s my kid!” Walter Gretzky snapped from a few rows away.

The two quickly made up and grew close, and Henry frequently traveled with Gretzky, particularly after his recovery from the aneurysm.

“Wally would have flashes of memory,” Henry said. “Like his first pair of skates. Or his wedding. But Wayne’s hockey was gone.”

Wayne Gretzky wrote extensively about his father in his 1990 book, “Gretzky: An Autobiography."

“My hero as a kid was a man with constant headaches, ulcers and ringing in his ears,” he wrote. “He’s a funny little guy who stays up drinking coffee every night until 3:00 in the morning even though he’s got to be at work at 8:00 the next day. He doesn’t have to work if he doesn’t want to, yet he never misses a day.

“He was my hockey instructor. He was also my lacrosse, baseball, basketball and cross-country coach, not to mention my trainer and chauffeur. He’s still my coach, but he’s also my agent, manager, amateur lawyer, business partner and best friend. He doesn’t have a college degree, but he’s probably the smartest guy I know.”

Later, in a 1996 interview with the Canadian Broadcasting Corporation, Wayne Gretzky put all that into a single sentence:

“Everything I am is because of him.”