Home » Sport » How Lee Westwood made £4.1m this year alone with Brit in stunning form after narrowly missing out on The Players win

How Lee Westwood made £4.1m this year alone with Brit in stunning form after narrowly missing out on The Players win

LEE WESTWOOD may be suffering from a maddening case of second-it is, but he is definitely No 1 in both the happiness and popularity stakes.

Westy’s incredible exploits, with his 48th birthday looming up next month, has earned him a new army of fans. And he is playing with a huge smile on his face. 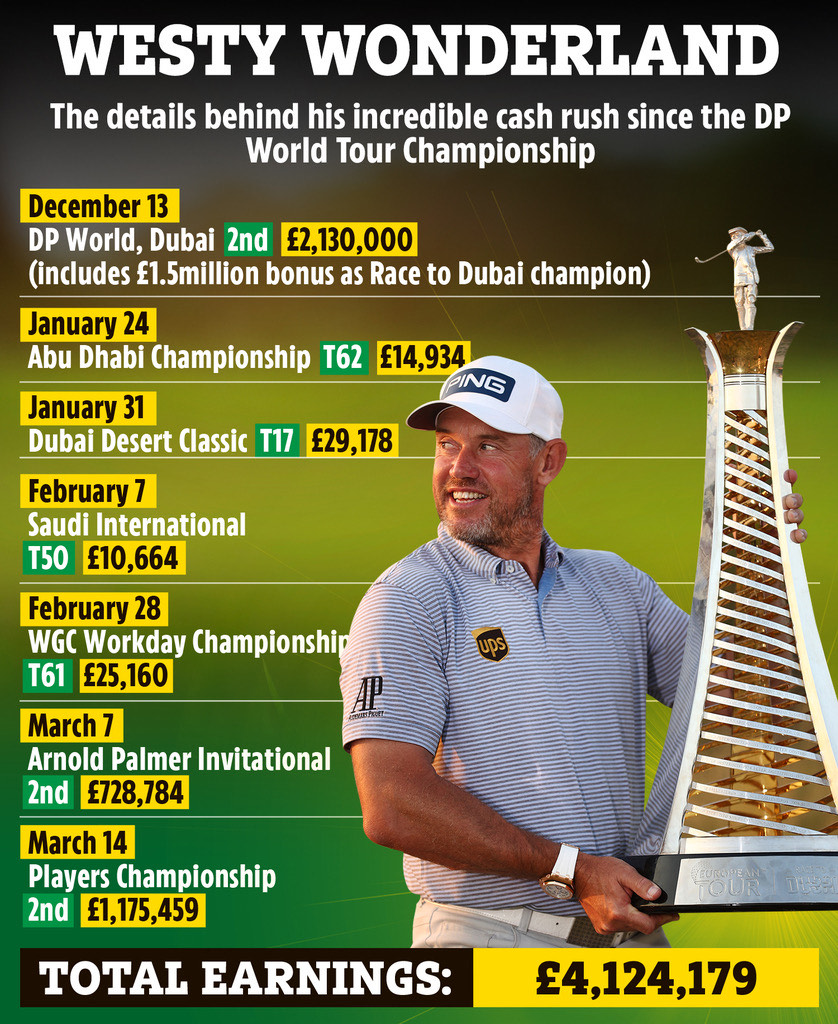 The crowd support shone through with the roar that greeted his birdie at the iconic 17th at Sawgrass on Saturday – and the groans when he three-putted the same hole 24 hours later, effectively handing the Players Championship title to Justin Thomas.

Westwood is also proving a huge hit with his bank manager, after earning more than £4miillion in the last three months.

That represents the biggest cash spree of his glittering career, even though he has not managed to add to his 44 professional victories.

It means paying for his wedding to fiance’ Helen Storey – who has been gathering her own army of admirers as Westy’s caddie – will be no problem.

They were due to marry last year, but postponed it because of the coronavirus restrictions, and are now planning to tie the knot in May.

Helen’s calming influence has been a massive factor in Westwood’s resurgence, and helped him to deal with the frustration of losing out by just a shot in three huge tournaments.

Everybody keeps telling me how old I am. But it doesn’t seem such a big deal considering how well I’m playing

You would never have known Westwood has had to deal with such crushing disappointment as there is a real spring in his step these days, on and off the course.

He said: “Everybody keeps telling me how old I am. But it doesn’t seem such a big deal considering how well I’m playing.

“Yes, I'm 48 in a month's time. But I'm still out here contending for tournaments, and playing in final groups with great players like Bryson DeChambeau and Justin Thomas.

“It's just a joy to be involved and still playing well and being able to contend. And having Helen out there with me is a huge help.

“At this stage of my career there's not a lot a caddie can tell me. But obviously Helen gets me in a fantastic mood out there. And psychologically, she can help me and say the things that I need to hear.

“She helps me in that aspect an immeasurable amount. And I'm just having so much fun."

DeChambeau, who overturned Westwood’s narrow 54 hole lead at Bay Hill to push him into second – before Thomas did the same thing at Sawgrass – describes Helen as “definitely Lee’s secret weapon”.

But it is not just the emotional side of things that has changed for Westy.

His chipping – his Achilles heel throughout his career – has improved, through sheer hard work, and switching to the claw grip has helped him hole loads more clutch putts.

The only frustration is his failure to add to his win tally, since he chalked up victory No 44 by putting Dustin Johnson and a host of other top players in their place in Abu Dhabi 14 months ago.

Since then the near-misses have been painfully reminiscent of Westy’s fate in the Majors, where he has clocked up a record nine top three finishes without actually claiming the big prize.

His latest run started when he was pipped by Matthew Fitzpatrick at the DP World Tour Championship – although finishing the year as European No 1 for the third time, twenty years after his first success, was a welcome consolation.

DeChambeau and Thomas both denied Westwood in the space of eight days, but as well as the huge cheques there have been other consolation prizes.

The Worksop Warrior has piled up more than 115 world ranking and Ryder Cup qualifying points in his three month spree. He has virtually guaranteed his spot on Padraig Harrington’s team to face the Yanks in September.

He is fifth on the overall European list, but tops the world points category – and already has more points than Thorbjorn Olesen needed to claim the final automatic place in 2018.

The former world No 1 has also improved his ranking from 47th to 19th, the first time he has been inside the top twenty since October 2013.

Westwood is currently enjoying two days at Augusta, playing alongside 19 year old son Sam, who will caddy for him in next month’s Masters.

Westy already knows Augusta like the back of his hand, after finishing runner-up there twice – and if he can maintain this purple patch, there would be no better place for him to overcome that painful bout of second-itis.